When law firm Porter Wright told a federal judge in Pennsylvania late Thursday that it would no longer represent the Trump campaign in its challenge of the state’s election results, it why.

The Trump campaign had no such reluctance.

“Leftist mobs descended upon some of the lawyers representing the president’s campaign and they buckled,” Communications Director Tim Murtaugh said of the firm, , in a statement Friday morning. “The president’s team is undeterred and will move forward with rock-solid attorneys to ensure free and fair elections for all Americans.”

While it was not immediately clear whether Porter Wright had withdrawn from all of the Trump campaign suits, its decision puts the spotlight on , a much bigger and more influential firm, which has come under the same pressure to drop election-related cases. And the question now is, will they also “buckle”?

Scrutiny of the two firms intensified on Tuesday when the Lincoln Project, a group of Republicans who oppose President , sent out the word to its 2.7 million Twitter followers: Attack the lawyers and law firms helping the Trump administration contest Joe Biden’s victory. The group posted photos, office numbers and email addresses of attorneys and encouraged its backers to deluge them with LinkedIn messages to get them to stop working on Trump’s behalf.

Not content with a campaign against Jones Day, the nation’s 10th-largest law firm, the Lincoln Project also went after its big corporate clients, demanding that they pull their business from it. The century-old firm’s long client list includes some of the biggest names in American business, among them ’s Google, ,, and , the parent of Bloomberg News, is also a Jones Day client.

It’s another example of how, amid movements like and #MeToo, prominent companies can’t avoid getting embroiled in social issues. Now the question is not only where a firm stands on equality and diversity but also which political faction it supports. And it’s a warning that businesses may increasingly be forced to choose a side in the most polarized America since at least the 1960s.

Jones Day didn’t respond to requests for comment on Friday. Its corporate clients have either declined to comment or not responded to inquiries about their use of the firm, which put out a on Tuesday saying it “is not representing any entity in any litigation challenging or contesting the results of the 2020 general election.”

That is true, but the Trump campaign has filed to intervene in a case in which Jones Day is representing the Pennsylvania Republican Party in its challenge of mail-in ballots that arrive after Election Day. That case went to the Supreme Court before the election and the court voted 4-4, leaving the rules in place. The case could be heard again with a court that now has nine justices.

Lawyers in the Washington office as the firm held conference calls Friday to discuss its role in the lawsuit, according to participants who asked not to be identified discussing internal communication. , the office’s partner-in-charge, defended the firm’s involvement, but said it wouldn’t get involved in any additional litigation related to the 2020 election. 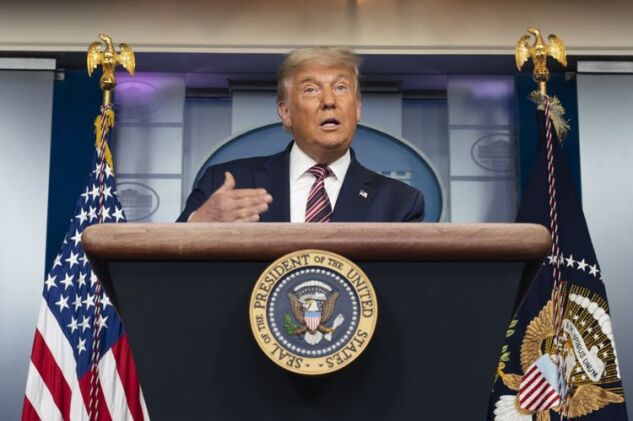 Not mentioned in the Lincoln Project effort is the fact that more than 80% of campaign contributions from Jones Day employees went to Democrats in the 2020 election, or that one of the firm’s attorneys is on the transition team for President-elect .

Jones Day is officially based in Cleveland but has become a legal power player in the nation’s capital. The 127-year-old firm’s lawyers regularly argue cases before the Supreme Court, including a recent challenge to the Affordable Care Act. The firm aggressively recruits lawyers with high-court experience, hiring 55 former Supreme Court clerks in the last 10 years, along with a slew of seasoned appellate attorneys.

Jones Day had more than $2 billion in gross revenue last year, according to The American Lawyer. Its annual profit per partner was $1.12 million -- only 74th in the country, because it has a larger share of lawyers who are equity partners than many other large firms do.

The firm is helmed by Managing Partner , a hard-nosed leader who isn’t likely to be swayed by public pressure. Only the seventh managing partner in Jones Day’s history, he makes many of the firm’s decisions with little or no input from its more than 900 partners, according to two former partners who asked not to be identified discussing the firm.

Brogan didn’t respond to an email or voicemail seeking comment on the pressure campaign.

Brogan, who was named managing partner in 2002 and has passed the firm’s historical mandatory retirement age of 65 for its leader, rarely speaks to the news media and doesn’t do a lot of public appearances. Jones Day is known in the industry for guarding its inner workings, including how it recruits and pays its attorneys.

As of Oct. 19, Jones Day had received $2.9 million in legal fees from the Trump campaign and the Republican National Committee combined, according to Federal Election Commission records.

One Jones Day lawyer, who asked not to be identified for professional reasons, expressed moral qualms over the firm’s work on behalf of Trump. Several senior lawyers also have reservations, the New York Times reported earlier this week.

The firm’s ties to the Trump administration are extensive, starting with former White House counsel , who returned to Jones Day last year. , the partner leading the lawsuit on behalf of the Pennsylvania Republican Party, was an assistant attorney general for civil rights in Trump’s Justice Department. , the president’s former solicitor general, left the administration to return to Jones Day earlier this year.

Some former Jones Day lawyers remain in the Trump administration, including , head of the Justice Department’s Civil Rights Division, who is leading the charge against in a alleging that the college discriminates against White and Asian-American applicants.

Prominent veterans of Democratic administrations work for the firm as well. , an ambassador during the Obama administration, returned to the firm after his time in government. , who was acting chief of the department’s Civil Division under President , currently works at the firm. Its primary lobbyist is Samir Jain, who was senior director for cybersecurity policy in the Obama White House before joining the firm in 2017.

The firm has represented one company -- , which is from the Trump administration -- in its federal lobbying efforts in 2019 and 2020.

Political donations by Jones Day employees have been split among Democrats and Republicans over the years, but in the recent election they skewed strongly Democratic. Employees donated just over $10,000 to Trump’s 2020 campaign and almost $300,000 to Biden’s, according to data from Open Secrets.

In all, Democratic candidates and committees received 82% of the $1.19 million Jones Day employees contributed during the 2020 election cycle.

“Their efforts to try and attack law firms and lawyers from representing Trump or any unpopular client goes against the central idea that lawyers represent clients to the best of their ability, no matter how popular or unpopular the client may be,” said King, who retired in 2014 after 24 years at the firm.