Welcome back to the Big Law Business column on the changing legal marketplace written by me, Roy Strom. Today, we look at what it takes to crack the lucrative, high-end bankruptcy practice. Sign up to receive this column in your inbox on Thursday mornings.

Big Law firms are bolstering their bankruptcy practices as the odds of a recession increase.

The top 100 firms hired nearly 120 restructuring lawyers in the second quarter, more than any such period in the past two years, when large bankruptcies hit historic lows, data from law firm and attorney analytics company Firm Prospects show.

Paul Hastings accounted for a large portion of the hiring, as it brought on more than 40 lawyers from Stroock & Stroock & Lavan.

Some of these firms are adding restructuring lawyers who handle creditor work as a hedge against a slumping economy.

But at least one, Sidley Austin, is taking on the toughest task in Big Law’s bankruptcy business. It’s hiring to represent large companies in bankruptcies—a business that now goes to only a few select rivals.

At least one of those firms represented the most large Chapter 11 filers in 26 of the past 31 years, according to a database compiled by UCLA and law professor Lynn LoPucki.

Kirkland’s practice has been the most ascendant in the past decade, culminating in 2020 when the firm advised on 23 of the 56 largest bankruptcies, the database shows. 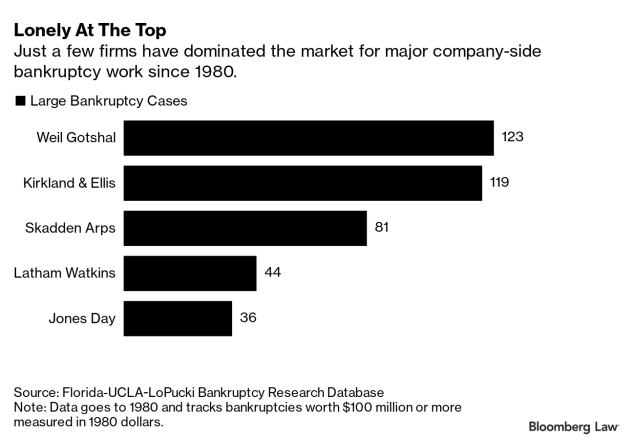 With so few firms controlling the highest end of the practice, is there hope for new rivals to reach the pinnacle of Big Law’s bankruptcy practice?

“It takes a long time but it can be done,” said Sharon Garb, a managing director at recruiting firm Major Lindsey & Africa. “The first step is getting a credible group leader. It’s a risk, but the rest can follow after you have that.”

Sidley Austin is making that push.

Hessler and Sidley chair Yvette Ostolaza said the firm has other hires waiting to be announced as it plots out a strategy to become a go-to firm for large, distressed companies. Sidley already has a restructuring practice consisting of about 50 lawyers.

“It is very much a goal of all of us at Sidley to be among the first choices for a company-side representation,” Hessler said in an interview. “And given our client base, not only on the private equity side but in the public company environment, we think we’re incredibly well-positioned to capture our share of that work.”

So are large teams of litigators, tax lawyers, and strong relationships with board members, often forged through executive compensation practices or shareholder activism defense—a practice Sidley led through the first half of the year.

“They have clearly indicated they want to grow this, and if they can get some of that work, it could be shared,” Garb said. “It depends on how loyal these sponsor clients are to Sidley. That’s going to be the question.”

Other firms have employed Sidley’s strategy of luring a partner from a top restructuring practice in hopes of replicating that firm’s success.

Cravath Swaine & Moore in 2007 made a rare lateral hire by bringing aboard former Skadden partner Richard Levin, who had helped author the 1978 Federal Bankruptcy Code.

Latham & Watkins in 2009 hired Skadden’s Jan Baker, who said at the time that building Latham into a perennial leader in the mold of Weil or Kirkland could take 10 years.

Baker retired in 2017, and a year later the firm brought on former O’Melveny & Myers partner George Davis (who got his start at Weil) to co-lead its bankruptcy practice. In 2019, Latham led LoPucki’s database with four debtor-side representations alongside Weil.

A court filing from that case provides hints as to why the difficult-to-crack practice remains so alluring to managing partners. Basta lists his hourly billing rate at $2,025, among the highest in Big Law. The firm had earned nearly $8.5 million in fees in just over a month’s work on the case.

How successful can they hope to be, given that it takes years to crack the top of the bankruptcy market?

“It’s hard to know if cases will be spread around more than they had been over the last 10 years,” Truster said. It’s also unclear whether “the trend of Kirkland and Weil being primary debtor’s counsel is changing.”

On Sidley: Sidley was also in the news this week after a group of Texas Republican lawmakers threatened to penalize the firm for pledging to pay for out-of-state abortions. The White House slammed the effort as the type of “extreme proposals” President Joe Biden has warned about in the wake of the Supreme Court overturning Roe v. Wade, Meghan Tribe and Courtney Rozen reported.

On Twitter and Elon Musk: Twitter sued Musk over his efforts to scrap a deal to buy the company, with lawyers from Wachtell Lipton Rosen & Katz saying the Delaware Chancery Court case can resolve in only four days, hoping to begin on Sept. 19, Jef Feeley reported for Bloomberg. I reported earlier that the case could lead to legal fees worth tens of millions for the multiple Big Law firms involved.