Welcome back to the Big Law Business column on the changing legal marketplace written by me, Roy Strom. This week, we look at how the richest firms are bulking up their hiring strategies after a record year. Sign up to receive this column in your inbox on Thursday mornings.

It was mid-August when I wrote there would be increased lateral hiring by the richest firms this year. That’s when the wealthiest firms had begun to separate themselves financially from their peers, and the theory was that they would use their outsized profits to invest in talent.

It’s only February, but so far, well, that is exactly what is happening in a surging lateral market.

Through Feb. 16, there have been 209 lateral partner hires made by firms in the AmLaw 100, 15% more than the 182 this group hired in the same period last year, according to data from Leopard Solutions.

Crucially, though, the richest firms have seen the biggest surge in activity.

The top 10 firms ranked by profits per equity partner in the American Lawyer’s latest available rankings made 15 hires through mid-February this year compared to just four during the early weeks of 2020. The top 50 firms by PPP have hired 67 partners so far this year, compared to 36 during the same period last year. 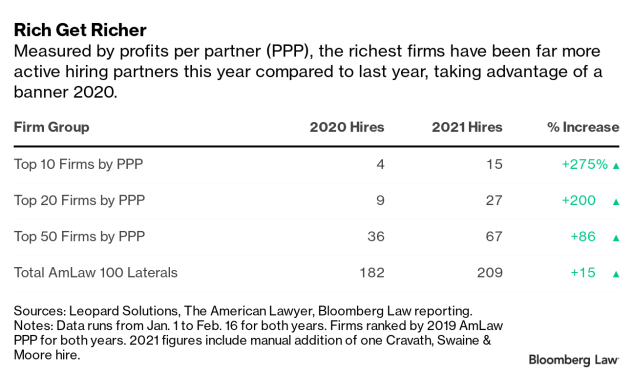 There are a number of firms that have been active in the lateral partner market so far in 2021 that made no hires at all during the same period last year, according to Leopard Solutions data. These include Paul, Weiss, Rifkind, Wharton & Garrison, Sullivan & Cromwell, Davis Polk & Wardwell, Cravath, Swaine & Moore, Skadden, Arps, Slate, Meagher & Flom, Paul Hastings, and Willkie Farr & Gallagher.

To repeat: Even Cravath is in the action! Davis Polk, another firm that has historically resisted lateral hiring, said last year it was making changes to its lockstep model to better compete for talent.

The least profitable firm in that newly acquisitive group, Willkie, had partners earn, on average, more than $3.1 million in 2019, according to AmLaw data. Not to scoff, quite the opposite: When these firms decide to spend money on talent, it’s nearly impossible for other firms to compete.

“You’ve always had firms that are bold like Quinn Emanuel and Kirkland with strong profitability who are aggressive with their growth strategies,” said Larry Watanabe, a veteran recruiter for Big Law firms based in San Diego. “But now there are elite, New York firms [in the mix] that culturally would very rarely do a lateral deal. So now there is not a lot that is out of the question.”

These top flight firms are coming off what appears to be their best year since the Great Recession, which bolsters their ability to pay top dollar for the best talent. Profits per partner at some firms have grown so much that a couple weeks ago I was giving advice about how to talk about the record level of wealth.

Citi Private Bank’s Law Firm Group said AmLaw 50 firms in its annual survey reported nearly 15% growth in profits per equity partner. Applying that growth rate to the richest firms in the world may actually turn out to be a conservative estimate, but it’s still instructive.

We’re likely to see some eye-watering profitability numbers reported later this year. Assuming 15% PPP growth across the board, there would be eight firms with more than $5 million in PPP—up from just two in 2019.

Kirkland would be less than $30,000 away far from surpassing $6 million in PPP. The firm could crack that new record just one year after reportedly crossing the $5 million threshold for the first time.

At some point, the law of large numbers comes into play. If partners are reluctant to move to a new firm for double their previous salary, that might change when a firm is able to offer three times their past wages.

Joe Macrae, founder and chairman of Big Law recruiting firm Macrae, said it had been a very active start to the year for the elite firms but that likely wouldn’t translate to such a significant increase for the full year. He also noted over the last 18 months a number of leading international and U.S. firms have significantly modified their compensation systems to reflect “the increasingly aggressive war for talent.”

Firms have by now accepted Zoom interviews as replacements for in-person connections, which is providing another unexpected accelerant for the lateral market.

Some elite firms that rarely make lateral hires require partners to meet with upwards of 50 people before signing. The timeline for those meetings has been condensed from weeks to days, Macrae said.

“One hour of Zoom is one hour of Zoom, no matter where the other person is sitting,” she said. “In the past Europeans had to book travel to the U.S. for interviews. So it’s even easier for the long-distance recruitment.”

On More Lateral Hires: Kirkland & Ellis is recruiting lawyers in the energy infrastructure and project finance practice, with the firm poised to announce three more hires in the next month after bringing on board Tatiana Monastyrskaya from Skadden. Winston & Strawn acquired a 15-lawyer firm in Los Angeles and added three former Sidley Austin real estate and workout partners.

On Jones Day: The firm was victim of a data breach at its vendor, Accellion, which led to hackers getting access to confidential client data. Meanwhile, the Cleveland-founded law firm continued to bulk up its Washington office with the hire of former Commodity Futures Trading Commission official Joshua Sterling.

On Silicon Valley: Freshfields Bruckhaus Deringer partner Boris Feldman wrote a column for BLaw this week arguing “Silicon Valley is not on its deathbed,” despite reports to the contrary. It’s a good read.