Multinational companies are grappling with a shifting legal environment. Legal and compliance professionals are juggling increasing demands on matters as disparate as corruption, human rights, and how to access data held in other jurisdictions.

This proliferation of regulatory and reporting requirements is behind a thriving new industry: regtech, or regulatory technology. Companies in heavily regulated industries such as financial services, health care, and life sciences have become early adopters of this technology, which might be considered fintech’s younger sibling.

Costs aren’t expected to decline anytime soon. Another report, by JWG and Marklogic, puts the cost of compliance at 4% of revenue, and estimates costs will increase to 10% of revenue by 2021.

Besides the cost savings, regtech is helping companies speed up the compliance process. Whether it’s about HIPAA, FINRA, or EU regulations around GDPR, the increasing number of issues makes doing business across jurisdictions more complicated.

New technology is changing the way companies approach compliance, as well as shifting the way law firms and compliance departments operate. There’s been a “massive buildup of people, technology, and investment” in compliance and risk management, said Tom Nicolosi, a principal in Deloitte’s risk and financial advisory regulatory and operations practice. 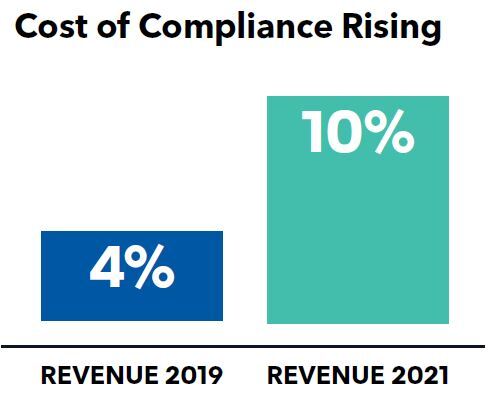 While cost is a leading reason for adopting regtech, greater efficiency is arguably just as important.

“The compliance function was always on the back end,” said Ilieva Ageenko, managing director for financial services at Grant Thornton. In financial services, large banks historically used experienced staff and in-house compliance, but the process is slow, and it’s becoming more challenging to keep up with new technology.

That bottleneck has become an expensive problem at companies dealing with new regulations that require going through a lot of contracts to ensure compliance.

For instance, banks are now dealing with the elimination of LIBOR, which has been used in lending for decades. Roughly $200 trillion worth of financial products are tied to LIBOR. The Securities and Exchange Commission has asked companies to evaluate how the end of LIBOR would affect their business. This means companies need to go through lending agreements from 20 years ago to find out how the agreement was structured and calculate how the new benchmark rate could affect the cost of borrowing.

Similarly, new consumer protection regulations from the Consumer Financial Protection Bureau are forcing banks to go back and review old agreements to ensure the bank is in compliance.

“Lots of these contract reviews were done by people. Now you’re starting to see some experimentation,” Nicolosi said.

Banks and other companies, as well as law firms, are adopting new technology to help with the increased workload, according to Bloomberg Law. As commercial loan or litigation agreements are digitized, regtech providers can use natural language processing to review contracts. Westpac Banking Group in Australia recently engaged law firm Allens to review work done by artificial intelligence compliance software, to test if robots can read laws accurately.

Companies are also adopting regtech to keep on top of new regulations and e-discovery. Where this used to be done by having someone monitor websites, now some tools use machine learning to scrape websites, identify regulatory change, and alert relevant employees.

As technology plays an increasingly important role in compliance and risk management, companies are seeking out different skill sets.

In the past few years, “compliance and risk are building a technology strategy, and that’s not something you’d traditionally see. Skill sets are different now,” Nicolosi said. “There are more employees that have a doctorate in statistics, or they are engineers or process folks.”

But while technology is changing the way legal and compliance professionals work, he said technology isn’t going to replace people.

“Companies will always need lawyers. The jobs may be changing but, at least where we are today, it can’t replace human judgment.”

Recognizing the technology’s importance, companies increasingly are partnering with, investing in, or acquiring regtech providers, which are often startups. Many financial services firms have venture capital investment arms that are focused on technology that the firms might integrate into their operations. Banks are also creating regulatory sandboxes to experiment with new technology in a limited, controlled environment.

“Many of them have less system security,” Ageenko said of the regtech providers. “Sometimes they have a good solution … but they don’t have the maturity for easy integration. Something that I always advise to any financial organization is to do an assessment and identify areas that have good use cases for regtech.”

Ellen Sheng is a writer and editor with a focus on business, finance, fintech, and U.S.-Asia investments.