Despite a slowdown in the first half of the year due to Covid-19, M&A activity bounced back in the latter half of 2020, buoyed by strong performances in the technology and life sciences sectors.

“It definitely was a tale of two halves,” said Luke Bergstrom, global head of M&A at Latham & Watkins.

Global M&A activity reached $3.5 trillion in 2020, a 7.9% decrease from $3.8 trillion in 2019, according to Bloomberg’s end-of-year M&A league table data, a direct result of the decline in deals in the first half the year due to the coronavirus pandemic.

The pandemic accelerated trends in the market, fueling further growth of dealmaking in life sciences andtechnology sectors, that many predict will continue to keep Big Law M&A lawyers busy through 2021 and beyond.

“People aren’t going to go back to buying smoke-stack companies or old economy companies,” said Stuart Cable, global head of M&A at Goodwin Procter. “The action in M&A will continue to be in innovation because that’s where the growth is at all of these companies.”

The pandemic and its effects on the global economy put many companies and their attorneys into wait and see mode early in the year.

“Uncertainty is a killer of deals,” said Sebastian Fain, corporate and M&A partner at Freshfields Bruckhaus Deringer. “And obviously what people were dealing with in March was a great deal of uncertainty I think the likes of which we had not seen at least in our lifetimes.”

M&A activity rebounded in the third quarter, reaching $2.1 trillion, a decrease of 23.6% compared to the same time period last year. Of the five largest deals in 2020, all were announced in the second half of the year.

Leading the league tables in 2020 for overall deal volume was Sullivan & Cromwell, which worked on 150 deals worth $386.1 billion, followed by Latham & Watkins which worked on 557 worth $365.7 billion.

Latham led in deals by volume as principal adviser in 2020, working on 552 worth $358.8 billion. The firm advised on Aon PLC/UK’s purchase of Willis Towers Watson PL, worth a total of $31.4 billion in March, and Slack Technologies, Inc.’s $25.7 billion sale to Salesforce.com Inc., announced in December.

“It just serves to show that being strong in the middle market while also reaching to do some of the most high-profile deals that were done around the globe this year and utilizing a platform that’s global to serve our clients to the best of our abilities has really put us in a great position for the go forward,” he said. 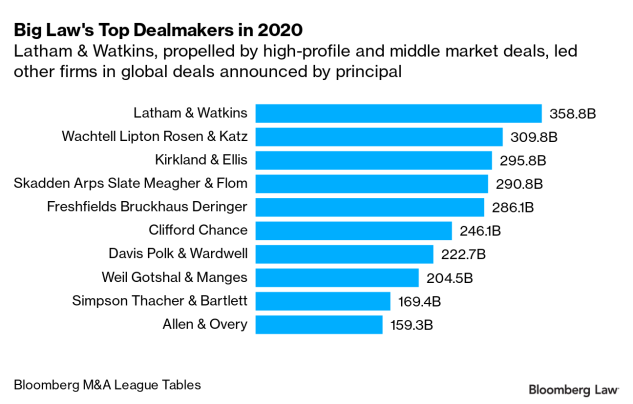 It was a difficult 2020 throughout much of the economy, but a few sectors managed to have a very strong year.

Deals involving a target in tech accounted for $513.5 billion in 2020. The semiconductor space experienced a particular boom, with deals worth $129.4 billion in this area announced in 2020, a 58.6% year on year increase in deal volume, said Grace Maral Burnett, Bloomberg Law legal analyst.

Of the top four law firms by volume in the league tables, all managed to get their hands on at least one big deal in the semiconductor space, Burnett noted, as tech companies look to consolidate in the increasingly competitive industry.

“What the pandemic was doing was accelerating some of these trends we were seeing in the way people work and the way they purchased goods and communicated with each other online,” Bergstrom said. “We had clients that were out there actively looking for buying opportunities in the environment.”

Goodwin, which represented Slack in its sale and Myokardia Inc. in its $13.1 billion sale to Bristol-Myers Squibb, benefited from investment by large companies in the technology and the life sciences sectors.

Big pharmaceutical companies are increasingly looking at the bio tech sector to provide them with the next generation of products and are willing to spend money, Cable said.

“All of these companies are buying innovation, they bought it last year, they’ll buy it in 2021 and that is not going to change,” Cable said.

Bergstrom said in the new year he expects a ton of activity in both strategic M&A and private equity, which also picked up in the fall of 2020. SPACs or “blank check companies,” which raised a record $70 billion last year, are projected to remain strong into 2021.

He also said that as the government fiscal stimulus wears off and workers return to offices, companies may re-evaluate their product and services portfolios, which could generate deals.

“That strategic analysis is likely going to result in a number of carve out opportunities as noncore businesses are shed as companies determine what is a noncore business in this new environment,” Bergstrom said.

Eyes are on Washington as well, to see what impact the Biden administration will have on deal activity, particularly in the areas of antitrust security and foreign investment into the U.S. and in CFIUS, which could keep M&A lawyers quite busy in 2021.

“It’s a great time to be an M&A lawyer,” said Ethan Klingsberg, the head of M&A at Freshfields.