Holland & Knight is a major law firm with roots in Florida and Texas, a small army of lobbyists, attorneys who have run for public office and a political action committee that spends nearly half-a-million dollars per election cycle.

When it comes to taking a stance on abortion rights and other social issues, the firm’s leader wants it to be apolitical.

“We try and stay basically out of the politics and really focus on our job as lawyers and representing clients,” Steven Sonberg, Holland & Knight’s managing partner since 2008, said in a wide-ranging interview. “It’s more challenging today than it was maybe 10 years ago.”

The 1,700-lawyer firm has joined many of its competitors in remaining quiet on the US Supreme Court’s June decision to scrap federal abortion rights and the strict new bans on reproductive health services in Holland & Knight’s own backyards. Sonberg and other firm leaders acknowledged that the firm will field questions about that stance when recruiters hit law school campuses in the fall.

“We have to think more broadly about not only how it is affecting partners and associates in Miami and Dallas, but how it is affecting people in a number of different jurisdictions where the attitudes and views are very different,” he said. “It makes it a little bit more challenging and a little bit harder to say, ‘OK, this is the position we want to take’ on any particular issue.”

For now, the firm has formed a committee to consider how it will navigate the abortion debate. That includes whether to cover costs for employees to travel out of state for abortions, a pledge that has already put a target on the back of one of its competitors.

“We are being very cautious and deliberate,” said Kelly-Ann Cartwright, the firm’s directors committee chair. “At the end of the day, we’re going to make the best decision for us as a firm. Part of making that best decision is analyzing what the legal landscape is and what the firm can and cannot do given that legal landscape.”

Law firms have traditionally looked to avoid weighing in on hot-button social and political issues, unless it is on behalf of a client. They often cite lawyers’ roles as independent arbiters, as well as the cross-section of views held by their employees and clients.

Holland & Knight, the product of a 2021 merger between Florida’s Holland & Knight and Texas-founded Thompson & Knight, may have a hard time staying on the sidelines. The firm faces growing competition for clients and talent in its home states.

The Holland-Thompson tie-up launched the combined firm into the 30 largest in the country. It also gave Holland & Knight strongholds in two of the hottest US legal markers.

Mark Sloan, Thompson’s former chair, said the firm went looking for a merger partner and initiated the talks with Holland & Knight. Now vice chair of the firm’s practice and operations committee, Sloan said the move was a response to the influx of Big Law firms that have moved into the Lone Star State in recent years.

For Sonberg, the merger gave the firm the chance to immediately expand in Texas, a state he noted had his attention given the recent mass of businesses moving there. It also matched Thompson & Knight’s strengths in oil and gas with Holland & Knight’s in renewables, he said, while boosting private equity, real estate and litigation practices.

The combined firm brought in $1.4 billion in gross revenue in 2021, according to data compiled by the American Lawyer. 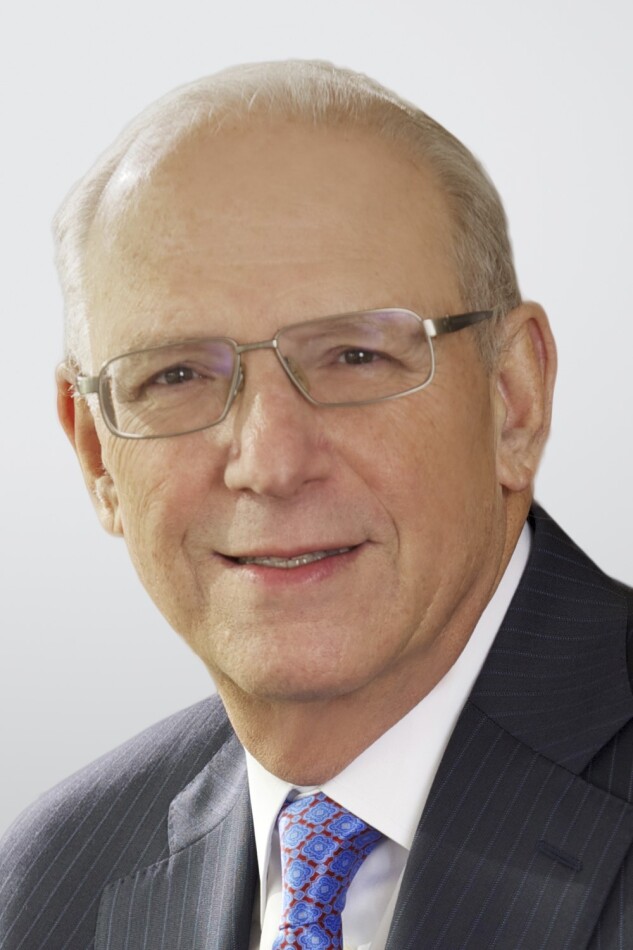 The expanded Holland & Knight’s largest footprint remains in Florida, a state that has seen a Texas-style surge in Big Law arrivals in the year since the merger. Kirkland & Ellis, Sidley Austin and Winston & Strawn are among the major firms that have launched in South Florida this year, following a wave of private equity players heading to the region.

Sonberg didn’t appear overly concerned by the increased competition. He said it remains to be seen whether the influx of private equity and related business is enough to feed all the firms coming to town.

“I think Miami is a glittering jewel that sometimes the closer you get the glitter doesn’t always stick,” said Sonberg. “It’s been a wonderful couple of years and we’re certainly bullish on the city and the opportunities, but the reality is it’s still not a major corporate center.”

The firm’s merger came some 11 months before the Supreme Court scrapped the constitutional right to an abortion with its ruling in Dobbs v. Jackson Women’s Health Organization.

Sonberg said the firm, which is now among the biggest in the US in terms of attorney headcount, still has ambitions to get bigger, with a special interest on the business hubs in Miami, Texas and Mexico.

He emphasized the firm’s wide domestic footprint, saying it makes it more challenging when reaching decisions on how to deal with clients and “the social issues of the day.”

Still, the firm has made being a well-known player in statehouses and Washington a lucrative focus. Holland & Knight brought in nearly $21 million in federal lobbying fees in the first half of this year.

In 2020, an aide to Florida Gov. Ron DeSantis reportedly instructed a Holland & Knight attorney not to file a public records lawsuit on behalf of the Miami Herald. A former managing partner also in 2002 ran for governor in the state as a Democrat, in a move that reportedly opened up the firm to partisan attacks during the campaign.

The firm’s federal PAC shelled out more than $400,000 in spending during the last three election cycles. It paused contributions immediately following the Jan. 6 US Capitol, but soon turned the flow of cash back on, including giving to some Republicans who voted against certifying the 2020 election.

The PAC’s donations have split fairly evenly in the last four election cycles, according to data from the Center for Responsive Politics. 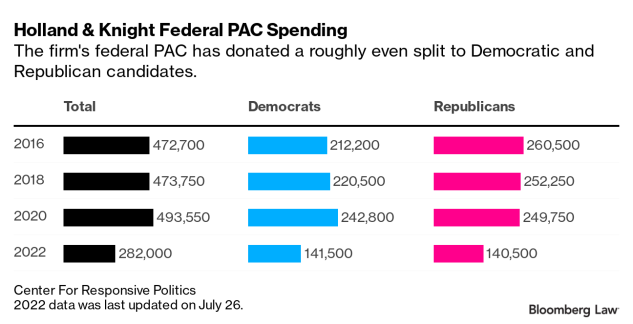 Sonberg said the PAC operates independently of the firm, pointing out that he doesn’t sit on its board.

The committee gave the most money to federal candidates among law firm PACs in the last two election cycles. That shows how important partners believe it is to support certain candidates, according to Sonberg.

“Many partners see it as a value proposition for the firm,” he said.