Ken Cuccinelli, who did the No. 2 job at the Homeland Security Department under President Donald Trump, was looking at a corporate opportunity after he left the administration when the work was suddenly pulled.

“They just decided they didn’t want Trump people,” said Cuccinelli, who declined to name the company. “It was just flat out—you can call it Trump discrimination.”

The revolving door is as much of a Washington tradition as National Mall fireworks on the Fourth of July—people hold prominent government positions and then step into lucrative and often prestigious outside roles. More than 80% of top lawyers in Trump’s administration have landed somewhere since he left office, even if their roles are part time or not their first choice, according to an analysis by Bloomberg Law. (See complete list.)

But the Trump lawyers have been more difficult to place than those who served in previous administrations, particularly if they were closely connected to his most controversial policies or if they lacked the experience past alumni had, said Lauren Drake, a partner at search firm Macrae.

Several companies and law firms distanced themselves from Trump after the Jan. 6 riot at the U.S. Capitol. Corporate law firm Crowell & Moring called for Trump’s removal from office and urged other large firms to make the same demand. Law firms Morgan, Lewis & Bockius and Seyfarth Shaw dropped Trump and his businesses as clients.

“I don’t think anyone coming out of the George W. Bush administration was told, ‘We can’t hire this person,’” Cuccinelli said. “I’m sure Jan. 6 made it that much worse than it ever would have been.”

Attorney General William Barr, Jeffrey Rosen—who ran the Justice Department in an acting capacity after Barr left—U.S. Trade Representative Robert Lighthizer, and White House counsel Pat Cipollone are among those who have yet to resurface with full-time jobs. Barr will decide on his next career steps after he finishes writing a book, Bloomberg Law reported, citing a person familiar with the matter. It’s not clear whether Rosen, Lighthizer or Cipollone are actively seeking jobs.

It’s not uncommon for some government officials to be jobless six months into the next administration, whether that is because they can’t land a position, are not actively looking or have retired. 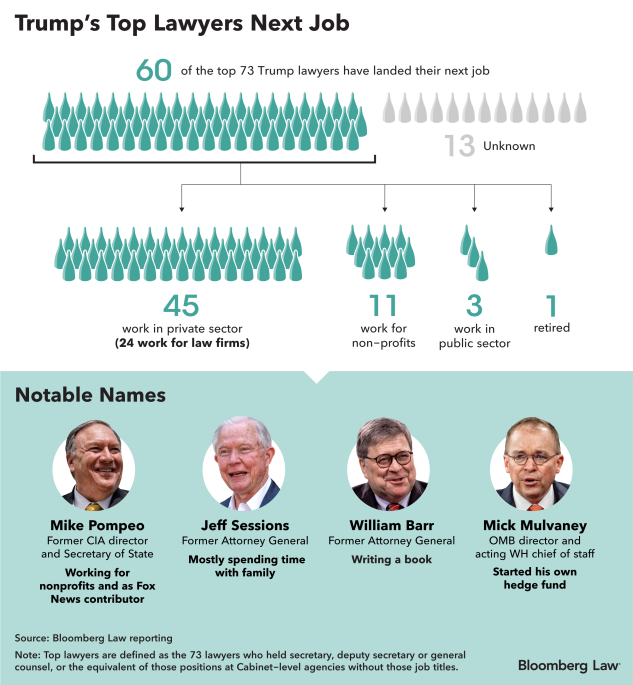 Mike Pompeo, Jeff Sessions, William Barr and Mick Mulvaney are among the lawyers in top Trump administration jobs who are now doing things other than lawyering.

“When many of these people came to Washington it was with Trump’s intention to drain the swamp and bring in Washington outsiders,” Lowe said. “It really shouldn’t be surprising that many of them might not translate well into the typical Washington position.”

Bloomberg Law analyzed what’s happened with 73 lawyers who filled the secretary, deputy secretary or general counsel roles at Cabinet-level agencies at any point during the Trump administration—or the equivalent of those three positions in agencies that don’t use those job titles. The analysis excluded holdovers from the Obama administration.

Others have only part-time roles at think tanks and companies. Those could be overtaken when and if they find something better.

“Most of the people I know who were lawyers, they’re working, they’re doing something—it may not be what they want to do,” said Thomas Bowman, former deputy secretary at the Department of Veterans Affairs under Trump who is now a consultant on veterans and military issues.

Reed D. Rubinstein, who had acting general counsel authority under Trump at the Education Department, blames the barriers on “the extent to which Big Law has been captured by the political left.” He’s now senior litigation counsel with the New Civil Liberties Alliance, a non-profit that targets government administrative actions the group considers unconstitutional.

“To protect the middle and working class, we directly challenged the control, legitimacy, and power of the credentialed managerial class and their corporate institutions,” Rubinstein said. “So it’s not a surprise to me that they are hostile to Trump administration alumni.”

Dan Coats, the former director of national intelligence under Trump, is among three top Cabinet-level Trump lawyers who joined King & Spalding—the second most of any firm behind Jones Day, who hired four.

“Our firm is open to hire on merit basis, not just on political,” said Coats, who also had a previous stint at King & Spalding before returning to the Senate. “If you’ve had a successful career, we’ll take a good look at you.”

The others who joined King & Spalding are Rod Rosenstein, the former deputy attorney general, and Stephen Vaughn, who returned to the firm after a stint as acting U.S. trade representative and general counsel.

None of the three lawyers who were at Kirkland & Ellis before joining the administration—Barr, Rosen, and Labor Solicitor Kate O’Scannlain—have returned to the firm. Jones Day, the firm most closely tied to the administration, has seen White House counsel Don McGahn and Solicitor Noel Francisco return to the firm along with new additions O’Scannlain and Homeland Security lawyer Chad Mizelle.

Representatives for Kirkland and Jones Day declined to comment.

Mark Paoletta, who worked at DLA Piper before working at Office of Management and Budget under Trump, said he decided not to return to Big Law because he wanted flexibility in his work life. He said he also likes that his new employer, boutique firm Schaerr Jaffe, works on policies Big Law firms wouldn’t touch, such as defending gun-owner rights.

“You’re starting to see lots of people land,” Paoletta said of Trump administration alumni. “There will be exciting and meaningful opportunities for lawyers who have something to bring to the table. That’s always the way it has been.”

Top appointees like Barr “will have no problem getting a job if they want one,” Rubinstein said. “Lower level political appointees, especially those in more generic positions, may have a harder time. But that is pretty normative.” 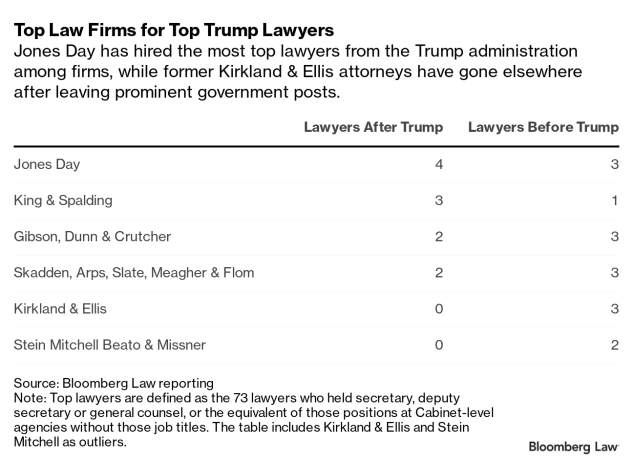 Those who opted for non-profit work include Russell Vought, the former OMB director who is now president of the Center for Renewing America, and Alex Azar, the former Health and Human Services secretary, who is ex officio for an Aspen Institute initiative.

Cuccinelli said that when his corporate role fell through, he knew there would be other opportunities. He’s now national chairman of the Election Transparency Initiative, which is fighting the U.S. election overhaul bill (H.R. 1), and he consults independently on communications and management.

Trump administration lawyers seeking work should “keep plugging away” and trust that their government experience will help them, he said.

“There is plenty of work out there,” Cuccinelli said. “There’s a lot of amazing and unique experience lawyers get in government. There’s things you just don’t get to do anywhere else.”