Simpson Thacher & Bartlett strengthened its position as Big Law’s top mergers and acquisitions adviser, even as deals activity returned to pre-pandemic levels in the first half of 2022.

Global deals totaled $2.1 trillion through June. That’s down 17% from the same time in 2021, when M&A activity soared to record highs.

Simpson Thacher expanded its work by more than 40%, despite the overall slowdown, advising on 103 deals worth $360 billion in the first six months. The firm nearly doubled its closest competitor, perennial dealmaker Wachtell Lipton Rosen & Katz, which advised on $185 billion in transactions.

Choppy equity and financing markets coupled with the regulatory climate in Washington and the war in Ukraine have dampened what was a red-hot M&A market, said Eric Swedenburg, co-head of Simpson Thacher’s M&A practice.

“There’s still deal activity going on,” Swedenburg said. “But it’s just not quite as robust as it was this time last year and that’s probably not too surprising, at least when we look at all the headwinds that are cutting against the deal market.”

The Wall Street firm advised on many of the largest deals of the first half, including VMware Inc.’s $70.4 billion acquisition of Broadcom Inc., Microsoft Corp.’s $68.7 billion acquisition of Activision Blizzard Inc., and the Benetton family and Blackstone Inc.’s takeover bid for Italian infrastructure giant Atlantia SpA, which could become the biggest deal of the year.

Simpson Thacher topped the Bloomberg league tables in total deal volume by principal for the second straight quarter. Over the same time period last year, the firm advised on 117 deals worth $257 billion.

Wachtell advised on 42 deals worth $185 billion in the first half of 2022, down more than 28% in deal value from the same time last year.
Skadden Arps Slate Meagher & Flom, Kirkland & Ellis, and Latham & Watkins rounded out the top five in deals by principal.

“The first half of 2022 is really a story about the resilience of the M&A markets,” said Skadden M&A partner Jeremy London.

Kirkland & Ellis, which advised on 403 deals worth $157 billion, led the league tables in global deals announced by principal by deal count. Latham, Goodwin Procter, Cooley and Sidley Austin rounded out the top five by deal count by principal. 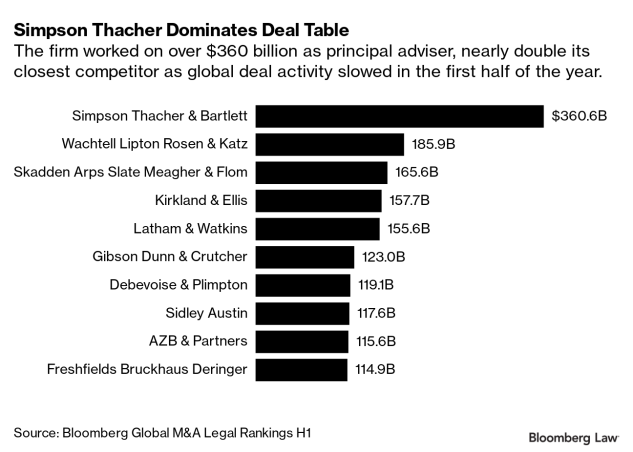 After a booming M&A market in 2021, transactions slowed at the beginning of the year as the market braced for the impact of inflation, rising interest rates, regulatory changes, and Russia’s invasion of Ukraine.

“The macro environment and the geopolitical situation has gotten only worse since the beginning of 2022 and that has led to a trail off in deal activity and that trail off has only increased as 2022 has progressed,” said John Amorosi, M&A partner and co-head of Davis Polk & Wardwell’s private equity practice.

It’s a sharp change from last year, in which board room confidence, stable equity markets, and inexpensive financing primed the market for deals.

“Parties are more cautious, given all these headwinds, deals have longer approval timelines, and a greater level of diligence is common,” Skadden’s London said. “So, while you see fewer announced deals, and maybe substantially so, I don’t think that tells nearly the whole story as to the level of activity,” he said.

Regulatory scrutiny is a growing hurdle for dealmakers. Many Big Law firms have sought to bulk up their regulatory benches, bringing on former government officials and poaching partners from rivals in response to moves from the Biden administration.

“There are lots of deals that people would like to do that people are not even going to try to do anymore because they know that the current regulatory environment is so hostile to any meaningful competitive overlap,” Davis Polk’s Amorosi said.

Private equity deals continued to be a significant source of business for the top performing firms.

Simpson Thacher and Kirkland saw more than 60% of their M&A work come from private equity transactions in the first half of the year. 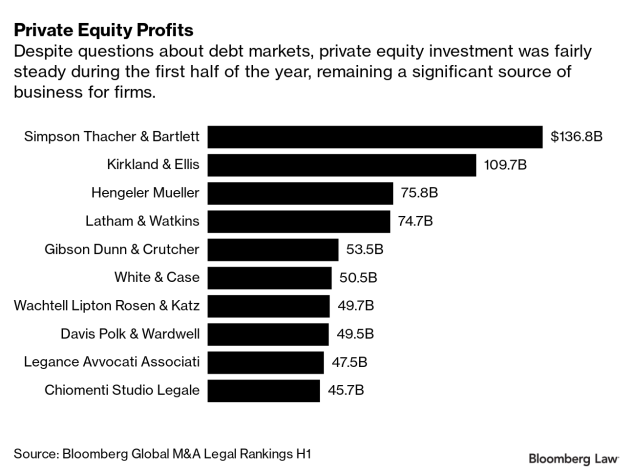 “It’s a difference in scope rather than in kind, in terms of the types of deals and how they’re getting done,” he said.

If M&A activity continues to slow, there are lingering concerns if private equity will continue to be a driver of investment. The debt markets may not cooperate with the sponsors desire to put capital to work, and we’ll see if they do, Amorosi said.

“That’s the biggest question mark because valuations might suggest that sponsors are going to see some opportunities out there. But the real question is, can they find sources of debt capital at sufficiently attractive rates that will enable deal doing, and we don’t know the answer to that yet,” he said.

Clients will likely take their time to see how all of the market pressures play out in coming weeks and months, similar to when the pandemic started, according to the M&A lawyers.

“Measured and incrementally more cautious, but nothing dramatic in terms of changes and how folks are behaving,” Schaye said.