Dealmakers are not sure whether M&A activity will break records for the third-straight year.
Chris Goodney/Bloomberg News

Simpson Thacher & Bartlett was Big Law’s top mergers and acquisitions adviser in the first quarter, as transactions slowed and dealmakers braced for the impact of regulatory changes, inflation and war in Ukraine.

Deal activity kept a healthy pace early in the first three months of 2022, but a myriad of factors left equity markets in flux and deals lawyers cautious about the rest of the year.

“Q1 2022 really started off very strong, seeing continued interest from 2021, but I think there are some headwinds which might slow this down, chief among them rising interest rates and fairly aggressive regulatory posture, especially in the tech industry,” said Sonia Nijjar, a California-based M&A partner at Skadden Arps Slate Meagher & Flom.

“We are gratified that our clients continue to turn to us for their largest, most complex transactions,” said Eric Swedenburg, co-head of the firm’s M&A practice. 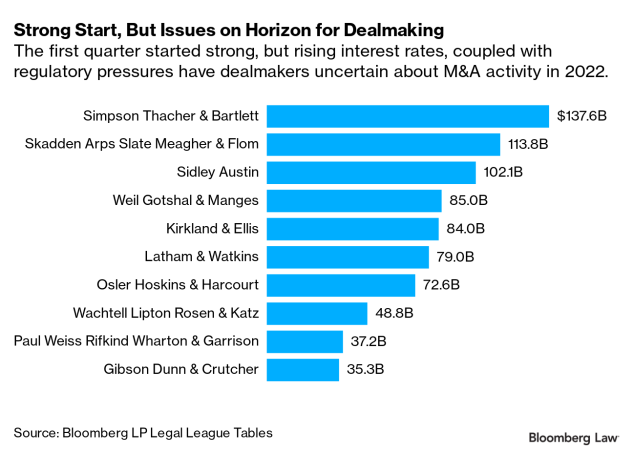 Skadden, which advised Activision in the sale to Microsoft, came in second, advising on 46 deals worth $113.8 billion. Chicago-founded Sidley Austin landed the third spot, working on 109 deals as principal worth $102.1 billion.

Sidley had its best quarter in terms of deals value in nearly four years, according to Bloomberg data. The firm has built out its private equity practice through key lateral hires over the last few years.

“We already had a very strong strategic representation in the M&A space, but that’s sort of episodic, you’re at the mercy of your clients’ doing deals from time to time,” said Dan Clivner, global co-leader of Sidley’s M&A and private equity group.

“What we’ve added is a more robust, connected private equity offering where we have now strong relationships with serial buyers and sellers of assets, private equity sponsors, and really name-brand, marquee relationships that we are benefiting from as they continue to transact now,” he said.

Weil Gotshal & Manges and Kirkland & Ellis, which finished atop the league tables in 2021 with more than $443 billion worth of M&A transactions, rounded out the top five deals firms .

All five law firms that worked on the Microsoft-Activision deal—Simpson, Skadden, Sidley Austin, Weil Gotshal & Manges, and Canada’s Osler Hoskin & Harcourt—landed in the top 10 of the league tables by volume.

“It just goes to show how in a given quarter the impact that a deal like that can have,” said Grace Maral Burnett, Bloomberg Law legal analyst.

Kirkland topped the league tables by deal count for the first quarter, advising on 216 deals worth $84 billion. Latham & Watkins, Goodwin Procter, Sidley and Jones Day rounded out the top five.

‘A Lot on the Plate’

“The first quarter at large is a little bit softer than it was last year, but that in some ways is kind of expected,” said Swedenburg from Simpson Thacher. “It’s hard to go any faster and have any more activity than last year.”

Some clients are being a bit more cautious after deploying so much capital last year, turning their attention to integration and growing existing portfolio companies, said Katie Sudol, who along with Swedenburg leads Simpson Thacher’s M&A practice. Some sponsors are keeping up the deal activity
through fundraising, continuation or other funds, she said.

“Our same private equity clients that were keeping us super busy all throughout last year are still churning, doing a lot of new deals,” Sudol said.

A number of issues could cause dealmakers to lose their appetite.

“I think parties are being very careful about whether it is feasible to get deals done within commercially reasonable timeframes, especially for deals that will be reviewed by certain antitrust or FDI regulators,” Sudol said.

“So the bottom line is, we continue to be very busy and we expect that there’s going to continue to be significant interest in transactional activity coming off of this banner 2021 year, but I think that these factors are likely to dampen activity a bit this year,” she said.

Each individual hurdle is manageable, Swedenburg said. All of them together “puts a lot on the plate” for dealmakers and their lawyers.

“If the equity market stabilizes and people are comfortable we’re not going to return to some kind of 1970s-level stagflation, for example, then I think deals will start picking up again,” Swedenburg said.