Five years after deciding to build it, Sidley has grown its life sciences practice into a $700 million annual enterprise with more than 200 lawyers. The firm since 2019 brought on 30 lateral partners, two-thirds in the transactional space, as Sidley rode a wave of investment in the sector during the coronavirus pandemic.

The firm wanted to merge what it saw as a strength in life sciences regulatory work with its mergers and acquisitions practice to build something “unique,” said Sharon Flanagan, co-leader of the life sciences practice, in an interview.

“It is the convergence of growth in the sector, and then investments that are getting made—and then our ability to put those two pieces together,” she said.

The firm turned to its own playbook in the life sciences effort, employing the same strategy it used a decade ago to create a $550 million private equity practice through lateral hires.

Sidley had long been a leading firm in life sciences, particularly for high stakes regulatory work and complex board level litigation, said Kent Zimmermann, a consultant with the Zeughauser Group, who has advised Sidley.

The firm used “the halo effect”—its reputation for excellence in one area to influence the views of other practices—to build the transactional side of its life sciences practice, Zimmermann said.

Sidley is being “clever” by focusing on all aspects of life sciences, said Christina Sautter, a professor at Louisiana State University Law School and a former M&A lawyer at Shearman & Sterling.

Traditionally, M&A teams outsource the regulatory functions of deals to other firms. “If you have everything in house, that changes the ballgame and obviously drives way more revenue into the firm,” she said.

The life sciences sector has been, and continues to be, one of the “hot” areas, Sautter said.

Pharmaceutical giants such as Pfizer Inc. have been acquiring smaller companies and making investments to further develop research and development pipelines, while private equity has become more focused on life sciences and health care investments.

Private equity investment in biotechnology has reached nearly $190 billion, with roughly $319 billion in health care products and services since 2019, according to Bloomberg data.

Sidley ranks among the top 20 law firms advising on such deals, according to the data. The firm worked on 103 deals worth $15.7 billion over the last three years. 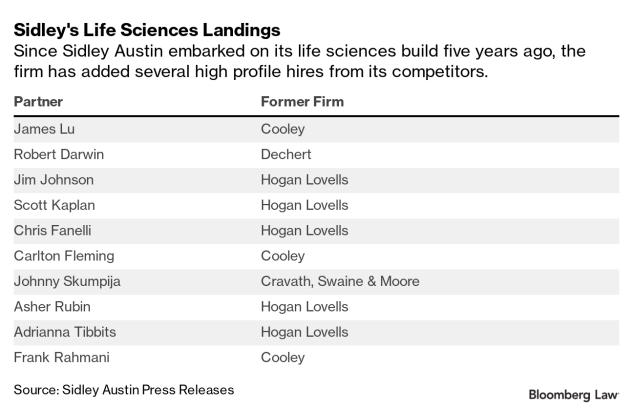 The firm has worked on more than 370 M&A deals worth $77 billion and more than 145 capital markets transactions worth $98 billion in three years in the life sciences space, Sidley said.

The firm last month helped the acne-treating Hero Mighty Patch get acquired by Church & Dwight Co., the owner of the Arm & Hammer and OxiClean brands, for $630 million in cash and restricted stock. The firm also represented the Walgreens Boots Alliance Inc. in its August acquisition of a majority stake in home-health platform CareCentrix for $1.37 billion.

Firms are “aggressively trying to go grow private equity and M&A, especially where it intersects with tech and life sciences, just because there’s been so much and there will be so much” activity, Zimmermann said.

California’s Cooley, Wilson Sonsini Goodrich & Rosati, and Fenwick & West have been mainstays in the life sciences sector, as have Boston-founded Goodwin Procter and Ropes & Gray, and Washington’s Covington & Burling. But, like its private equity build out, the historical strength of some rival firms in the sector hasn’t hindered Sidley’s ambitions.

“We continue to see partners at other firms who are trying to follow their clients and recognizing that their clients are looking for a place where the client won’t outgrow the firm,” Flanagan said.

Sidley has made lateral hires to build on its life sciences strategy.

Sidley also snagged Frank Rahmani from Cooley to help bolster its emerging companies capabilities, which up until the beginning of 2022 saw a record number of companies going public in the life sciences space.

“You really work hard to foster emerging companies, getting them funded, getting to this next stage, and then this company, it grows and, invariably, that company is going to have demands,” said Rahmani, whether that’s complex regulatory counseling across multiple continents, litigation, or FTC public company work.

Some firms fall short of having those capabilities by adding just a few people here and there, he said. “You want a firm that has all those pieces,” Rahmani said.

Life sciences and health care was a driver earlier this year to open Sidley’s Miami office, which has grown to more than 30 lawyers and will continue to be a focus of investment, even as the firm invests in other areas, like restructuring, said Yvette Ostolaza, chair of the management committee, who co-leads the firm’s global operations with Michael Schmidtberger, the chair of Sidley’s executive committee.

“We’re only one of a handful of firms that are over $3 billion” in annual revenue, Ostolaza said. “As you can imagine, having that kind of revenue allows you not to have a zero-sum game.”