Already a progressive hero for a landmark Supreme Court victory for same-sex couples, New York lawyer only cemented that reputation in recent years with lawsuits against White supremacists and .

And, unlike most lawyers pursuing public-interest cases, she has been able to count on work for corporate clients like and to help foot her fledgling law firm’s bills.

’s unusual practice mix has proven a magnet to idealistic young lawyers who want to make money while still being part of the resistance. But the firm, which has already grown to 50 lawyers, may struggle to maintain that balance as Wall Street banks and other big companies continue to call.

“They’ll have to resist the prospect of enormous wealth in order to make sure they have enough time for public-interest cases,” said , a legal ethics professor at New York University School of Law.

The firm has twice outgrown its office space in the Empire State Building and is now moving to and renovating the entire 63rd floor. Kaplan’s corner office eight floors up is full of art, books, legal memorabilia and photos of her and her wife, Democratic operative Rachel Lavine, with , and , among others.

Kaplan, who worked on Hillary’s campaign, said she’d hoped to serve in a senior Justice Department role under the first woman president and had even started looking at schools in Washington for her son. When Trump took the White House, Kaplan, 54, turned to another dream she’d long had — starting her own law firm with a strong emphasis on public-interest work.

“Hillary’s loss obviously changed the timing of all that pretty radically for me,” she said. “I thought to myself, ‘Okay, Kaplan, if you’re going to make a move, now is the time do it. You’re not getting any younger.’” 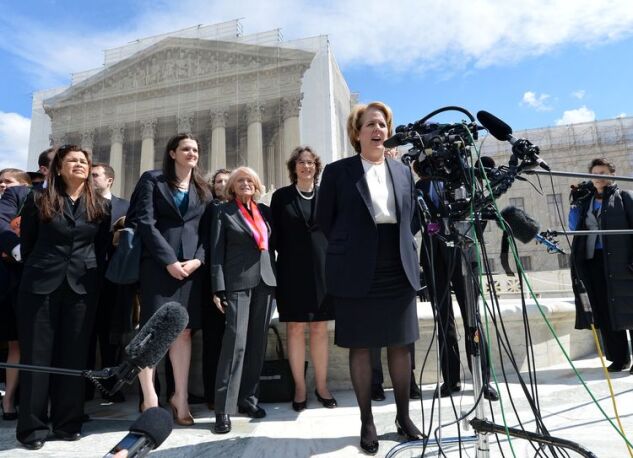 It seemed a natural move for a lawyer who a few years earlier successfully argued for the Supreme Court to overturn the federal Defense of Marriage Act, which defined marriage as between a man and a woman. That 2013 ruling set the stage for the high court to fully legalize same-sex marriage two years later. , the large firm where she worked for 25 years, was supportive of her work but overwhelmingly focused on servicing corporate clients like and .

The firm she co-founded with in 2017 has a “phenomenal” reputation in the marketplace at the moment, with young lawyers drawn to its promise of meaningful work, said former legal recruiter , not to mention an anti-Trump docket that includes a fraud claim by the former president’s niece and a defamation suit by a woman who claims he raped her. Among the sought-after recruits who will join the firm as first-year associates in the fall is Hassaan Shahawy, the outgoing president of the Harvard Law Review.

“Our unique mix of public-interest and private civil and criminal matters is the not-so-secret sauce of our recruiting success,” said Sean Hecker, who joined the firm in 2018. Hecker was early in his career a public defender in New York federal courts and until recently chaired the group that oversees such representations.

That success isn’t limited to law students and associates. Hecker was previously a partner at while Fink, who is leading much of the firm’s expansion as managing partner, is a former senior in-house lawyer at Kaplan Hecker’s other partners joined from firms like Paul Weiss and , and many were former Manhattan federal prosecutors.

Kaplan Hecker landed on its first big public-interest case soon after its founding. The Charlottesville, Virginia, “Unite the Right” rally unfolded on television while the firm’s lawyers were still setting up their new offices. Kaplan said the display of violence and hatred caused one firm employee to run from the room crying.

“I thought ‘someone needs to do something about this,’” she said.

What she did a few months later was sue the rally’s Neo-Nazi and White Supremacist organizers on behalf of nearly a dozen people injured in the ensuing mayhem, using the post-Civil War Ku Klux Klan Act, which was intended to combat intimidation of voters and officials. The suit, which goes to trial in October, is “emblematic of the firm and the unique posture we have,” said Fink, who’s also working on it. 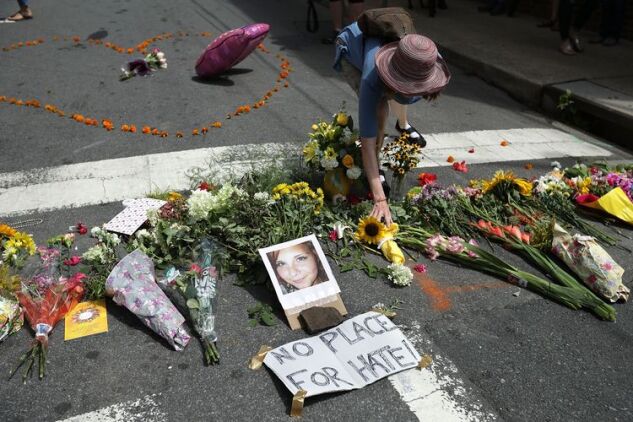 Thirty-two year-old Heather Heyer was killed when a driver plowed into a crowd of people protesting against the white supremacist Unite the Right rally in Charlottesville.
Photographer: Chip Somodevilla/Getty Images

A favorable ruling could expand the ability to sue under the act, turning a little-used provision of the law into a major weapon against political violence. Several Democratic members of Congress recently sued Trump under the Klan Act for allegedly inciting the Capitol riot.

“I hope it will open Americans’ eyes to how dangerous these movements are and how committed they are to destroying our democracy,” Kaplan said of her Charlottesville case. “I hope it’s a wake-up call.”

Kaplan was ahead of the game suing Trump too. She filed three suits against him while he was in office, the first on behalf of “Apprentice” viewers who said they were convinced to invest in a troubled multi-level marketing firm the future president plugged on his show without disclosing he was paid millions to do so. Kaplan is also representing New York advice columnist E. Jean Carroll, who claims Trump defamed her by calling her a liar after she went public with an account of being raped by him two decades ago, and the former president’s own niece Mary, who claims her uncle and his siblings cheated her out of her inheritance.

“She’s brilliant, she’s unrelenting, she can’t be intimidated and she’s not going to back down,” said . “She eats bullies like Donald for lunch.” Kaplan hopes to depose Trump in the Carroll case this year.

Many of the firm’s other senior lawyers have also earned their anti-Trump stripes. , one of the firm’s founding partners, served as counsel to House Democrats in Trump’s second impeachment trial, and John Quinn, another founding partner, filed several briefs in support of U.S. Supreme Court cases challenging Trump administration policies. Susanne Sachsman Grooms, who joined the firm last month after serving as chief counsel for the House Oversight Committee, was on the trial team for both Trump impeachments.

But most of the representations Kaplan Hecker boasts on its website wouldn’t be out of place at Paul Weiss or many other large corporate firms. In addition to Goldman and Uber, Kaplan Hecker clients have included Pfizer, , , , and .

Kaplan says the firm’s public-interest work is a selling point to many in the corporate world.

“Some clients, most notably in tech, like Uber and Airbnb, really appreciate and value the fact that we do this kind of work,” Kaplan said. “It’s important to their employees, so they see that as a positive thing themselves.” 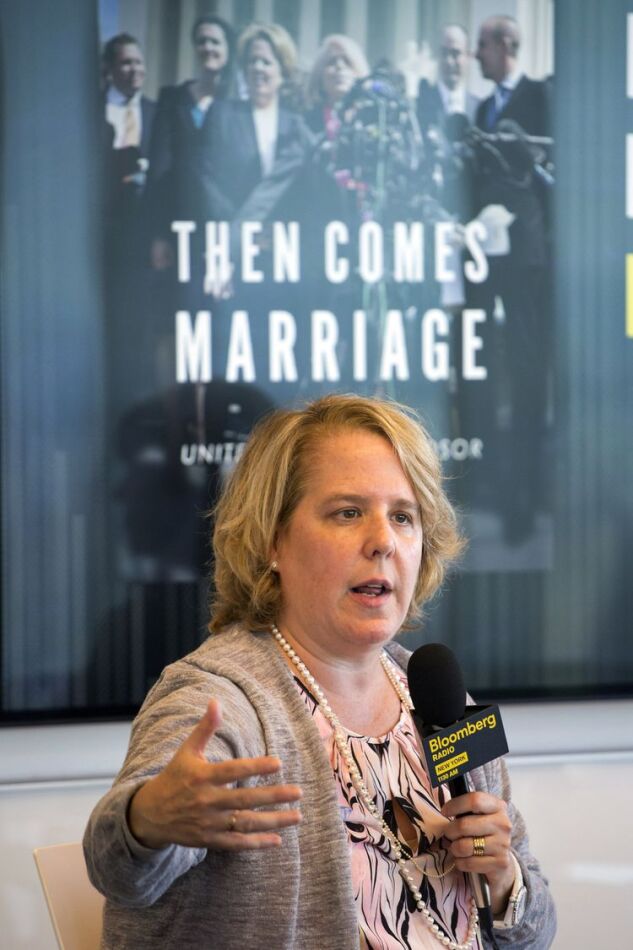 Kaplan says the firm’s public-interest work is a selling point to many in the corporate world.
Photographer: Michael Nagle/Bloomberg

Many large corporations have indeed become more politically vocal in recent years, speaking out in support of same-sex marriage, Black Lives Matter, transgender rights and greater voting access, while also strongly condemning racist remarks by Trump and the Jan. 6 Capitol insurrection carried out by his supporters. Republicans accustomed to the strong support of the business community have begun decrying the rise of “woke capitalism,” but Kaplan celebrates it.

“I certainly get the sense that a lot of our clients — many, if not most — share our concerns about Trump,” she said.

Scott Cummings, a law professor at University of California Los Angeles who focuses on the legal profession, said Kaplan Hecker has appeal to corporations as a law firm with a socially responsible image that’s largely not adverse to them, unlike firms that bring big consumer-protection or environmental class actions.

Some critics go further and say Kaplan is using her anti-Trump cred and progressive reputation to shield wealthy and powerful interests.

She’s defending Goldman in a suit filed by Marla Crawford, a former in-house lawyer at the investment bank who claims she was fired in retaliation for speaking up about instances of sexual harassment of other women by the legal department’s leaders. Goldman has said it reviewed Crawford’s allegations and found them without merit.

At first glance, it seems like the kind of case in which Kaplan, who helped found the Time’s Up Legal Defense Fund, would normally be on the other side. , Crawford’s lawyer, flatly calls Kaplan a hypocrite.

“The question is why someone such as Robbie Kaplan, who holds herself out as a champion of women’s rights, and of the various procedural and substantive rules and laws that support those rights, would take on Goldman as a client,” Wigdor said, adding, “She can’t credibly say Goldman is a great employer and they deserve her representation.” 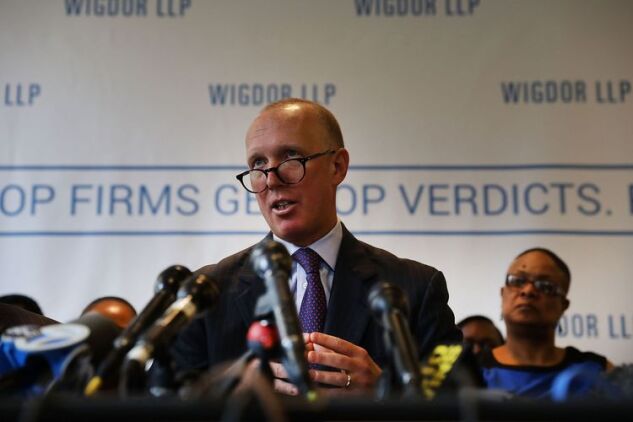 Wigdor notes that creating a firm like Kaplan is building, with partners and associates recruited from bigger firms, requires more money than public-interest work can usually deliver. “Her firm is in its infancy,” he said. “It’s finding its way, it needs to keep the lights on and pay the salaries of its people, and Goldman is the meal ticket.”

Kaplan maintains there’s no compromise. “Unlike Mr. Wigdor, I do not make it a practice of personally attacking other attorneys,” she said. “Every case that Kaplan Hecker takes on is a case that we believe in, and that includes the Goldman case, where we won our motion in the trial court.” The firm succeeded in forcing Crawford’s suit into private arbitration, a tactic many activists say silences victims of harassment. Goldman declined to comment.

Kaplan’s representation of physician Esther Choo, a friend and fellow Time’s Up activist, has also drawn criticism. Though not a defendant, Choo was described in a February sexual harassment suit against a former colleague at Oregon Health and Sciences University as discouraging the victim from coming forward. Kaplan vigorously defended Choo in an interview, saying she relied on the victim’s statement that she would handle the matter herself.

“People will look back and see she’s not advancing the interests of women in the workplace in this case,” said Michael Fuller, the victim’s lawyer. Several other prominent Time’s Up members in the health-care field resigned over the matter, saying the group’s tacit support of Choo was incompatible with its stated goal of combating workplace sexual harassment.

But where some see a hypocrite, others are likely to see a fierce advocate for her clients, corporate or otherwise.

“The consensus in the New York legal community is that she’s a powerhouse,” said Gillers. “She’s a lawyer that you don’t want to see opposing you.”

(Updates with detail on Carroll case and comment on Charlottesville litigation. A previous version of this story corrected Sean Hecker’s involvement with a federal public defender group.)

To contact the editor responsible for this story:
at alin364@bloomberg.net