Welcome back to the Big Law Business column on the changing legal marketplace written by me, Roy Strom. Today, we look at how much law firms are raising rates in 2023. Sign up to receive this column in your Inbox on Thursday mornings.

Some firms are laying off associates. Many are set to pay partners significantly less than they did a year ago. Most expect another year of depressed transactional and capital markets work—a huge driver of profits.

But cheer up, law firm managing partners. It looks like your business is still great at an extremely important thing—raising billing rates.

A handful of Big Law firms and mid-size firms have raised their highest partner billing rates nearly 10% on average this year, a search of bankruptcy dockets shows. And top-paid associates are being billed out at 9% higher than last year’s rates, the search showed.

The data lines up with an earlier report showing that law firms expect to raise rates by 8% this year, the largest figure in 15 years, according to Wells Fargo’s Legal Specialty Group.

At the time of the Wells report, I wrote it was another example of Big Law’s ability to defy basic economics. The number of lawyers at Big Law firms shot up last year, while demand for their time has fallen. And yet, the price for “top legal talent” is on the rise.

Longtime followers of the business of law won’t be surprised the firms are following through with rate hikes. It’s an annual pastime. Law firms, in this respect and others, largely act as one.

The firms don’t readily advertise their billing rates. But bankruptcy courts provide a source of transparency. Firms are required to disclose how much they bill, and they notify courts—and bankruptcy watchdogs at the U.S. Trustees’ offices—when they plan to raise rates.

This year, at least 11 law firms have notified courts they are charging more for their services. 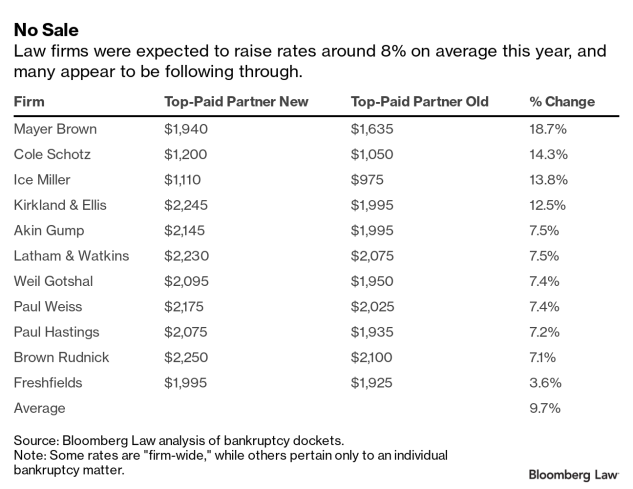 There is some noise in the data.

For instance, some firms appear to present firm-wide billing rates—telling us how much their highest and lowest-paid partners, counsel and associates charge. Other firms report a range that only includes the lawyers they expect to work on an individual Chapter 11 case.

Mayer Brown’s 18.7% rate increase resulted from a new partner being added to the bankruptcy case who did not work on the matter in 2022. The partner billing the $1,940 an hour rate had an increase from last year of 9%, a firm spokeswoman said.

Still, the year-over-year changes are a good look at how much firms are raising rates for similar lawyers. 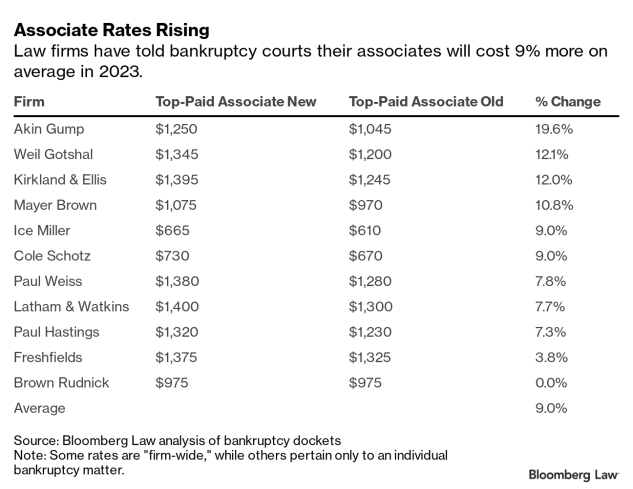 While it was still somewhat rare for firms to report a partner billing $2,000 an hour last year, that threshold seems likely to be broken by most large firms this year. Four of the 11 firms broke that barrier this year—Kirkland & Ellis, Akin Gump, Weil Gotshal, and Paul Hastings. Freshfields was just $5 shy.

Most firms—six of the 11—rose partner rates in the 7% range.

There was less consistency in the hikes for associates—only three of the firms were in the 7% range, and two firms rose rates 9%.

One interesting nugget from the data was that the two smallest firms on the list—Ice Miller and Cole Schotz—had some of the highest percentage increases from last year.

One simple explanation: They have a long way to go before they bump up against the highest end of the market.

And that top end of the market is sure to go higher from here.

On FTX: Removing Sullivan & Cromwell from the FTX bankruptcy would “severely, if not irreparably” harm customers and creditors, the crypto exchange’s CEO John Ray told a judge. Justin Wise reports on the “army” of the firm’s lawyers that have worked around the clock for the past two months—and why they say they have no conflict despite advising the company before its downfall.

On IPOs: It was a dismal year for US initial public offerings, with just $18 billion raised compared to $275 billion in 2021. I wrote about Big Law’s busiest capital markets firms, which suffered a decline of 90% or more in deal value.

On Weil: Weil Gotshal has hired nearly 20 lawyers in Washington since 2021, indicative of a “strategic investment” the firm is making in the nation’s capital, Justin reports.