Welcome back to the Big Law Business column on the changing legal marketplace written by me, Roy Strom. Today, we look at how attrition rates have spiked and the longer-term problem that represents for Big Law. Sign up to receive this column in your inbox on Thursday mornings.

“The crisis is real.”

I did not expect to hear those words when talking about Big Law’s best financial year in over a decade. Billing rates were up, and revenue and profits likely achieved record-setting levels.

Yet the crisis is among the people who bear the brunt of those growing workloads—associates. They’re leaving law firms in record numbers.

“I don’t see this labor crisis, this retention and recruiting crisis, being a short-term thing,” Jim Jones of Georgetown University Law Center’s Program on Trends in Law Practice told me. “This will be with us probably throughout at least 2022 as firms continue to fight to address the rising demand they have.”

Associate turnover rates at AmLaw 100 firms reached nearly 25% last year, up from about 19% in 2019, a Georgetown University and Thomson Reuters Institute report that Jones authored showed.

Those are averages, meaning some law firms suffered even larger attrition woes.

The spike in turnover came despite associate salary and bonus increases of more than 15% at AmLaw 100 firms, the report said.

If that 2021 attrition number repeats this year, law firms will again see a quarter of their associate pool depart.

The implications of such dramatic short-term attrition are one thing. For example, the attrition helped push up recruiting expenses 35% last year.

But taken over a longer period, the attrition is an even scarier proposition. It threatens to upend law firms’ traditional hiring models.

Firms typically assume they will lose 50% of their first-year associate class within five years. Working backwards from there, and projecting their future needs, they figure out how many new lawyers to hire every year.

Those calculations are completely out of touch with a 25% annualized turnover. If that 25% rate holds up over five years, law firms will see their entire first-year class turned over at the end of that period.

“That is a really expensive proposition when these associates are costing you between $250,000 and $300,000 each year,” said Bill Josten, a manager at Thomson Reuters Institute.

Associates have become such a precious commodity that they are starting to drive decisions in the lateral partner market, according to Natasha Innocenti, a San Francisco-based partner at recruiting firm Macrae Legal.

Firms have told her they can’t hire certain partners unless they’re able to bring associates with them to handle the new work they’ll bring over.

“The tail is starting to wag the dog a little bit,” Innocenti said. “Associates are very unhappy. They’re demanding. And they’re in short supply. But they are literally required for profitability.”

Clearly, the primary motivator that law firms have used to keep associates happy—paying them huge raises and bonuses—isn’t doing the job to keep them all in place.

But if more money doesn’t solve the problem, what do law firms need to do to keep associates?

It might be the most important question for law firm leaders right now. But there’s no obvious answer.

One competitive battleground may turn out to be what type of remote work policies firms will allow. That remains to be seen, with in-office work largely optional after the omicron spread. Law firms might not have the leverage to push strict return-to-office rules on associates when the time comes.

The Georgetown/Thomson Reuters Institute report included a comparison of firms that experienced low turnover (on average, less than 9% among all lawyers), and those with high attrition (above 18%).

Its findings were unexpected. The firms with the lowest turnover had associates working longer hours and seeing less compensation growth last year than those with the highest turnover.

The report said the findings indicate “lawyers who are more likely to stay at their current firms are more productive and are not staying because of market-leading pay increases.” 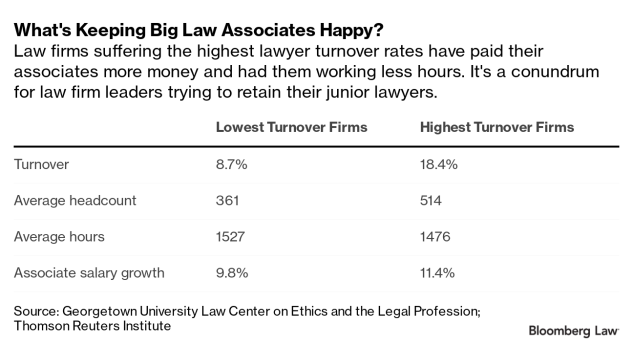 It’s a head-scratching result that seems to only reinforce just how little marginal pay raises can do in the face of broad unhappiness among associates.

“It’s a lot better time to be an observer of law firms than a leader of one,” Jones quipped.

Unless you enjoy the thrill of a crisis.

On Going to Miami: King & Spalding opened a Miami office this week, relocating 12 partners to South Florida as the firm follows an influx of Wall Street types. A local recruiter told me they’re not the only firm looking into a market that has relatively slim numbers of partners carrying large practices.

On Deals: My colleague Ruiqi Chen is all over the results for law firms in a record-setting year for M&A. Kirkland & Ellis topped the overall charts while Freshfields led the way in Europe.

On IPOs: I reported on the biggest winners in a huge year for initial public offerings. Latham & Watkins had a banner year, and a handful of firms made a mint on SPACs despite concerns the market might erode this year. Ruiqi and I spoke about it all for a Bloomberg Law podcast.

On Law School Diversity: Vinson & Elkins is giving $1 million to the University of Texas School of Law to attract more diverse candidates to the legal profession, Ruiqi reported. The funds will pay for outreach targeting Texas high schoolers and prospective law students at universities.

(Adds context from report on why lawyers are more likely to stay at firms. A previous version of this article corrected the characterization of firms with the lowest turnover to state they provided smaller associate salary increases last year.)