Welcome back to the Big Law Business column on the changing legal marketplace written by me, Roy Strom. Today, we look at how a surge in profits is changing the psyche of Big Law partners. Sign up to receive this column in your inbox on Thursday mornings.

Managing partners at Big Law firms often say their job is to grow the profit pool for their partners. On that measure, most have done a fantastic job over the past two years.

Profits at some Big Law firms have risen so much so quickly that some partners are starting to question their futures: How much longer do they need to keep working?

At firms where profits haven’t risen as fast, partners are more tempted than ever to make a move, seeking to cash in on record-setting compensation elsewhere.

“It’s a new phenomenon,” said Suzanne Kane, a San Francisco-based partner at recruiting firm Macrae Inc. “Will we see people opting out earlier? I think we will. They’re saying they will.”

The new calculation is driven by an unexpected, two-year surge in profits. I wrote last week that the average AmLaw 100 partner could earn about $460,000 more in profits over the past two years compared to what they would have earned had longer-term trends in growth continued.

At the highest-performing firms, the numbers are more staggering. I reported earlier this year some partners at Kirkland & Ellis earned $20 million last year. While still rare, the number of eight-figure salaries in Big Law has grown in the past two years, recruiters said. Some partners don’t have to move firms to double their salaries, the recruiters said.

Consider Latham & Watkins, which The American Lawyer reported this week grew profits per equity partner by 26% to $5.7 million last year. That’s on top of 20% profit growth last year. Over the past two years, the average Latham equity partner made $10.2 million in profits, AmLaw data show.

Partners would have made $8.3 million over the past two years had Latham’s profits instead grown at the firm’s more “modest” seven-year average of 6.6%, according to AmLaw data.

The pandemic-fueled spike in legal work and slashed costs led to what could be called a “surplus” in profits at Latham of more than $1.9 million per partner over two years. A similar calculation at Paul Weiss Wharton Rifkind & Garrison shows partners earned about $1.4 million more than long-term growth trends would have projected. Paul Weiss’ profits per equity partner rose to nearly $6.2 million last year, AmLaw reported. 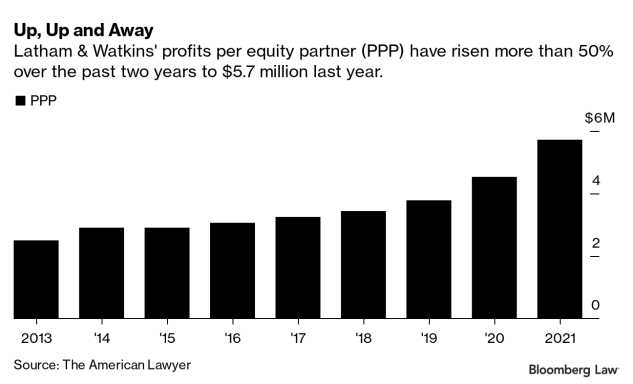 Those firms are unlikely to be outliers.

If profits per partner grew 20% across-the-board last year, there would be nearly 20 law firms where the average partner will have earned an excess $1 million compared to if profits had grown 8% over each of the past two years. There were more than 4,100 equity partners at those firms in 2020, according to AmLaw data. Nine other firms would see partners earn an excess of $750,000 compared to long-term growth trends.

Owen Burman, segment manager for Wells Fargo Private Bank Legal Specialty Group, said he knows one partner who opted out of a Big Law partnership this year, choosing to live off his wife’s salary.

“After a big windfall year, some partners may decide it’s just not worth it,” Burman said. He joked the retirement might only last as long as Tom Brady’s time away from football. “I don’t know if it’ll be a 40-day retirement at that firm. But it’s certainly tempting after a strong year.”

For every partner tempted to walk away, just as many could be motivated to stick around for the chance to build generational wealth.

It’s like a version of Newton’s third law of physics: Every action has an equal and opposite reaction. As money moves towards extremes, so does the decision-making it forces.

Kane, the Macrae recruiter, said she helped a partner in the Bay Area double her compensation with a lateral move in the past two years. The partner had grown up in poverty and the first thing she did with her new compensation was to “trick out” a Mercedes Sprinter van to travel with her family, Kane said.

The move changed her family’s trajectory in generational wealth, the partner told Kane.

David Walden, a New York-based managing director at recruiting firm E.P. Dine Inc., said the surge in profitability has led more partners to check their value in the lateral market. And while those pondering early retirement or trying to build generational wealth remain a small subset of Big Law partners, it’s a growing consideration.

“That was a vocabulary and discussion that existed over the last two decades in conversations with partners, but it was much more unique,” Walden said of early retirement or wealth-building. “Now it is becoming more of a regular part of a Big Law partner’s vocabulary.”

On Litigation Finance: U.S. litigation funding companies committed $2.8 billion to new deals last year, according to a survey of the industry by Westfleet Advisors. It’s an 11% increase from a year ago, and much of it was due to increased interest among AmLaw 200 firms.

(Adds data on nine firms where partners could earn extra $750,000 in 13th paragraph. A previous version of this story was updated to correct the spelling of Suzanne Kane's name throughout.)