A contract with billionaire Peter Thiel’s Palantir Technologies will give the IRS new firepower to pursue tax cheats by connecting the dots in millions of tax filings, bank transactions, phone records, and even social media posts.

The IRS on Sept. 27 signed the deal for $99 million over seven years, according to the contract. It comes at the end of a period when the Internal Revenue Service lost hundreds of special agents to budget cuts while being overwhelmed by data volume that reached the equivalent of 1.5 trillion text files last year, a tenfold increase in a decade.

But while giving the agency more tools to find and prosecute cheats, the scope of the data mining Palintir will be empowered to perform has some tax lawyers fearing they’ll be blindsided as they try to defend clients facing large fines and jail time.

“This puts the IRS in a very strong position. They’re turning over billions of documents and some could interpret it as being Big Brother-ish,” said Josh Ungerman, former IRS senior trial attorney and Department of Justice special assistant U.S. attorney.

Since its 2004 founding, Palantir has provided the government’s go-to software platform Palantir Gotham, locking in more than a half-billion dollars in government contracts and harnessing its data analysis capability for the CIA, the Department of Justice, and the Department of Defense.

If a U.S. taxpayer moves assets from a European bank to the Cayman Islands and then uses various ATMs to withdraw cash to purchase a second home in Florida, Palantir’s software can connect those dots and present a package of information that can be used by the IRS to initiate an investigation.

It could also catch someone who claims a certain deduction in a tax filing and then posts pictures on social media that contradict the information.

Practitioners will need to “challenge their clients to tell them everything or else things can turn ugly,” Ungerman said.

Getting in the Game

Palantir has become more of a government contacting force as Thiel has become an outlier in Silicon Valley for his unabashed support of President Donald Trump.

In 2018, Palantir scored a decade-long $876 million contract with the Department of Defense, beating out seven other companies after initially being effectively locked out of the work. Thiel approved the company’s decision to sue the Army in 2016 over what it said was an unfair bidding process.

The company and tech lobbies siding against the Department of Defense said in court filings that it didn’t make sense for the government to spend considerable time and money on building software infrastructure to support data analysis when there was already a cheaper product on the market that could perform that function.

A federal judge found that the Army failed to adequately consider commercially available options, including Palantir’s, for its internal combat assessment system. The judge barred the Army from awarding a contract and ordered it to restart the process of evaluating technology that already existed. The ruling put Palantir back in the running.

Commercial customers use Palantir’s software to manage supply chains, detect fraud, and ensure compliance with government regulations. Government agencies from the Department of Homeland Security to the Securities and Exchange Commission have applied Palantir software in a similar fashion, using it to track the spread of disease, identify terrorist threats, and track fraud. 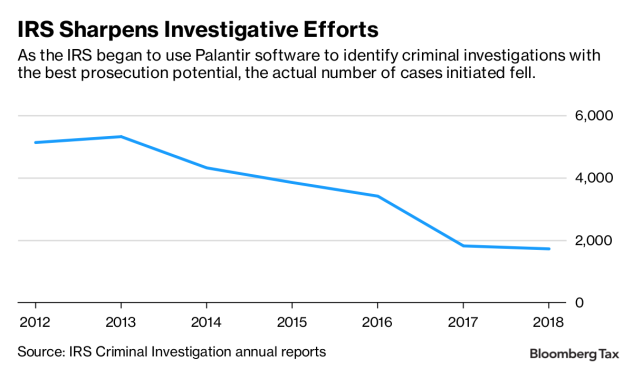 The IRS regularly touts its data-focused approach to criminal investigations and tax audits, vowing to use technology to select the best cases for review. Such precision is increasingly important as the agency grapples with years of budget cuts and employee declines while trying to rein in offshore tax evasion and fraud.

The deal gives the IRS access to Palantir software that will “allow for the rapid ingestion of massive amounts of data,” according to the 2017 contract proposal. That ability is necessary because IRS special agents must be able to review data and “detect connections between data elements,” the proposal said.

“I don’t think you can pick up a newspaper and not see something about data analytics. Everyone is doing it to ingest all the data they have. We’re looking at a myriad of ways to analyze the information and get to the best cases,” Eric Hylton, deputy chief of the Criminal Investigation division at the IRS, told Bloomberg Tax Nov. 9.

The IRS began working with Palantir in 2013. The agency spent $30.8 million on a five-year contract with I3 Federal LLC, a Palantir subsidiary, and granted it access to files for more than 1 million people, according to a privacy audit report.

The I3 Federal contract gave the IRS access to powerful software that was used “to generate leads, identify schemes, uncover tax fraud, and conduct money laundering and forfeiture investigative activities,” according to the audit report.

“When I was there we were getting ready to start looking at using technology in the future. It was all about efficiency. That was the biggest driver,’' said Victor Song, chief of the agency’s Criminal Investigation unit from September 2010 to January 2012.

“When I was there, the budget was going down, resources were starting to go down, and this was the most efficient way to assist us to develop cases.”

While the IRS is filing fewer tax-cheating charges than it once did, it’s using Palantir to identify the cases it has the best chances of winning and that will yield the highest return.

The IRS declined to say why it selected Palantir, and said it spends billions of dollars on non-labor contracts every year.

The IRS committed to pay Palantir $14.4 million in 2018, its 25th-largest IT contract commitment. The agency has already committed $171 million to Accenture PLC in 2018, according to Bloomberg Government.

The Palantir connection could increase the pressure on attorneys representing clients facing IRS audits, Ungerman said. Palantir’s data trove could turn every audit into an “eggshell audit,” requiring attorneys to tread carefully during an investigation to avoid making things worse for the client.

“It becomes more important for the lawyer to understand the background facts before the audit begins because the use of big data will yield information for the IRS that was often absent in past IRS audits,” he said. Ungerman is now a partner with Meadows, Collier, Reed, Cousins, Crouch & Ungerman LLP in Dallas.

In a civil audit, an IRS agent will try to determine if there is a clear indication of fraud. The agent often won’t disclose all information in his or her possession as the case is being built. At that point, the IRS agent will refer the case to its Criminal Investigation unit. Then CI will build a case that proves willful tax evasion—the minimum requirement for criminal tax convictions.

“You can’t buy your way out of criminal. If there is any criminal activity the IRS will seek criminal justice, which means jail time,” said Jeffrey Neiman, a Miami-based tax partner at Marcus, Neiman & Rashbaum LLP and former trial attorney with the Department of Justice criminal and fraud sections.

The IRS’s volume of data in 2017 was 100 times larger than the amount in 2007, according to a strategic plan from the agency. As part of that plan, the IRS vowed to “invest in analytics and visualization software and tools, and develop processes to support analytics in IRS operations.” The plan covers fiscal years 2018 to 2022.

“Basically they would need to hire 100 agents a year just to tread water,” Nanavati said.

The agency said it plans to hire 250 more agents over the next 18 months, plus 10 data specialists.

“The decreased resources have had a huge and negative impact on the IRS and on top of that they’ve been unable to rehire, retrain, or replace their most experienced agents,” Ungerman said.” So now we have this perfect storm where the IRS needs something to carry it into today.”

To contact the reporters on this story: in Washington at sbulusu@bloombergtax.com;