Davis Wright Tremaine, a century-old law firm among the 100 largest in the country, is welcoming a new class of incoming lawyers that includes five attorneys who have no plans to take a bar exam.

Those new associates earned their licenses through “diploma privilege,” an alternative to the biannual tests offered in a handful of states as a one-time-only response to the coronavirus pandemic. Each already had job offers from the firm when they skipped the tests and went through the standard vetting process for candidates, Bahareh Samanian, the firm’s director of lawyer recruiting, told Bloomberg Law.

Their lack of a passing test score is “not a concern” for the firm, she said.

“These associates established their capabilities and we chose them because we are confident they will become excellent, successful lawyers who will fit well in our firm,” Samanian said in a written statement.

More than 1,000 recent law school graduates so far have opted to become licensed to practice without taking a bar exam, through emergency programs enacted in four states and Washington, D.C., state data shows. Indifference to the test from at least some firms like Davis Wright Tremaine, their insurers, and other employers could help the push to make temporary diploma privilege programs permanent.

Advocates say programs in Utah, Washington, Oregon, Louisiana, and Washington, D.C. set an important precedent, even though the programs are designed to phase out in 2021. Only Wisconsin and New Hampshire have permanent diploma privilege programs on the books for graduates from in-state law schools that offer apprenticeship-style education.

Although prosecutor offices in Oregon and Washington have also welcomed new attorneys opting for the diploma privilege route, court officials elsewhere have raised concerns about ensuring that candidates for legal practice are properly vetted. At least one other large law firm has “encouraged” its new associates to take the bar, even if they first opted for privilege, while others declined to comment.

In mid-April, Utah became the first jurisdiction to allow an emergency diploma privilege for law school graduates who met certain requirements, like working under the supervision of a licensed attorney for at least 360 hours.

Some diploma privilege programs require that candidates also fulfill ethics requirements. Combined with supervision obligations, the programs often overlap with the more popular “provisional licensing” systems established in certain states, which grant law school grads the right to practice in limited circumstances, on the condition that they take and pass a bar exam before a set date.

Washington and Oregon followed suit, approving diploma privilege in June. Louisiana joined the trend a month later, with the state’s highest court citing the “unprecedented and extraordinary burden” posed for test takers preparing to sit for the exam in the middle of the pandemic. The D.C. Court of Appeals adopted a privilege program in September.

The number of candidates who opted for diploma privilege ranged from 177 in Utah to 586 in Washington, according to state officials. Including Louisiana, with an estimated 350 privilege candidates—a Supreme Court spokeswoman did not respond to questions—nearly 1,400 people have been awarded diploma privilege in those four states. 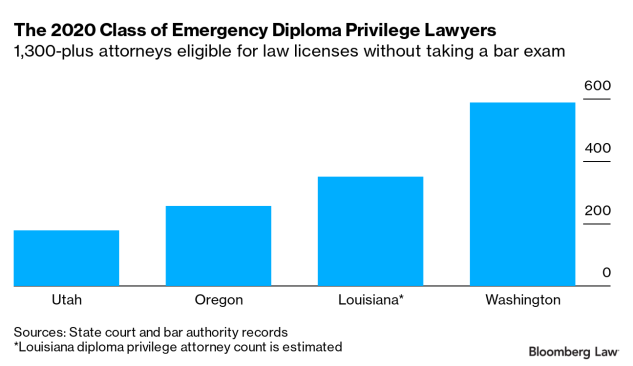 In Washington D.C., it’s too early to know how many people will be seeking diploma privilege, or what’s being called an “emergency examination waiver.” The application period begins Jan. 11.

The programs are not without detractors. In Oregon, Louisiana, and D.C., privilege was approved by courts by slim margins, with each order accompanied by three dissenting votes.

Eliminating the bar is more likely to create an emergency than eliminate one, Louisiana Justice William Crain said in one such dissent. “The bar examination acts to protect the public from basic incompetency,” he wrote.

“This year all our incoming associates opted to take the bar exam. While we didn’t require it for locations that had the diploma privilege, we did encourage it,” she said. “That said, once our first year associates join us, they are evaluated on the quality of their work and their citizenship and other contributions, and the bar exam really is not a factor.”

The privilege programs in each of the five emergency jurisdictions were designed specifically to be a response to Covid-19—and temporary. Each state has already announced plans to hold online bar exams in late February, and none have signaled that they intend to revive the alternative licensing programs this time around.

Hailey Barnett, a 2020 Tulane University Law School graduate and diploma privilege advocate, said the decision to pursue the privilege route was simple for most, if not all of her network of law school acquaintances. “I don’t know of a single person who decided to take the bar exam,” said Barnett, who works as a staff attorney with a legal nonprofit in Louisiana.

“Legal education would be so much better if they didn’t have to teach to the test,” Chang said.

A nationwide cadre of anti-bar exam activists has been forged by the pandemic, some of whom are now behind a new nonprofit group called the National Association for Equity in the Legal Profession. The group will push a range of issues surrounding the bar exam, including diploma privilege—as well as for increased legal profession diversity and law school curricula reform.

“We haven’t had one umbrella organization that is nationally committed to equity” in law, said Pilar Escontrias, also a co-founder of the group United for Diploma Privilege. She recently registered the new association as a 501(c)(4) nonprofit in California, which will allow it to lobby.

Escontrias said she viewed the 2020 fight for diploma privilege as a success, despite the fact that most large states failed to adopt it. The effort spurred many law students, professors, and others around the country to advocate on the issue for the first time.

“We knew California and some other states would be long shots,” she said.