Charles Johnson got his life back when he was released from prison in 2016, after serving 22 years for a crime he didn’t commit. But he was still broke.

“You have to start from scratch,” Johnson said. “From underwear to a bar of soap, you don’t have nothing.”

Johnson did have one item of potential value: A lawsuit.

He sued the City of Chicago and its police department in 2018, alleging that police coerced Johnson and three others into confessing to a double murder. Prosecutors hid crucial fingerprint evidence that years later proved Johnson’s innocence, according to the suit.

Juries in Chicago, dubbed “the wrongful conviction capital of America,” have handed down verdicts as high as $25 million in similar cases.

Plenty of investors are eager for a slice of that money.

The proliferation of litigation funding in the U.S., where financiers bet on lawsuits hoping for juicy returns, has extended to civil rights claims brought by the wrongly convicted. Some funders are willing to provide exonerees as much as $1 million in upfront cash.

Here’s the deal: The exoneree keeps the money even if the case loses. But if it’s a winner, the person can be forced to pay back as much as three times the amount of money fronted.

There are two ways the wrongfully convicted can gain compensation for their time behind bars. Most states have laws providing compensation to those who can verify their innocence. Then there are civil lawsuits, a longer-shot effort to prove the conviction was the result of police misconduct. Money from outside funders often fills a financial gap between the time someone is released and when states pay up—which can take years.

Still, some people who have had convictions overturned—and their lawyers—balk at the interest rates that come with funding deals, which can be similar to those charged companies by investors funding patent or commerical disputes.

“It was more like, whatever the number you did get, you’re paying almost triple that number back,” he said.

He eventually opted to go with Validity Capital, a commercial funder now offering deals at tightly capped rates in wrongful convictions cases as a sort of public service. If his case is successful, he will repay an initial investment of $100,000 plus a flat 8% interest rate.

Other financiers say their rates are commensurate with the all-or-nothing risk they’re taking on, like in any other lawsuit. They say the money they provide is a lifeline for people who are eager to make the most out of the very thing taken from them: time.

“We love to fund these cases,” said Daniel Digiamo, head of finance company Baker Street Capital, where interest rates are capped after two years and plaintiffs receive monthly or semi-annual cash advances. “We believe in the plaintiffs. We believe in the cases. And we believe in what the funding allows them to do.”

Since 1989, nearly 3,000 people have been exonerated in the U.S., according to the National Registry of Exonerations. About half of them are Black, 35% White and 12% Hispanic.

Laws in 36 states and on the federal books provide money to exonerees, according to the exonerations registry. The payments vary but often fall around $50,000 for every year wasted in prison.

Roughly 53% of exonerees in states with such laws have even filed to receive the compensation, according to a 2019 study by Jeffrey Gutman, a law professor at the George Washington University. Of those filers, nearly 75% were successful while about 18% lost their claims. The rest are pending.

One of the most common reasons people don’t file a claim—or lose one—is that, they have to prove their innocence to get compensation, despite already having the conviction overturned, Gutman said.

“There are some situations where the state recognizes, yes, this person requires release,” Gutman said. “And then they might defend against the exonerees’ claim of innocence.”

That’s not the only barrier. Florida disqualifes exonerees with previous felony convictions. Many states also cap payouts and take years to fork over the cash.

Exonerees have not been compensated for nearly half of the years they wrongly spent in prison in states with these laws, Gutman found.

Getting cash from a state is exonerees’ best shot at some compensation, but lawsuits alleging police misconduct offer a potentially much larger pay day.

Those suits generated $1.7 billion in verdicts and settlements over a two-decade period ending in 2019, according to Gutman’s study. That number is now up to $2.4 billion.

More than 160 people were exonerated each year from 2014 to 2021, according to the national registry. 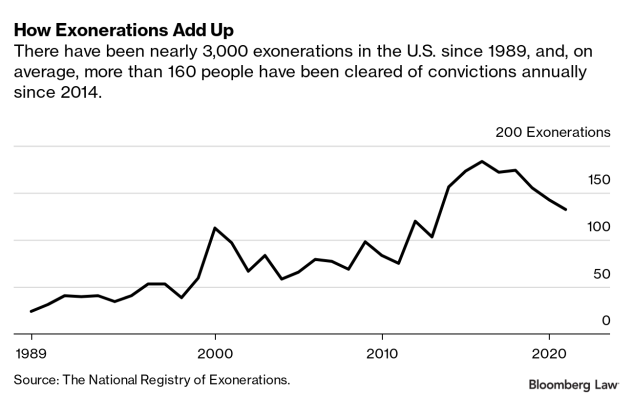 Still, the odds of winning at least some money in these cases is equivalent to a coin flip.

Around 1,200 exonerees have filed civil lawsuits, according to Gutman’s latest research. About 51% of those, roughly 610, received some monetary recovery while 27% were unsuccessful. The remaining suits are still pending.

The average winning suit pays about $320,000 in compensation per year of imprisonment, Gutman said.

Gutman couldn’t answer a hypothetical question: Would he take the litigation funding deal? He noted that interest rates were high but so is the risk of losing. He said people offered these deals should consult independent financial advisors.

“These are the people in our society who should least be in the position of possibly being taken advantage of,” he said.

Fernando Bermudez was released from prison at age 40 in 2009, after serving 18 years for a murder a New York judge said he didn’t commit. He soon took out his first advance against the civil rights lawsuit he eventually filed in 2011, seeking $30 million in damages.

Bermudez eventually received about $215,000 in advances from litigation finance companies he declined to name. He said he ended up paying back more than $400,000.

The cash got the husband and father of three through a time when job opportunities were scarce.

Although he acknowledges the lawsuit loans were his “best option” during a difficult time, Bermudez wasn’t happy about the terms. 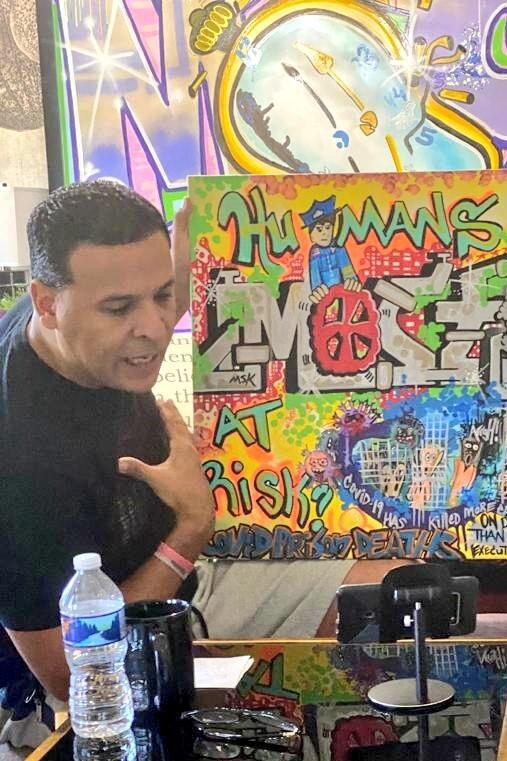 “It is a feature of litigation that it presents delay, stress, challenges, and uncertainty. So therefore these funders have a place in the world,” said Locke Bowman, who runs a wrongful convictions advocacy group at Northwestern Law School.

Jon Loevy, a Chicago trial lawyer, has won multiple cases ranging between $20 million and $25 million. He says he educates clients, which he represents on a contingency fee basis, about the cost of funding deals.

“It’s a business deal,” Loevy said. “But people are wary or skeptical, and properly so, because the balance of power here favors the capitalist.”

New York lawyer Nick Brustin has won at least three civil rights cases paying out more than $16 million. He said two funders—U.S. Claims and Law Finance Group—offer the best rates in the industry, topping out at twice the principal amount after four years.

“I do think it is a necessary evil for a lot of people who’ve been through what our clients have been through,” Brustin said. “I still think the profit margins are out of whack. ”

U.S. Claims and Law Finance Group did not respond to messages seeking comment.

Baker Street’s Digiamo said his company caps interest rates below 100% after two years. He said the lawsuit investing industry has grown “exponentially” in the past few years, accessing less expensive capital from major alternative investors in the process and bringing down the cost of these deals.

“It’s gotten more competitive, too, for the product the end user gets,” he said. “Four years ago you’d see compounding interest with no caps.”

VIDEO:Making Millions Off Others’ Lawsuits: How Litigation Finance Works

Johnson, the Chicago-based exoneree, received $226,000 from Illinois. That’s a little more than $10,000 for each year behind bars.

The money didn’t reach Johnson until more than a year after he was released. Like Bermudez, he had difficulty finding a job while waiting. Even after obtaining a certificate of innocence from the state, employers were skeptical about the 22-year gap in his resume.

Johnson was left to rely financially on friends and family. That didn’t go too far. His mother had filed bankruptcy while fighting for his release. Still, he balked at the traditional financing agreements.

His lawyers at Kirkland & Ellis, who represented Johnson pro bono, reached out to a former colleague at litigation funding firm Validity. The company, backed by TowerBrook Capital Partners, decided to start a program offering $100,000 with a maximum repayment of $108,000—only if Johnson’s case is successful. It’s so far funded three wrongful convictions cases on similar terms, CEO Ralph Sutton said.

“There is clearly no shortage of people who think providing large amounts of money at high returns is a reasonable business model,” Sutton said in an interview. “And that is for the person who has been declared innocent to decide for themselves. But we thought another option was important and a great way to give back.”

(Updated with additional information on the average payments through state exoneration programs.)