A person types on a keyboard.
Photographer: John Taggart/Bloomberg via Getty Images

Hundreds of law school graduates in Michigan will sit for the bar exam on Tuesday, the culmination of years of study and the last major hurdle before they can start careers as attorneys.

First, they have to smile for the camera.

Michigan is among a handful of states conducting online bar exams that use facial recognition software to deter cheating.

That’s raised concerns about discrimination, as similar technology is said to struggle to accurately read the faces of women and people of color. It has also raised questions about privacy, related to how images are stored and used, and accessibility.

“This is detrimental for diversity in the legal profession,” said Pilar Escontrias, a law school grad set to take California’s online bar exam in October. The pandemic has exacerbated the feeling that the bar exam is “more of a test of resources than competence,” she said.

The bar exam is one of many barriers keeping aspiring lawyers from entering the legal field, which is dealing with its own diversity issues.

Test takers’ concerns mirror the more general complaints over Big Tech’s development of facial recognition technology. , , and are under fire for allegedly using biometric data to train the technology, which can be used by law enforcement agencies and others.

Facial recognition technology has a “simple, but vital purpose: to protect the people of Michigan,” said John Nevin, communications director at the state’s Supreme Court, which oversees the bar exam.

“There is no other purpose for use of the technology and any information collected about the participant will be destroyed,” Nevin said.

Test takers won’t be locked out of the exam in suspected cases of misidentification or cheating, said Nici Sandberg, a representative for ExamSoft, which provides the technology. Each state will “make the ultimate determination on any integrity issues,” Sandberg said.

The company “does not believe that our product disproportionately harms individuals of color,” Sandberg said.

Still, the biases built into the software “all but guarantee test takers from marginalized groups will also be disproportionately impacted by erroneous identifications during the exam,” The American Civil Liberties Union said in a recent letter to the California Supreme Court.

Marginalized communities, including people with disabilities, are more likely to experience technical difficulties or be wrongfully accused of cheating, the ACLU said.

A race-based technological disruption can make someone “lose their composure, lose their train of thought, and that’s all it takes to mean the difference between passing and failing,” said Tom McMasters, a patent and data privacy lawyer who plans to take the upcoming California exam. Especially for a test where many students pass by a “razor thin” margin, McMasters said.

Online exams are also susceptible glitches that increase anxiety on test day. Michigan test takers were unable to receive passwords they needed to get into the second module of the test, Nevin said. The glitch was resolved and participants were able to “start testing shortly thereafter,” Nevin said. Test takers will get additional time to finish the exam.

Nearly half of states are conducting the bi-annual bar exam this week. Several have opted in response to the Covid-19 pandemic to move the test online or push it back. 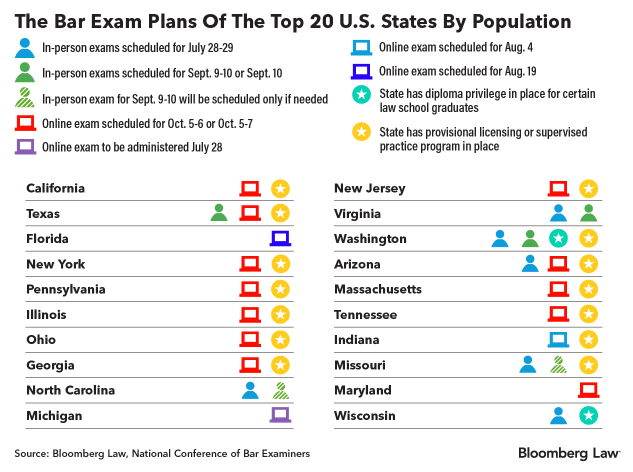 It will already be challenging to score the exam based on any previous metrics, because “no one knows how much more difficult” the pandemic has made the test, said Joan Howarth, an interim associate dean at the University of Nevada’s law school. Child care, economic pressure, isolation and general stress, not to mention library and study space closures, add to the difficulty of preparing for the exam.

A candidate “who still has the ability to practice law is likely to test at a lower level,” Howarth said.

ExamSoft asks test takers to submit a baseline image before exam day, to which they will be compared repeatedly during the test.

“Should the software identify a non-match or anomaly,” Sandberg said “the system will flag it for human review and comparison.”

Remote test takers are bound by codes of conduct, similar to those for those taking the exam in person. They must stay in the frame of the camera during the entire test, and are typically not allowed to have anything but water at their workstations.

Test takers in Tennessee are instructed not to “fidget,” “touch your face or twirl your hair,” or “look up, down or to the side for more than a few seconds.” That behavior “can appear to be cheating,” according to a preliminary instructions list.

Bar applicants are also concerned about giving their biometric data to test-taking software companies. These facial recognition tools will capture “a lot of information inside the home” that could put people’s livelihoods at risk, said Faiza Patel, co-director of the Brennan Center’s Liberty & National Security Program.

An Illinois state law banning the use of biometric data without prior consent reflects many of those concerns and is a model for efforts to establish similar protections elsewhere.

“There are communities susceptible to the violent deployment of their biometric data after the fact,” Escontrias said. States that utilize facial recognition technology in their testing software this year may see lower numbers of undocumented, first generation, and or attorneys of color in the next class of lawyers, Escontrias said.

Many of the other states delivering remote bar exams are contracting with ILG Exam 360. The software doesn’t use facial recognition technology, instead relying on various forms of human proctoring.

That doesn’t protect test takers from technical glitches that could impede their performance. Nevada and Indiana recently postponed their July exams as a result of software issues.

Test takers “don’t want a technical mix-up at the start of the exam that is already stressful enough,” Fazlullah said.

—Dan Stoller contributed to this report.

To contact the reporter on this story: in Washington at areed@bloombergindustry.com

To contact the editors responsible for this story: at copfer@bloomberglaw.com.