The New York bar exam passage rate shot up in the state’s first-ever online version of the test.

A total of 84% of test takers passed the October exam, up from 65% for the in-person test in July, according to a state agency. The overall number of test takers in New York was down by about 50% from the more than 10,000 who sat for the exam in July.

The latest results, and the October test, came amid chaos posed by the coronavirus pandemic.

The pass rate for first-time takers, who were the vast majority of October examinees, was 85%. That’s 9% higher than the 76% of first-time exam takers who passed the test in July of last year.

The New York State Board of Law Examiners didn’t offer explanations as to why the state exam’s pass rates shot up—Ohio and Washington, D.C. have also seen increased pass rates in online tests—or why the overall number of test takers plummeted.

Scott Karson, president of the New York State Bar Association, said it’s difficult to know exactly why the New York bar’s pass rates rose, while those in other states have dropped. He said that comparing the pre-pandemic 2019 test results to those from last October amid the pandemic “is like comparing apples to oranges.”

The starkly lower number of test takers might have an easier explanation, according to Karson. New York’s oft-changed bar exam plans may have caused uncertainty that spurred some to take the exam in a different state with the hopes that passage of the Uniform Bar Exam would help them gain admission into New York, he said. 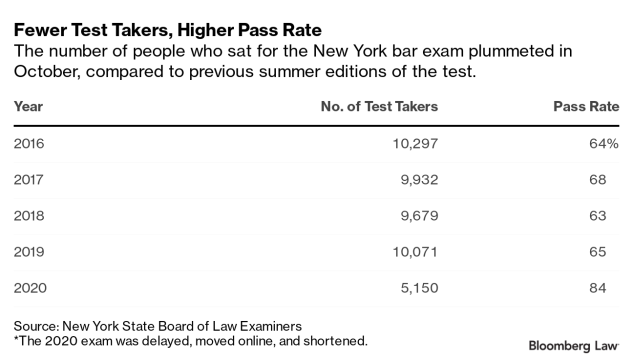 Karson said he expects the New York Board of Law Examiners to study the pass rate and attendance numbers as the agency determines how to proceed in coming years.

Commentators have suggested that bar exam pass rate rises in other states may have had to do with the longer period of time test takers had to prepare for this year’s online exam, as well as the reduced number of questions in the Multistate Bar Exam portion of the test, 100, cut in half from the usual from 200.

“The Board acknowledges that the pandemic added significant challenges for this year’s graduates, including the delayed administration of the July exam, and we are grateful for their patience and cooperation,” its statement said.

A list of those who passed the October bar in New York will be available to the public on the Board’s website on Thursday morning.

Nearly half of states, 23, held in-person bar exams in July as Covid-19 infection rates spiked in multiple jurisdictions. At least eight states required test-takers to sign waivers agreeing not to sue if they became infected with the coronavirus, even if they believed they contracted the disease at the exam site.

New York and most larger states pushed their summer tests to early October, in large part because of concerns about the health risks of having test takers sit for exams in large, indoor settings. New York, California, and 16 other states also moved their exams online. Those tests were devised by devised by the National Conference of Bar Examiners.

Several states, including New York, also plan to hold the February 2021 bar exam online. The New York Board of Law Examiners cited what it called a “very successful” administration of the fall exam in announcing the February test. All but 17 of the 5,167 applicants in the state who downloaded the exam software, and were scheduled to take the remote exam, successfully completed it, BOLE said. 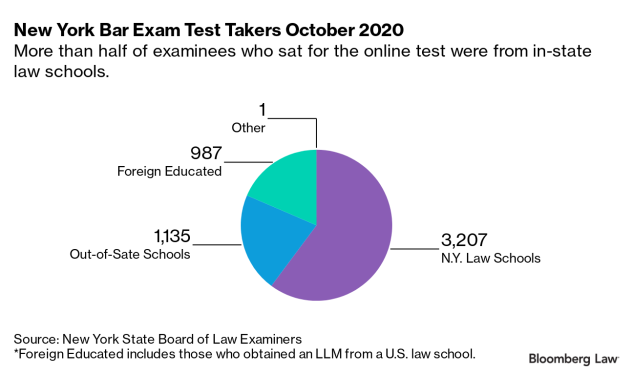 The assessments were contradicted by a survey sponsored by a pair of state lawmakers who want to let lawyers in training ditch the exam. More than 40% of law school graduates who took the recent New York online bar exam said they encountered tech problems during the test.

The online tests spurred similar complaints from test-takers in several states, who reported rejected file attachments, deletion of online notes for essay questions, and other issues.

At the same time, a handful of states and Washington D.C. decided to allow some law school grads to sidestep the exam altogether in 2020. Those states established diploma privilege, which allows grads who meet certain qualifications to become licensed without having to pass a test first. The pandemic ultimately may help improve lawyer licensing systems, experts say, by spurring states to reform, or even ax, their testing regimens.

Pass rate data from some large jurisdictions has begun to trickle in. The results offer mixed results on how the pandemic chaos affected test takers. 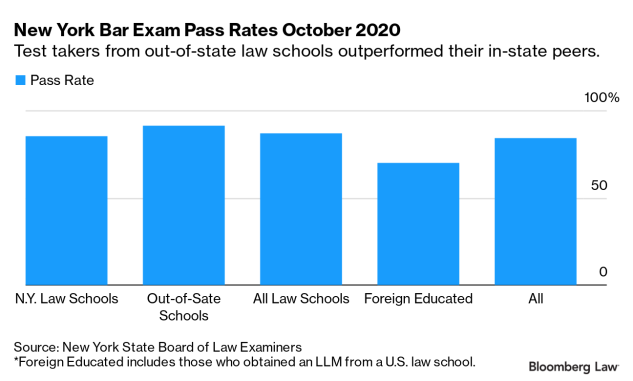 Ohio authorities reported in late November that 77.3% of October bar exam takers in the state passed the test. That was an increase from the 73.1% who passed the in-person version of the Buckeye State’s test in July 2019.

A total of 85.3% of first-time test takers in Ohio passed the test, up from 82.2% the previous year. Some states tabulate the pass rates of first-timers, in addition to or instead of overall rates, because they can better reflect how recent law school grads have fared on the test.

In Maryland, the trend line was more muddled. October test takers passed the exam at an overall rate of 70.0%, according to the state law examiner agency, a slight uptick from the July 2019 overall pass rate of 68.4%. But the passage rate for first-time test takers in Maryland—79.4%—declined from 80.6% the previous year.

Law school grads who took the October online exam in Texas also did not fare as well as those who opted for the state’s most recent in-person exam, offered in September. The overall pass rate for Texas’ online bar test was 60%, compared with nearly 77% who passed in September.

(The sixth, seventh, and eighth paragraphs include new comment from the president of the New York State Bar Association. This version also contains a new last paragraph about the bar exam results in Texas.)