Victims of sexual harassment, sexual assault, sexual abuse and their supporters protest during a #MeToo march in California in 2017.
MARK RALSTON/AFP/Getty Images

More than a third of female lawyers have been sexually harassed at work, according to findings released by a legal research firm.

The total was actually 35 percent. Of that, 23 percent of women attorneys at law firms and working in-house received sexually suggestive comments, and 17 percent reported being subjected to inappropriate physical contact, according to data released by Acritas.

The findings published Nov. 28 support the view that the legal industry is still too complacent when it comes to stopping misconduct at work that harms mostly women. But 7 percent of male attorneys also said they’d been sexually harassed.

Sexual harassment allegations at several big firms have been made public in recent years, including an instance in which a Baker McKenzie partner lost his job in February after allegations that he had sexually assaulted a female associate at the firm. 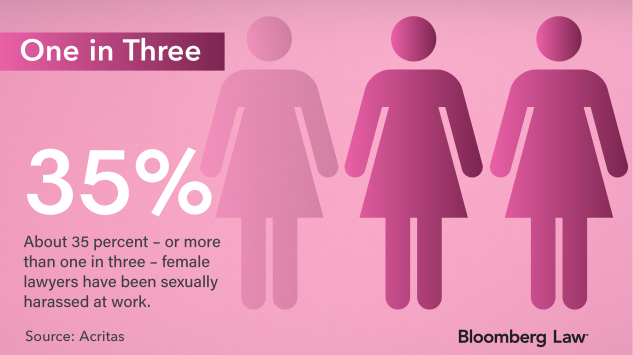 The harassment and bullying figures came specifically from the IBA survey, according to an Acritas spokeswoman.

Each of the attorneys was questioned within the past year, the spokeswoman said.

The study said 77 percent of female harassment victims and 88 percent of men never reported the incident. When asked why, respondents said the harasser was “very senior,” that they were fearful of repercussions, or responded that it’s “just an accepted practice” in legal work settings.

There’s little evidence that anti-harassment policies on their own have had a significant impact on the problem, according to the Acritas findings.

But training has been effective in certain cases. The findings noted that training reportedly reduced the incidence of harassment in the past year by about 40 percent. This was particular to cases involving line managers or supervisors.

Workplace bullying, defined as ridicule, overbearing supervision or misuse of power or position, was another common occurrence flagged by Acritas. The findings said 51 percent of women lawyers, have been bullied while at work – as have 29 percent of the male lawyers surveyed.