Welcome back to the Big Law Business column on the changing legal marketplace written by me, Roy Strom. Take a break from election coverage number-crunching to break down a different set of figures that can tell us a lot about how a surge in capital markets work is helping the richest law firms win 2020. Sign up to receive this column in your inbox on Thursday mornings.

In recent weeks, I’ve written about how large, wealthy firms are outperforming during the coronavirus pandemic.

The level of out-performance has been described by Citi Private Bank, which said the AmLaw 50 grew revenue by 7.1% over the first half of the year compared to 3.4% growth for the next 50 largest firms. And we’ve seen some of the impact that is causing. It’s showing up in talent-related trends, including special bonuses for overworked associates and strategic lateral hires by wealthy firms that clearly still feel comfortable handing out a lot of cash.

Those trends have gotten a lot of coverage, but less time has been spent explaining why those big and rich firms are leaving competitors in the dust this year.

One relatively simple explanation is that the most in-demand practices in 2020 are led by a relatively small group of elite firms. They are the firms helping U.S. companies issue record levels of debt and raise record levels of capital via listings on public markets. And on the other end of the spectrum, they are the firms helping companies through pandemic-related Chapter 11 bankruptcy proceedings.

At least for those practice areas (or maybe just their leaders), the year 2020 will be remembered fondly. Through October, they have been busier than all of 2019.

Start with the record levels of debt being issued in response to the pandemic, Federal Reserve policy, and a low interest rate environment. Through October, blue-chip U.S. companies had issued nearly $1.8 trillion in investment-grade debt, a single-year record, and a surge of 45% compared to last year, according to data compiled by Bloomberg.

The far-and-away leader in that business is Davis Polk & Wardwell. Between its work representing companies and underwriters, Davis Polk advised on nearly twice the number of investment grade debt issuances as the next closest law firm, data compiled by Bloomberg show.

Helping blue chip companies issue debt isn’t the most exciting practice at these firms, but it is profitable and firms that are successful at it tend to be among the wealthiest in the country, according to the most recent AmLaw rankings. Only one firm in that group was ranked below No. 37 by average profits per equity partner last year, AmLaw data show.

A similar dynamic has played out in the high-yield debt, or “junk bond,” market. Through October that market had already easily eclipsed last year’s level of activity, and so had most of the busiest firms in that practice, according to data tracked by Bloomberg. Many of those firms are also leaders in the blue-chip debt market, including Davis Polk, Latham & Watkins, Cravath, Swaine & Moore, and Simpson Thacher & Bartlett.

On the IPO front, U.S. companies raised more than $110 billion through October, according to data Bloomberg compiles. That is nearly 80% more money raised than all of last year, and there have been nearly 50% more IPOs for firms to advise on. That has kept lawyers at Davis Polk, Latham, Ropes & Gray, Kirkland & Ellis, and Skadden Arps Slate Meagher & Flom, particularly busy, according to the data. 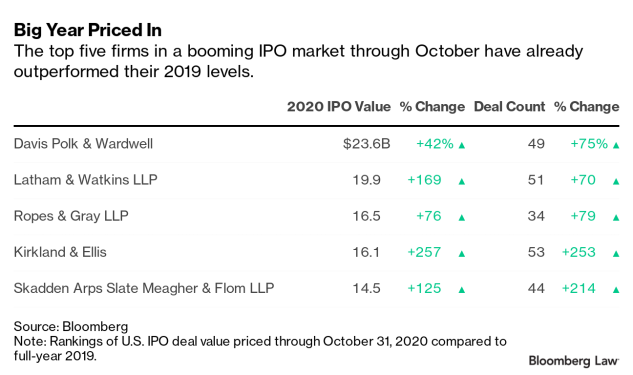 Again, that group includes some of the most profitable law firms.

I’ve written before about the market for big bankruptcy work leading to a banner year for Kirkland & Ellis and other firms. Through September, there had been 50 Chapter 11 bankruptcy filings by companies with more than $100 million in assets, according to a UCLA database compiled by Professor Lynn LoPucki. That’s the most bankruptcies to fit that description since 2009, according to the database.

A handful of law firms have a tight grip on the highly profitable business of helping move money around. The strength of the money-moving engine this year will make those firms even more profitable.

What they do with that money—move into new practice areas; secure up-and-coming talent for their most-important groups; make it more attractive for young lawyers to work at their firm; invest in new technologies—will likely have long-term consequences for the rest of the law firm market.

On Conflicts: Marriage can get in the way of referrals between law firms and litigation funders, Melissa Heelan reports. A law firm may not refer its clients to a company providing litigation finance where the sole owner of the company is married to a lawyer who is “of counsel” the firm, the New York State Bar Association said.

On Litigation Finance: Should third-party funders be able to cash in on whistleblower cases? That is what a trio of DLA Piper lawyers ask in a Bloomberg Law analysis. The Eleventh Circuit recently weighed in on this hot topic and the Department of Justice has said it’s researching funders’ work with whistleblowers.

That’s it for this week and next week! Thanks for reading and please send me your thoughts, critiques, and tips.