Milbank is upping salaries for its associates globally amid a hypercompetitive market for the legal industry’s young talent, and at least one Wall Street competitor, Cadwalader, Wickersham & Taft, has already matched.

Fourth-year associates and above will see their salaries increase by $15,000, with its most senior associates’ total salaries reaching $355,000, according to the firm. The new salary scale will take effect July 1.

Cadwalader matched the new Milbank salary scale, with its own raises also taking effect in July, according to an internal firm memo viewed by Bloomberg Law Thursday afternoon.

The decision to increase associate salaries comes as Big Law firms struggle to find enough associates, particularly in transactional practices, to handle a surging volume of work. Many firms, including those that service Wall Street clients, have vastly outperformed expectations during the global pandemic, leaving them eager to retain and recruit talent.

“Our associates have been working harder than ever, and it has been three years since we increased salaries,” said Milbank chairman Scott Edelman in a statement to Bloomberg Law. “We thought it made sense to recognize their efforts with a salary increase,” he added.

Since the start of the pandemic last year, many Big Law firms have largely turned to bonuses as an associate incentive. A slew of firms instituted a series of two-part bonuses in 2021 that could see their most senior associates taking home an extra $164,000 this year. 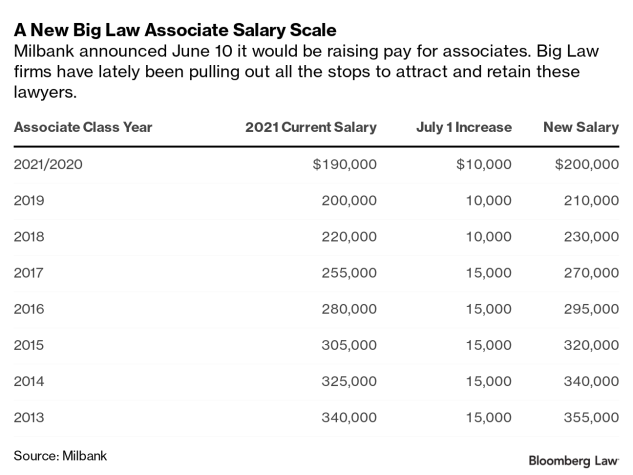 Some in the industry had speculated, prior to Milbank’s announcement Thursday, that busy firms flush with cash might try across-the-board salary raises, in addition to the bonuses they’ve been giving out.

But it was still surprising, said Joshua Holt, a former Goodwin Procter associate and founder of Biglaw Investor, which tracks pay data.

“I feel like the competition for talent is just getting tighter and tighter so I can see that driving salary increases,” Holt said.

The natural progression of salary increases is that a firm comes out first and others wait to see who follows and then all of sudden it’s a waterfall of firms that feel like they need to offer more to attract and retain talent, said Summer Eberhard, West Coast-based managing director at legal recruiter Major Lindsey & Africa.

But unlike bonuses, salary increases are a fixed cost and a long-term decision for firms.

Firms must anticipate good revenues long term to commit to these types of salary raises, said Eberhard. She said she wouldn’t be completely surprised if another firm topped Milbank’s newly announced scale.

“I think we’re only going to have to hold onto our seats and see what happens,” she added.

Salary increases for associates were inevitable and will continue, but are also evidence that the market is actively segmenting, according to Kent Zimmermann, a consultant for law firm management at The Zeughauser Group.

“This will cause heartburn in many firms that will have a hard time keeping up but also know they will put themselves at a competitive disadvantage if they don’t,” he said.

One place where the biggest bifurcation is going to happen is with the more regional and midsized firms that are doing sophisticated work but may have lower rates and lower compensation, Eberhard said. She noted that she’s already seen this become an issue with the recent special bonuses and previous compensation changes.

“How can you compete with a large firm to get an associate from a really quality firm with great credentials when the gap has become honestly as wide as it possibly can be?” she said.

(Updated with comments from Holt, Eberhard and Zimmermann throughout; updated headline, snapshot, and story with information about Cadwalader's salary increases)