Cincinnati-based Taft, Stettinius & Hollister’s $365 million in gross revenue landed it just outside the top 100 U.S. firms by revenue last year. The firm is focusing acquisitions on getting bigger in the Midwest.

Spencer Fane, founded in Kansas City, Mo., has grown its revenue by 35% to $153 million since first making the AmLaw 200 two years ago. It’s casting a bigger net to include places like Florida and Tennessee.

“We’ve done a handful of combinations, but we’d do more with equal levels of interest,” Patrick Whalen, Spencer Fane’s chair, said of its approach to acquiring firms.

Middle market law firms, a bit battered by the coronavirus pandemic, are keeping a sharp eye out to solidify and, often, to expand. Those in the back half of the 200 largest firms by revenue are judiciously growing as they face a challenging landscape.

Taft and Spencer Fane have focused on hiring individual lawyers and groups of attorneys with specific expertise, as well as combining with other law firms.

“Firms are realizing that they have to broaden their practice areas so they can be of more service to their clients,” said Howard Cohl, managing director of legal recruiter Major Lindsey & Africa’s Emerging Markets Group. 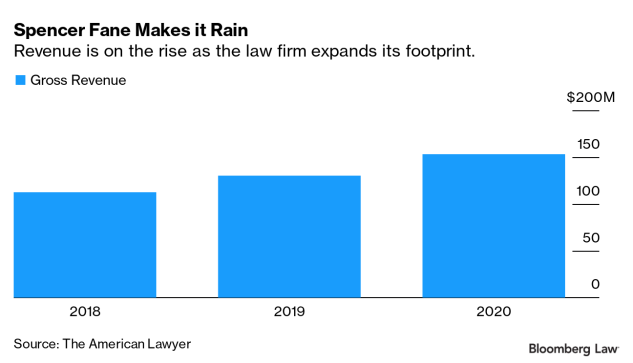 The largest 100 firms’ revenues skyrocketed to $111 billion last year, while the next 100 saw more modest gains up to a total of just under $21 billion. The chasm between the two law firm groups has given the edge to the flush behemoths, as well as the reputational clout to drive billing rates higher.

Taft decided more than a decade ago “to become super regional,” Robert J. Hicks, its managing partner, told Bloomberg Law. The firm has added lawyers by way of combinations with firms in other Midwestern cities, including Indianapolis, Cleveland, Columbus and Chicago.

The firm has added about 135 lawyers in less than two years, growing its headcount to approximately 640 attorneys, said Hicks, who became managing partner in 2017. Its revenue has jumped from roughly $185 million three years ago, to what the firm expects to be in the neighborhood of $390 million this year, he said.

The firm says the cost effectiveness of its Midwest office locations benefits clients with lower billing rates—which are largely standard across locations—and lawyers with a reasonable cost of living.

Taft Law, as it likes to be styled, is best known for the sweeping case partner Robert Bilott brought against chemical giant DuPont over environmental pollution from its manufacture of a toxic chemical connected with Teflon. The case, which was made into the 2019 movie “Dark Waters,” resulted in a $671 million settlement for some 3,500 plaintiffs. The win vaulted the patrician firm, founded in 1885, and with ties to the family of former President William Howard Taft, into greater public awareness.

In recent years, Taft has added dozens of lawyers and emphasized diversity in its management structure, said Hicks. The firm also made some major structural changes by eliminating its dual partnership tracks, lowering its billable hour requirements, and spreading younger lawyers throughout its leadership structure, he said.

“It was hard to break up the club, and we couldn’t have done it without input from the ‘old guard,’” Hicks said, explaining that the more established partners cooperated in overhauling the firm’s strategy.

Even as their bottom lines are generally strong, mid-market firms like Spencer Fane and Taft have been looking to expand as their revenue increases lag far behind giant law firms, some of which reach the billions.

Spencer Fane announced in August that it would combine with Nashville-founded Bone McAllester Norton to add 40 lawyers to its attorney roster. That gives the firm a presence in 20 cities.

“Over time, a lot of firms have vastly increased their footprint, adding more offices so they can meet the needs of their corporate clients and don’t have to hire local counsel,” said Cohl.

Still, an expected surge of law firm tie ups has yet to happen this year. The pace of mergers picked up in the last three months, but that activity still lags behind the levels seen before the pandemic.

Legal consultancy Fairfax Associates and other merger watchers are rosy on upcoming prospects, particularly for next year as negotiations slowed by pandemic hindrances gradually come to fruition. Kent Zimmermann, a Zeughauser Group consultant who works with law firms across the size spectrum, said interest by both larger and smaller firms in mergers recently “has increased by a factor of four.”

Spencer Fane in July added a 17-lawyer insurance group to augment its practice which focuses on providing clients with litigation defense in commercial, class and bad-faith actions. One month earlier, the firm added 22 new attorneys in Denver, broadening its litigation and dispute resolution practice group, as well as its labor and employment capabilities.

The firm’s clients include meat producer , as well as , , and Rocket Mortgage LLC, according to a Bloomberg Law review of federal court dockets.

Whalen said mid-market firms can thrive if clients decide to seek legal expertise at a lower price point and avoid higher billing rates. In the meantime, he noted the firm has not only fortified its base but also broadened its offerings.

“When we look at the trends, including the inevitability of new entrants in legal services, we have to be thinking of alternatives to our existing structure. We are remaining opportunistic and agile,” he added.