The law firms will pay up to $15,000 for first year associates and $115,000 for senior associates, a spokespersons for Hogan Lovells and Mayer Brown confirmed. The new scale marks a 15% increase from last year, when senior associate bonuses topped out at $100,000.

Associates at major firms have already seen two rounds of seasonal bonuses this year on top of a base salary increase that raised first year salaries as high as $205,000. The inflated compensation packages come after a banner year for major law firms, some of which have seen record-breaking financial success. 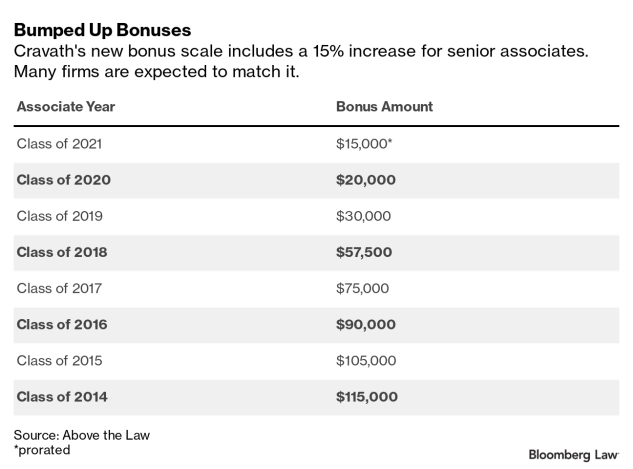 The latest bonuses were first reported by Above the Law.

Hogan and Mayer Brown are among the largest firms in the country by gross revenue. Hogan reported more than $2.3 billion in revenue last year, while Mayer Brown bringing in more than $1.5 billion, according to data compiled by The American Lawyer.

Boies Schiller, Cadwalader, and Paul Weiss have also announced special, performance-based bonuses for their busiest associates. Hogan will consider increasing bonuses for “outstanding contributions significantly in excess of expectations,” according to a memo sent to the firm’s U.S. associates Thursday.

(Updated throughout to include information on Hogan Lovells bonuses.)