Students clean the Pillar of Shame sculpture at the University of Hong Kong, which commemorates the Tiananmen Square crackdown, in Hong Kong on June 4, 2021.
Chan Long Hei/Bloomberg

Mayer Brown’s decision to step aside from a controversial representation in Hong Kong has led to a call for a “China-wide boycott” after the law firm announced that it would no longer assist an effort to remove a monument commemorating the Tiananmen Square massacre.

Former Hong Kong chief executive Chun-ying Leung called on companies and organizations across China to stop doing business with the multinational law firm in a Facebook post Sunday. He accused the firm of bowing to political pressure from the U.S. and Europe in backing away from longtime client Hong Kong University’s push to remove the “Pillar of Shame” monument.

“From here on, no client in Hong Kong or Mainland China, particularly those with Chinese government connections, will find Mayer Brown dependable,” Leung wrote.

The monument, created by Danish artist Jens Galschiøt, has been a fixture on the university’s campus for more than two decades. It graphically depicts the 1989 massacre, in which hundreds—potentially thousands—of pre-democracy protesters were reportedly killed.

Mayer Brown announced on Friday that it would no longer represent the university in seeking the statute’s removal. The decision came after the firm was roundly criticized for sending a letter to a pro-democracy organization in Hong Kong, demanding that the statue be removed.

The firm did not immediately respond to a request for comment on Leung’s call for a boycott. 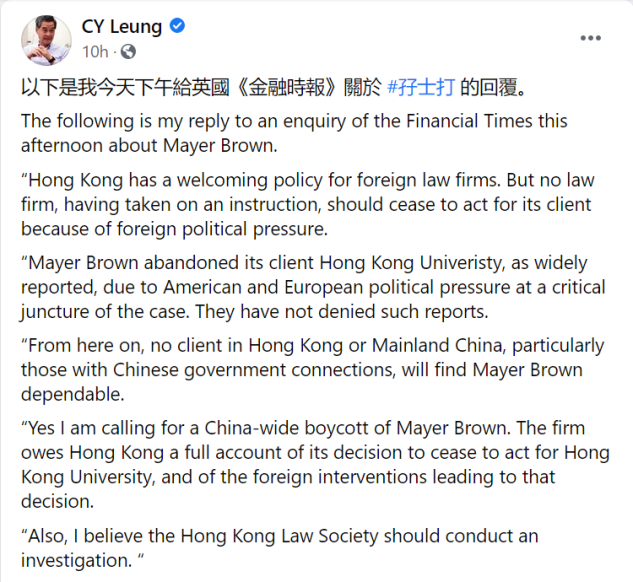 Hong Kong is a special administrative region of China, a designation designed to give it some level of independence. Its relationship with mainland China has been the subject of debate, both inside Hong Kong and China and around the world, in recent years.

Mayer Brown, founded in Chicago more than a century ago, reported over $1.5 billion in gross revenue last year. It has offices in more than 20 cities, including New York, London, Paris, Dubai, Beijing, and Singapore.

At least 20 human rights and pro-democracy groups criticized Mayer Brown for its work for the university and urged the law firm to stop representing the university in an Oct. 11 open letter.