An industry that once attributed many of its best qualities to its dedication to pay partners based on seniority is down to just two strict adherents to the so-called “lockstep” compensation system after Cravath, Swaine & Moore adjusted its model on Monday to fend off poaching.

While firms keep compensation information close to the vest, Wachtell, Lipton Rosen & Katz and Debevoise & Plimpton are believed to be the two last-standing U.S. firms paying partners strictly based on their tenure. Even firms that make “adjustments” to their lockstep models rarely share the specifics. But what’s clear is that the near-standard way the most profitable firms once paid their partners is on the verge of extinction.

“It’s obsolete. The history of all of this is kind of unraveling before our eyes, and it just shows you have to keep changing,” said Kay Hoppe, a Chicago-based recruiter for Big Law firms. “Evolution, even with law firms, is inevitable.”

Cravath’s move on Monday, which a recruiter called “historic,” came after years of discussions within the firm itself and the broader profession about whether, like plenty of firms before it, the esteemed partnership eponymous with so much Big Law tradition would have to retreat from its egalitarian pay structure.

The last straw may have been the departure of Damien Zoubek, a top-flight M&A partner who departed Cravath in September for Freshfields Bruckhaus Deringer, a firm that itself modified its compensation system to lure partners with reported eight-figure salaries. 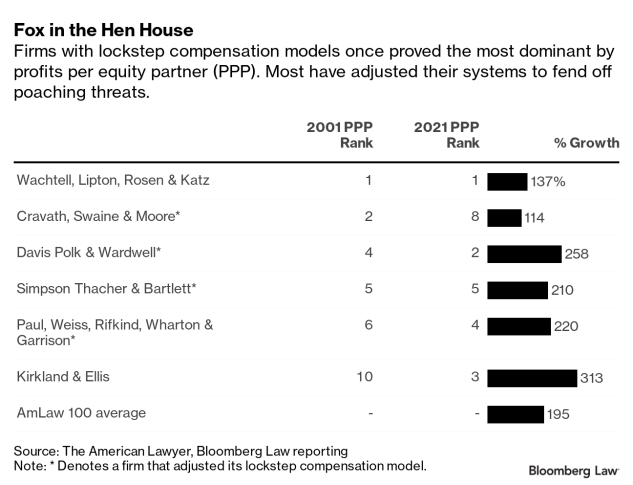 Big Law’s talent battle has only gotten more aggressive this year with so much money sloshing around the halls of the country’s most elite law firms following a record year for deal-making. That means the lockstep system elsewhere could remain under threat.

Wachtell and Debevoise did not respond to requests for comment.

Law firms using the lockstep model have often said it is the reason they are “collegial” and keen to share work with one another. There are no internal fights over origination credit and partners are incentivized to provide the best “client service,” the long-standing argument has gone.

Cravath’s decisions have had outsize influence on the Big Law market ever since Paul Cravath in the early 20th century developed the “Cravath System” for hiring and training its lawyers. The firm adopted the lockstep compensation model around 50 years ago.

The industry’s homogenous pay scale is still called the “Cravath Scale,” even though competitor firms have outbid it in recent years. Most recently, Davis Polk & Wardell, which abandoned its strict lockstep model just a year ago, forced Cravath this week to match its special bonus scale for associates.

But long before Cravath’s move, the future of the lockstep model had been in serious doubt. Firms such as Kirkland & Ellis had been successful luring up-and-coming partners at lockstep firms by offering large paychecks and a promise that they won’t have to wait their turn in line to run their own practices. Kirkland, on its own, has hired four Cravath partners—something that was inconceivable even a decade ago. Firms including Davis Polk & Wardell, Paul, Weiss, Rifkind, Wharton & Garrison and Sidley Austin have also hired Cravath partners.

Underlying that change has been the financial success of firms outside the traditional Wall Street firms that had led the industry on profitability. Two decades ago, the nation’s most profitable law firms almost unanimously followed the lockstep compensation model. Wachtell remains the most profitable law firm by a long measure, and the former strict lockstep firms have all remained near the top.

But outsiders have broken into the top rung as clients have relied on individual lawyers rather than law firms and partners have been more willing to move between firms.

“This is a very different generation of people who are coming up without the same expectations that people had when they graduated law school in the 1970s or 1980s,” said Jeffrey Lowe, global leader of the law firm recruiting practice at Major, Lindsey & Africa. “And when another great firm is dangling a very sizable amount of money in front of you, it’s very easy for someone to think: ‘I’m going to be working 2,500 hours or 3,000 hours anyway, if they’re willing to pay me millions more to do it, then why wouldn’t I move?’”

Breaking lockstep can be a challenging moment in the lifespan of a law firm, and it does not guarantee a firm will keep the lawyers it fears could leave. That challenge was highlighted in 2018 at Freshfields, which reportedly modified its compensation system that year only to see star private equity partner David Higgins depart for Kirkland.

Details of how Cravath modified its compensation system were scarce. Generally, law firms can pay top-end lawyers more by either breaking out individuals from the traditional compensation model or by creating a bonus pool from the firm’s profits doled out by discretion. Regardless of how it’s done, the goal is the same: to redistribute more money toward the top lawyers who are at the biggest risk of being poached. 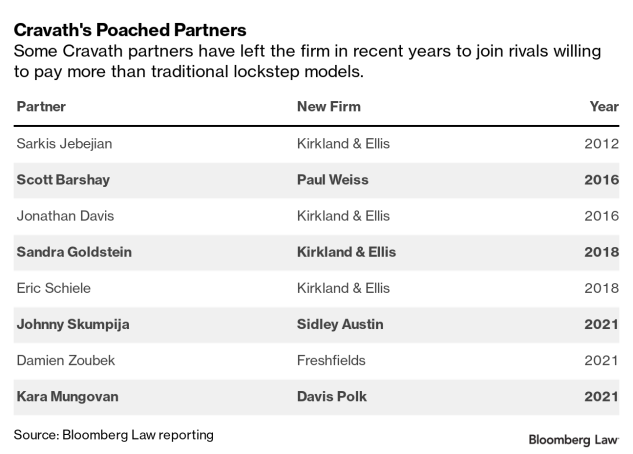 In order to retain its top lawyers, the high end of Cravath’s partner pay scale would likely need to bump above $10 million, said Mark Jungers, a recruiter for Big Law firms at Lippman Jungers Bala LLC. But the firm likely wouldn’t have to move the scale all the way to what other firms are willing to pay, considering there is still “some glue” that will keep partners from leaving.

“You don’t have to go all the way to what Paul Weiss and Kirkland could pay your people to leave. But you have to go further than you probably want to,” Jungers said. “Because you have to then find that money elsewhere. And so when firms do this, there are two big changes: Figuring out how far you go, and then figuring out from whom you’re going to take the money. And both of those changes fundamentally alter a firm’s culture.”

Paul Weiss Chairman Brad Karp told Bloomberg Law in October that 85% to 90% of its partners remain within the traditional pay structure after the firm modified its lockstep system. He said it is in Paul Weiss’ best interest to pay its top partners market rates so the firm doesn’t lose them in an environment where partners move between firms more than ever.

“The lockstep model is going to be under attack for the foreseeable future,” Karp said. “The top tier players are making so much money and there is so much mobility among law firm partners that it is very easy to pick off stars.”