Litigation finance company LexShares is releasing its historical returns from investing in lawsuits with the hope the disclosures will help the six-year old firm meet a fundraising target of $100 million.

The firm, founded in 2014 by a former Deutsche Bank associate, said it had already raised $30 million for the new fund and is seeking roughly $70 million more from accredited investors.

LexShares joins a growing group of litigation finance players to announce new fundraising since the start of 2020, as many in the industry expect a surge of spending on coronavirus-related lawsuits despite a flagging economy.

The firm has “won” 70% of the 43 cases in its portfolio that have concluded, meaning investors received more than their principal. The median internal rate of return for those cases, an annualized figure, is 52%.

The firm’s ongoing investments, if resolved successfully, would bring in $159 million as of early June, according to an investor presentation seen by Bloomberg Law. Most of the firm’s investments are structured to return multiples of the original investment based on the duration of the case.

The company launched in 2014 as an online marketplace allowing individual investors to purchase stakes in lawsuits for as little as $5,000. In 2016, LexShares launched a software product that determines whether recently filed lawsuits are good candidates for litigation finance.

LexShares says that tool, branded Diamond Mine, has led plaintiffs to apply for $855 million in funding in the past year.

LexShares founder and CEO Jay Greenberg said the company typically invests in less than 5% of opportunities. He said that number was unlikely to change even with the infusion of capital.

“We’ve proven that our underwriting function works to generate what we think are strong returns,” Greenberg said in an interview. “We know we have this sustainable deal flow mechanism. And that gives us the ability to be extremely selective in what we are deciding to invest in.” 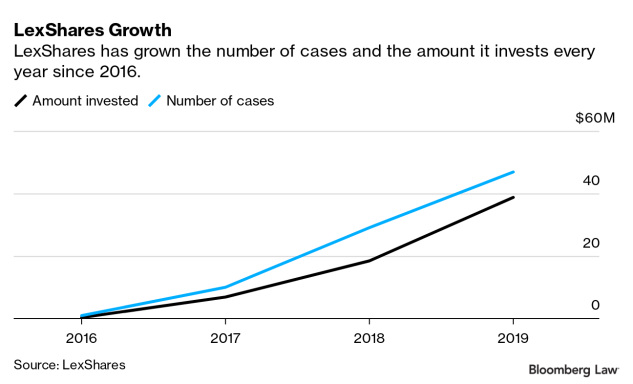 LexShares’ investment figures provide a unique level of detail for a private litigation finance fund, which traditionally have reported their returns only to their investors. Typically only publicly traded funders like and Omni Bridgeway release financial information more broadly.

The LexShares Marketplace Fund II fund has a minimum investment of $250,000, and investors must meet the definition for an accredited investor.

The company is also offering an insurance policy through AmTrust International Insurance Ltd. that protects investors’ principal in the new fund. The policy requires a 5% upfront premium and takes 10% of the returns on individual cases, Greenberg said.

“That provides a lot of credibility to LexShares’ track record and our performance over the past six years,” Greenberg said. “We think it is unique and will open up the investments in LexShares Marketplace Fund II to a broader demographic of investor.”