The New York boutique litigation firm Selendy & Gay is only ten months old, but its year-end associate bonuses are already surpassing the high-water marks set by many top law firms for these payouts.

By contrast, firms that are following the so-called “Cravath scale” named after the uber-prestigious New York-founded firm Cravath, Swaine & Moore, are doling out between $15,000 and $90,000 to associates from the same annual classes. Several top firms have hewed closely to the Cravath scale for their associates or imitated it.

But for the select few from Selendy & Gay—the firm boasts just 20 associates at present out of 30 attorneys total, according to its website—the amounts represent a full 50 percent jump from the Cravath scale for associates from each year’s class. 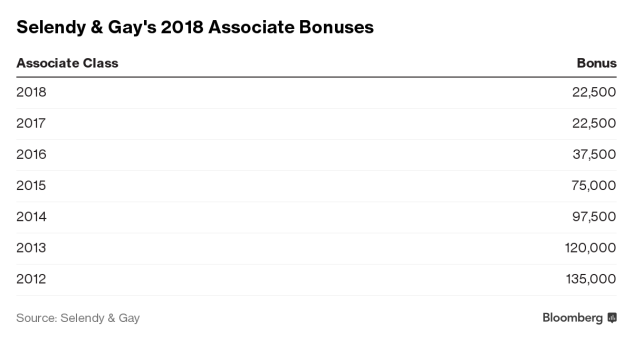 “We’ve hired only the best associates and we’ve given them great opportunities for creative and meaningful work,” Selendy & Gay Co-Managing Partner David Elsberg said in the firm’s bonus announcement. “In turn, our associates have done outstanding work for our clients, and deserve to be recognized for their efforts.”

The firm’s largesse has extended to associate salaries as well. In June the firm said it would be paying hefty annual salaries of between $190,000 and $340,000 to associates from classes of 2010 through 2017..

The firm got its start in January when Quinn Emanuel senior partners Philippe Selendy and Faith Gay announced they were leaving to set up their own shop.

Gay was co-chair of Quinn Emanuel’s national trial practice at the time, and Selendy was chair of Quinn’s securities and structured finance practices.

Since Selendy & Gay broke away, the firm has been locked in a court dispute with Quinn Emanuel over a provision of that firm’s partnership agreement. In June, Quinn attorneys urged a New York state court to move the dispute into arbitration in California, according to reports.

With assistance from Melissa Stanzione.

(Revised to clarify number of individuals categorized as associates.)