Welcome back to the Big Law Business column on the changing legal marketplace written by me, Roy Strom. Today, we look at a bubbling mystery: Why lawyers’ political contributions declined this cycle. Sign up to receive this column in your Inbox on Thursday mornings.

Lawyers don’t like the candidates? Or what’s going on?

Political contributions by lawyers and law firm employees are down more than 30% since the last midterm elections. Lawyers haven’t given this little since 2010. The profession is on track to match its 2006 level of giving, when Dennis Hastert was speaker.

Lawyers’ tight wallets come as total midterm spending is projected to hit a record $9.3 billion, the Center for Responsive Politics, a non-profit group that tracks campaign giving on OpenSecrets.org, said in September. The previous record, $7.1 billion, was set in 2018.

The drop-off in lawyers’ giving has baffled experts.

“No matter how you slice it, their prominence in the campaign finance landscape has gone down,” said Andrew Mayersohn, committees researcher at OpenSecrets.org.

So far this cycle, Skadden’s lawyers and staff contributed less than $400,000, their lowest amount since 1998, according to OpenSecrets.

That’s down sharply from the roughly $1 million they contributed for the 2018 midterms.

Only a handful of large firms topped their 2018 contribution levels, according to OpenSecrets, including Akin Gump Strauss Hauer & Feld (up 46%); Buchanan Ingersoll & Rooney (up 24%); and Kirkland & Ellis (up 10%).

Lawyers’ partisanship remained relatively constant. More than three quarters of the contributions were made to Democrats, which is roughly in-line with the group’s historical partisan leanings. 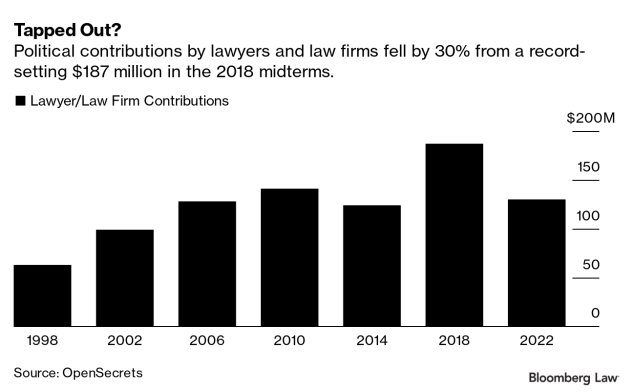 One factor that may be contributing to the decline: Lawyers working from home.

Big Law firms have routinely hosted political candidates for meet-and-greet sessions with lawyers. That is often a way to convince some partners to donate to candidates, said Jon Henes, a former Kirkland & Ellis partner who served as Kamala Harris’s national finance chair in 2020.

This midterm season, though, Henes said many of those events were held over Zoom, which didn’t draw the same attraction as the chance to shake a politician’s hand.

Lawyers, law firm employees and law firm political action committees have contributed about $130 million to political candidates and groups this midterm cycle, down from nearly $190 million in 2018, according to OpenSecrets.

Excluding unemployed and retired donors, lawyers and law firm employees accounted for 7.8% of the hard-money federal contributions in the 2022 cycle. That number has fallen from 10.1% in the 2018 cycle, Mayersohn said. 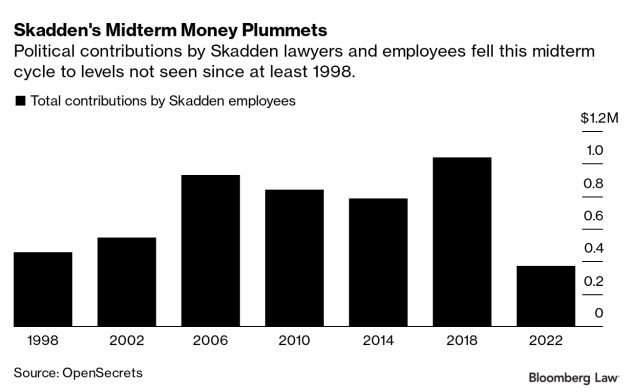 The large differences in donations this year are difficult to explain, said Derek Muller, a professor at University of Iowa College of Law who’s studied law firms’ political contributions.

Some law firms stopped donations from their political action committees to Republican Congress members who voted against certifying the 2020 presidential election. Some of those firms, such as Squire Patton Boggs, resumed donations to those members shortly after Jan. 6.

Even so, spending by law firms’ political action committees is only a fraction of the total contributions lawyers and law firm staff regularly make as individuals—something law firms don’t control via policy.

And the decline in contributions isn’t limited to Republicans. Lawyers gave significantly less to Democrats—a decline of about $44 million in total from 2018—even as their preferred political party faces a fierce battle to maintain majorities in both houses of Congress.

There’s been an influx of personal information about small donors (those who give under $200) as online fundraising platforms have fueled a surge in small, individual donations over the past two elections. Those platforms must report personal data on all donors, whereas individual donors giving directly to candidates only report personal info, such as occupation, on donations over $200.

But lawyers’ prominence isn’t being diluted by a growing number of small-dollar donors, Mayersohn said. The share of hard-money contributions from lawyers and law firms also fell from 2018 to 2022 when limiting the data sets to contributions of over $200, he said.

Of course, the midterm elections haven’t happened yet. Could the final campaign giving reports show a late surge in lawyer giving? Don’t bet on it.

It’s unlikely the final donations will significantly close the gap on the 2018 figures. For instance, Skadden’s lawyers and employees contributed only about $62,000 of the $1 million they donated in 2018 near the end of the cycle, data show.

What’s going on, law firms? If you’re a lawyer who’s stopped giving to politicians, let me know why.

On Fire: My colleague Justin Wise had three great stories over the past week. He told the tale of how leaked videos led to the demise of a once-heralded crypto lawyer. He profiled the Quinn Emanuel partner who’s become crucial to Elon Musk’s Twitter management. And he wrote about Perkins Coie’s transition away from political work.

On Crypto Restructurings: Paul Hastings was tapped by a group of convertible bondholders as one of the world’s largest Bitcoin miners faces concerns it could run out of cash by year-end, Rachel Butt reported for Bloomberg.