Why would accomplished women lawyers of color—who can go anywhere they please—want to stake their careers in a red state like Texas?

I can’t believe I’m saying this: Maybe Texas is no longer the last place I want to be on earth. I say this as someone who spent most of my childhood and all of my adolescence trying to get the hell out of Texas—something which I’ve achieved spectacularly by living in Manhattan for over three decades.

Why am I softening on Texas these days? The immediate reason is that I recently returned from Austin where I attended the University of Texas’s 2022 Women’s Power Summit on Law & Leadership. I met a lot of awesomely smart women from all over the country there but one group stood out to me: Female lawyers of color who made the choice to live and practice in Texas—and seem happy about it.

Maybe that doesn’t sound so shocking to you but for me it’s unfathomable. If you’re a highly accomplished person of color, who can work anywhere in this nation, why pick a state that seems intent on bringing back the 1950s? (In case you need a refresher, Texas has draconian laws that restrict abortion rights, access to voting, and the rights of the LGBTQ community—though you can carry your gun most anywhere.)

Admittedly, I carry personal baggage on the subject. I grew up in Houston in the dark ages of the ‘60s and ‘70s. As the only Asian—and, by my recollection, the only minority—at the Red Elementary School in Houston, I remember being taunted by kids who called me “Jap” and “Chink” or made slanty eye or flat nose gestures.

What’s worse, no adult or child ever intervened on my behalf. Racism was so ingrained that it wasn’t even noticed. It was a different era, and neither I nor my parents would have even dreamed of raising the issue of racism with the school. As immigrants, we simply put up with such indignities. (Today, the school is 61% Hispanic, 18% Black, 4% Asian, and 16% White.)

To say that I felt like the “other,” would be an understatement. So it is pretty astounding that some of the Texas women of color I met at the conference don’t seem to feel that racism touched their personal or professional lives.

“I don’t think I ever felt racism,” said Daniella Landers, a partner at Womble Bond Dickinson’s Houston office, who grew up in an African American neighborhood in Houston. A graduate of Purdue University and the University of Texas School of Law (class of 1996), Landers lived in Los Angeles and Detroit before returning to her hometown in 1999 to be closer to her family.

Though Landers said people made assumptions about her background (”Older White men have assumed that I went to an HBCU”), she said it “came mainly from lawyers in New York or other offices—not fellow Houstonians.” She added, “I don’t want to say it’s racism or sexism but clearly they were trying to size me up.” As for prejudice in Texas, Landers said, “it’s mainly driven by economics rather than race.”

Instead of feeling sidelined by her status as an Asian American female lawyer in Texas, trial lawyer Lisa Tsai, a graduate of Princeton University and the University of Texas School of Law (class of 2001), saw it as an advantage.

“Because I grew up here, I understood there was a growing opportunity for women and people of color to be more prominent,” said Tsai, a former Latham & Watkins associate who’s now a name partner at litigation boutique Reid Collins & Tsai in Austin. “You know you will be a pioneer—which was very much my experience in Texas. I don’t see other folks that look like me who are senior and experienced in trial work, but I felt I needed to be that person.”

Where are they getting this confidence? And how is it that they seem to feel they belong in Texas? Is it because the Lone Star is such a drastically altered place from the one I knew?

The short answer is yes, and it has everything to do with the rapidly changing demographics of the state. Since 2010, Texas has gained more residents than any other state, and its Hispanic population is almost as large as the non-Hispanic White population, according to The Texas Tribune, based on 2020 U.S. Census figures. Now, people of color account for 95% of the growth.

And the place that rivals New York for diversity is (gasp) Houston, my hometown. In fact, it is purportedly the , according to research by Wallethub.com, a personal finance site. 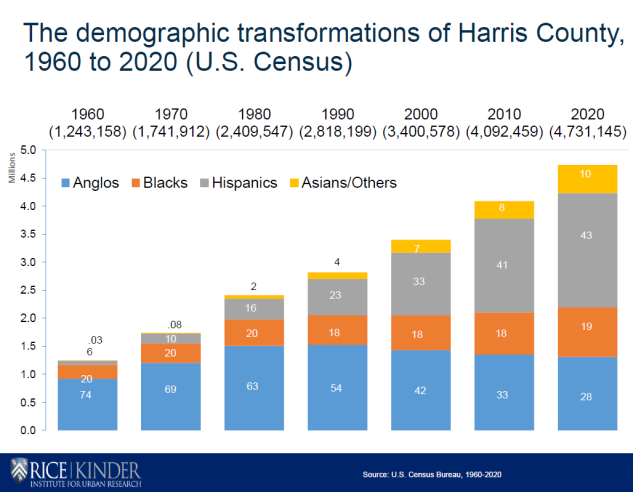 The demographic transformations of Harris County, Texas, 1960 to 2020 (U.S. Census)
“Prophetic City: Houston on the Cusp of a Changing America” by Rice University Kinder Institute for Urban Research

“When I came to Houston in 1972, I shared your feelings. I thought it was a pathetic place—just a bunch of White men who wanted to make money,” said Rice University professor emeritus Stephen Klineberg, an authority on the city. “Then the world changed in the 1980s when the oil boom collapsed, and it had to embrace diversity and immigration. This is Houston’s destiny.”

In Klineberg’s book Prophetic City: Houston on the Cusp of a Changing America, he writes: “No matter how many undocumented immigrants are deported, no matter how high a wall you try to build... no conceivable force is going to stop this city, state or nation from becoming more Latino, more Asian, more African American, and less Anglo as the twenty-first century unfolds. The demographic transition is a done deal. Houston is America on demographic fast-forward.”

Prophetic words, but aren’t there still vestiges of racism in Texas?

“There’s still prejudice,” said Klineberg. “A lot of Anglos are worried because this is not an Anglo country anymore... But people of different races are falling in love and having multiracial children. There’s the psychology of inevitability at play. And it triggers the idea that it is not terrible.”

Klineberg’s parting words to me: “Come back to Houston!”

Visit? Definitely. But stay? Not ready for that.