“Work hard, play hard” is often the busy professional’s mantra. “Work hard, and keep on working” might be a better description for many lawyers.

The long hours and pressure of always being on call for clients can wear lawyers out. The legal profession may finally be waking up to the problem after a seminal study from the Hazelden Betty Ford Foundation found widespread mental health problems among attorneys.

“The idea that being stressed out of your skull is a badge of honor” is beginning to recede, Dan Lukasik told Bloomberg Law. “The tide is turning,” he said, but “this will take a cultural shift.”

“My guess is it’s going to take five or 10 years to gain traction,” said Lukasik, a lawyer and director of workplace well-being with the Mental Health Association of Erie County in Buffalo, N.Y.

No Official Limit on Vacation Days

On paper, it sounds like lawyers get a lot of time off. Many law firms offer attorneys unlimited leave or don’t bother to track days away from the office.

Labor and employment law firm Ogletree Deakins doesn’t measure how much vacation time its lawyers use, and neither does employment, labor, and immigration law firm Carothers DiSante and Freudenberger. Both firms let their attorneys take as much time off as they wish, as long as they meet their professional responsibilities. 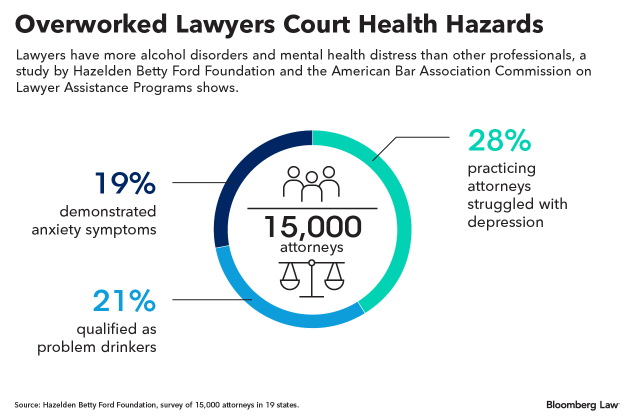 In practice, though, “We know there will be times that you work until midnight or on weekends, so we’re not going to micromanage the time that you take off,” Bult said.

Four Weeks Is Norm for Lawyers

Approximately 40 percent of associates at large firms have unlimited vacation days, according to Matt Moody, a senior law editor at career research company Vault. At law firms that have official policies, 20 vacation days per year is the norm, with some senior associates getting as many as 25, Moody told Bloomberg Law. These figures are from a February-March survey of 11,671 associates at law firms with at least 150 lawyers.

These figures are more generous than the overall numbers for U.S. workers. Most workers in private industry have to toil as long as 20 years before they get 20 days of paid leave, and they get only 15 days after five years, according to data from the Labor Department’s Bureau of Labor Statistics.

But taking vacations while billing enough hours, remaining available to clients, and meeting court deadlines can be tricky. The Vault survey found only 31 percent of associates used all their vacation days, Moody said.

Gone but Still On Duty

When lawyers do take time off, they often spend big chunks of time working from their vacation locales.

Bult reminds vacationing associates to take a laptop and “check it periodically” even though Constangy tries “really hard not to bother them,” she said. Associates wind up working during vacations less frequently than partners do, however, because “it’s easier for associate assignments to be shifted to someone else,” Bult said.

An attorney’s specialty also can affect the likelihood of vacation plans coming to fruition. “Litigators tend to know their schedules a little better because courts set schedules,” whereas merger and acquisition “deals can pop up very quickly,” Moody said.

Skipping vacations can “be a set-up for anxiety, depression, alcoholism, and burnout,” lawyer and licensed alcohol and drug counselor Patrick R. Krill told Bloomberg Law. Krill is the lead author of the Hazelden study.

Lawyers have more alcohol disorders and mental health distress than other professionals, according to Hazelden. The Hazelden study of 15,000 attorneys found that 28 percent of practicing attorneys struggle with depression, 21 percent are problem drinkers, and 19 percent have anxiety. Hazelden is an addiction treatment provider that runs a specialized program for legal professionals.

The Hazelden study and the task force report inspired many law firms to think more about their lawyers’ physical and mental health.

Getting Serious About Vacations

There is also “a compelling business case” for considering lawyer well-being, Krill said.

Law firms are starting to recognize that when lawyers don’t take enough vacations, their use of sick time increases and their productivity decreases. Law firms are beginning to “think of vacations as periodic maintenance,” Lukasik said.

“A lot of young lawyers all over the country tell me they’ll take a job at a big law firm for a few years to pay off debts, but there’s no way they’ll stay there and work 80 to 90 hours a week until they make partner,” Lukasik said.

“The next generation of about-to-be lawyers are very attuned to these issues,” Krill said.

A firm striving “to be proactive on this issue” could devise a plan “for managing client expectations,” Krill said. A law firm could tell a client that “we’ll make sure there will be seamless coverage” even though a particular lawyer may be offline for a while, he said.