It was just supposed to be an “appreciation bonus,” not start a wage war.

In September 2020, Cooley LLP, a Palo Alto-based law firm, announced it was handing out $2,500 to $7,500 in one-time payments to associates. The bonuses came as the firm — along with many others in the legal industry — realized it was both flush with cash and facing worker burnout during the pandemic.

While most attorneys at larger firms expect to receive one annual bonus, Cooley’s move was quickly matched by others, including Davis Polk & Wardwell LLP and Willkie Farr & Gallagher LLP. One payout was becoming two and now potentially three in a single year.

Bonuses soared to as much as $140,000 last year for a senior associate, and they’ve kept coming in 2021, with a potential windfall of $164,000 on top of salary by year end. Alongside the added cash, firms promised more time off and extended work-from-home arrangements, all part of an effort to retain and attract talent for what are often grueling 100-hour work weeks. 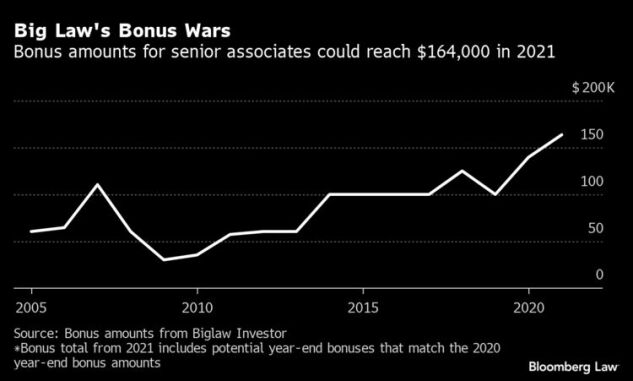 The rapid rise in bonuses has created an arms race of sorts in the industry, which has long had a lockstep approach to salaries. Lawyers for the largest U.S. firms traditionally earn based on the “Cravath scale,” a historical practice of following the wages set each year by Cravath Swaine & Moore LLP.

First-year associates joining a major firm in 2021 will be paid $190,000 in salary, an amount that hasn’t changed since 2018, according to Biglaw Investor, which tracks compensation. An associate entering her or his eighth year with a major firm should expect to be paid $340,000.

The bonus windfall was due in part to the feverish rush of corporate work that hit in the latter half of 2020, most notably a rash of restructuring filings, as well as new efforts to raise capital and the blank-check merger frenzy.

The U.S. legal industry, which reported 2.3% unemployment in March, is far from the only one boosting pay and offering better working conditions to hold onto or attract workers. including Goldman Sachs Group Inc. and JPMorgan Chase & Co. are also facing strong demand for investment bankers and offering junior workers more money, vacations and even forced Saturdays off.

Holding onto young lawyers is critical as the market for associates heats up, especially for those practicing corporate law.

“We’re not seeing firms ask us for one or two associates. Some are coming to us saying we need 10,” said Summer Eberhard, West Coast-based managing director in the associate practice group at legal recruiter Major Lindsey & Africa.

The boom in legal services comes after law firms had prepared for the worst last summer, in the wake of the coronavirus. Many firms cut salaries for lawyers and staff, while some furloughed their employees to get through what they thought would be a massive economic downturn.

Instead, 2020 turned into a windfall year for the industry’s top 100 law firms by revenue, which brought in almost $111 billion in revenue, up 6.6% from 2019 and the biggest increase since 2018, according to data from the American Lawyer.

The highest-grossing law firm, Kirkland & Ellis LLP, brought in $4.8 billion in revenue last year, while the runner up, Latham & Watkins LLP, brought in $4.3 billion. Across the industry, the average equity partner — a senior lawyer who shares in the firm’s profits — took home $2.23 million, an increase of 13% from the prior year. Top performing associates at big U.S. law firms can earn potential payouts in excess of $500,000, based on seniority.

The ripple effects are unusually being felt beyond just New York City and Silicon Valley — smaller firms and international firms now find themselves in a battle to keep pace with Big Law’s richest to keep their younger talent. Remote work options have complicated local salaries.

“The bonuses are more impacting the industry beyond the walls of what it typically has,” Eberhard said. “This has broken that barrier.”

Big Law firms are paying in top of the market in regions where it would have previously been completely unheard of, like Atlanta, Milwaukee, and Seattle, she said.

The bonus bonanza has also made its way to international markets: U.S.-based firms including Milbank LP, Paul Hastings LLP and others extended bonuses to their London associates. Some of the elite U.K.-based firms in the so-called “Magic Circle” have followed suit — handing out one-time payments amounting to 5% of salary.

A newly qualified lawyer at one of London’s top firms can earn as much as 100,000 pounds ($142,000) a year. That mark is still well below what some U.S. firms pay in London. Houston-based Vinson & Elkins LLP, for example, offers their junior lawyers in London 147,500 pounds a year.

Canada’s top firms, known colloquially as the “Seven Sisters,” as well as other national and international firms have instituted a pair of bonuses for their associates, each equaling 10% of their base salary as well as signing bonuses, said Dal Bhathal, legal recruiter and managing partner of the Canada-based Counsel Network.

“Associates are very busy, and these bonuses help compensate them for the additional work that they’re doing coupled with trying to do it in a pandemic,” she said.

Many top U.S. law firms are also handing out “exorbitant” signing bonuses, ranging from $20,000 up to $100,000 for corporate practice attorneys, Eberhard said. Business Insider reported that mergers and acquisitions associates at Kirkland & Ellis are getting signing bonuses as high as $250,000.

“Firms are being much more willing to pay what they need to pay in order to get really quality associates in the door,” Eberhard said.

Once they have the lawyers, some firms have turned to retention bonuses to entice associates to stay — splitting payments so that workers get one in the spring and another in the fall, or even in 2022. “It’s just about keeping associates at the firm,” said Joshua Holt, a former Goodwin Procter associate and founder of Biglaw Investor. “I think it has a huge impact on retention,” Holt said.

And it’s not just money being used to keep workers happy.

DLA Piper, a global law firm with offices in more than 40 countries, offered its lawyers a “one-week thank you,” allowing them to choose between one week’s extra pay or a further week of holiday.

“Throughout the pandemic our people have been exceptional,” said Simon Levine, DLA Piper’s global co-CEO. “The extra week’s pay or holiday is just one small way of us saying thank you to them for everything they have achieved in such a challenging year.”

“It is a big problem when very talented people are saying I won’t do this for all the tea in China,” said Zuklie. “You have to listen and think about it and take that seriously.”

Other Big Law firms have begun experimenting with solutions to help their associates outside of just pure cash. Dentons and Baker McKenzie have both experimented with no meetings days, while Davis Polk is offering its associates luxury gifts as a reward for their work.

“It’s about sustaining top performance,” Zuklie said. “I think if we don’t get that right Big Law could really face an existential crisis and we could lose the talent that we’re working so hard to identify and attract, to train and to advance.”

One attorney who left a position doing securities work for a big law firm last year and went to a smaller firm was able to do that while matching compensation — not including bonus — while working more manageable hours doing more varied work.

The associate resigned after billing 13- and 14-hour days, multiple days in a row. “At that point I just did not care about the prestige anymore. I was having such bad days and nights where I just felt like I wasn’t being treated as a human,” said the associate, who asked not to be named to preserve relationships.

“We all know what we signed up for, but you can’t work 7 days a week, nonstop.”

To contact the author of this story:
in Arlington at mtribe7@bloomberg.net

To contact the editor responsible for this story:
at tinadavis@bloomberg.net