Seth Kretzer achieved a doubly rare feat when he convinced the U.S. Supreme Court not only to halt his client’s execution but also to grant full briefing and oral argument.

The catch is that the court set the argument for less than two months after granting the September stay, expediting the appeal and prompting an unexpected trip to Washington for the Houston solo practitioner, who’ll argue for death-row prisoner John Ramirez on Tuesday.

The court surprised Kretzer again late last month when it delayed the argument by a week, to make way for the even-more-expedited Texas abortion dispute.

“I was all ready to go,” he said in an interview. “But like my grandmother used to say in Yiddish: We make plans and God laughs.”

Religion, as it happens, is the subject of the appeal. Ramirez wants his pastor to pray aloud and lay hands on him in the death chamber when he’s executed for the 2004 Corpus Christi killing of Pablo Castro. Texas officials object, claiming security concerns in the case that raises the question of what last rites are owed the condemned.

“How many times can a lawyer say they’re on the side of God?” Kretzer asked, noting another oddity of the appeal.

It’s the second Supreme Court outing for the former federal appellate and trial court clerk. He argued another Texas capital case in 2017, Davila v. Davis. The state won that one 5-4, in a procedural dispute over ineffective assistance of counsel.

There’s reason to think Kretzer is better-positioned to win this round, despite the high-court majority taking an even stricter stance toward death-row appeals since the arrival of Justices Brett Kavanaugh and Amy Coney Barrett. That’s because it’s a religion case at a court generally solicitous of faith-based claims. Plus, clarifying execution rules can help states like Texas speed them up.

Ramirez also has considerable outside support. Religious-liberty groups and former prison officials are among the myriad organizations backing the prisoner across nearly a dozen amicus briefs. They argue the state doesn’t need to stifle spiritual practice to carry out executions.

The case is “bringing America together,” Kretzer said of the amicus support.

Arguing for Texas is state Solicitor General Judd Stone, who made his debut last week in the abortion cases. 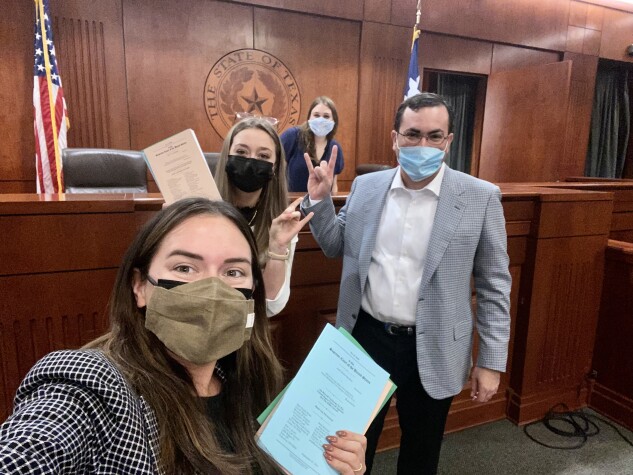 Kretzer is quick to applaud the rapid assistance he received from the Supreme Court Clinic at the University of Texas at Austin School of Law. A UT alum himself, Kretzer said there was no one else he wanted to partner with.

“They are fantastic and all of the students there did yeoman’s work,” he said.

Clinic co-director Lisa Eskow said the compressed timeline “was challenging but thankfully it was doable.” The clinic mooted Kretzer and took the lead on drafting the brief that was due just weeks after the late-night stay in September.

“It was a whirlwind experience,” said Eskow, who was previously deputy solicitor general for Texas and practiced in the Supreme Court and appellate group at Weil, Gotshal & Manges.

“I have not worked on anything that moved this quickly at the Supreme Court,” she said. “For the students, most people in their whole lifetime of legal practice don’t get to work on merits cases at the Supreme Court, and they’re not even out of law school yet. And they got thrown into one that also made headlines around the country and had this compressed schedule.”

Though Covid-19 protocols keep him from bringing clinic students to the argument, Kretzer said he likes seeing the clinic on the brief. “It gives me a little bit of comfort as I walk into that courthouse all by myself,” he said.