The SPAC market went to the moon last year, as blank-check companies raised a record of more than $160 billion and reaped windfalls for a long list of Big Law firms.

The process of using special purpose acquisition companies to purchase private concerns and take them public in 2021 brought in double the dollar amount that SPACS raised in 2020, according to data compiled by Bloomberg.

Big Law firms flocked to the market. Many hired lawyers with experience in SPACS and marketed their capabilities.

At White & Case, SPAC work is important and the firm prioritizes it, said Joel Rubinstein, a partner who’s been involved in the specialty since the mid-2000s. But with lawyers expecting the SPAC market to cool off in 2022, several firms may be in for a rude awakening, he said.

“Some of the firms that got business because of the stretch will not necessarily get that,” he said, “because they don’t have the deep and long experience you really need to do a great job on these.”

Other firms that benefited from the SPAC boom include Weil Gotshal & Manges, Latham & Watkins, and Paul Hastings, Bloomberg data show. Boutique firm Maples and Calder, which aided a higher dollar amount of deals than all rivals, handled local legal work for SPACs registered in the Cayman Islands.

Lawyers who advise blank-check companies cite regulatory scrutiny and poor trading performance of newly-listed SPACs as reasons the market will cool in 2022. That could push some law firms out of the market and slow the spigot of fees firms have racked up last year when SPACs took off.

The SPAC IPO market has already dwindled from the heights it reached in the first quarter of 2021, when more than 300 deals were completed—surpassing the entire previous year’s activity, Bloomberg data show.

Still, the pace of SPAC IPOs ticked higher toward the end of last year. With more than 60 priced each month from October to December, the market is still well ahead of where it was before the 2020 boom.

“It’s fair to say that last year is not going to be reached,” Rubinstein said.

The U.S. Securities and Exchange Commission has issued numerous alerts stoking caution around the red-hot SPAC market, including advising “it is never a good idea to invest in a SPAC just because someone famous sponsors or invests in it.”

Celebrities such as Shaquille O’Neal, Jay-Z, and Alex Rodriguez have been associated with investing or sponsoring SPACs.

The SEC has also warned about how targets of SPAC mergers project their future business prospects, noting they’d be on “shaky ground” if they only disclosed favorable projections.

“Regulatory is not going to be a friend of the SPAC market this year,” said Michael Zeidel, head of the capital markets practice in the Americas for Skadden. “But people are on high alert to deal with it.” 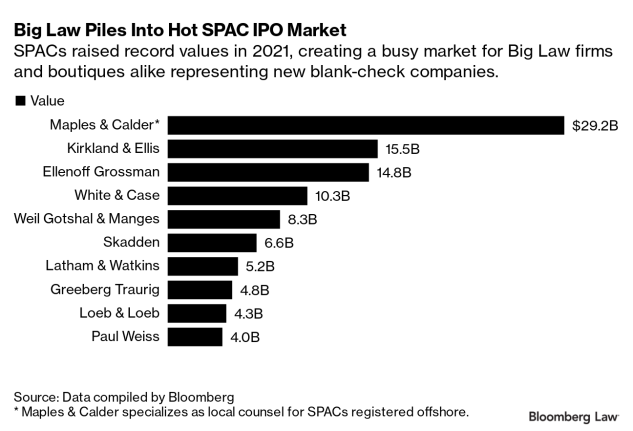 The SPAC IPO market took its biggest hit in April, when the SEC warned about how SPACs account for the warrants they issue allowing investors to purchase additional shares at a set price. That caused hundreds of SPACs to issue financial restatements.

A consortium of more than 60 major law firms jumped to defend SPACs in August after civil lawsuits filed by a pair of law professors claimed SPACs violated the Investment Company Act of 1940 by not registering as “investment companies,” a regulation that typically covers funds that invest in securities or other assets. The law firms signed a letter stating the lawsuits were “without factual or legal basis.”

Public markets haven’t been kind to SPACs after they complete mergers. Bloomberg News reported in November that SPAC shares had fallen nearly 10% on average from the date they completed a merger.

Underperformance is a critique that applied to the broader IPO market in 2021. More than half of the year’s 480-plus U.S. IPOs traded below their offer prices as of late December, Bloomberg reported.

While lawyers aren’t responsible for how shares trade, they are concerned that continued under-performance could dampen the SPAC market.

Some lawyers said target companies would need to lower the valuations they expect to achieve in de-SPAC transactions, leaving more room for their shares to appreciate on public markets.

“At the end of the day investors are only coming in if they think there is long-term appreciation in the stock,” White & Case’s Rubinstein said. “If as a whole you see these deals are not performing well it will definitely put a damper on it.” 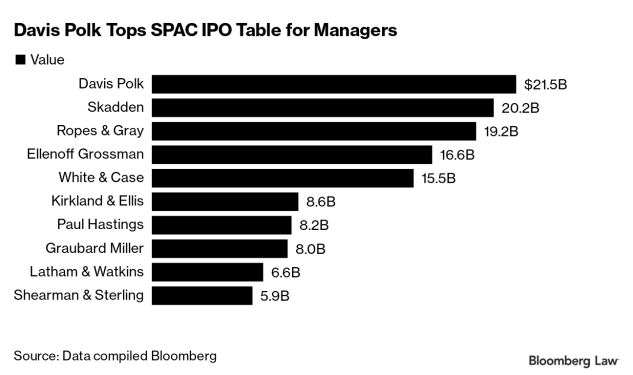 Douglas Ellenoff, who pioneered the SPAC practice at his boutique Ellenoff Grossman, said SPACs have recently been unfairly critiqued for their performance compared to traditional IPOs. He views the SPAC boom as a success for encouraging more companies to enter public markets.

“For 30 years we did not incubate enough private companies wanting to go public, and in the last two years, thanks to the SPAC market, we have,” he said. “There’s almost 300 companies willing to assume the duties and responsibilities of being public. I sleep well every night knowing I’m helping that pathway to be opened up.”

While Ellenoff defended SPACs as “not a back-alley practice,” he said some large law firms that recently began working in the SPAC practice may step away from it as regulatory concerns swirl.

“Large firms are understandably concerned by the potential regulatory stigma that is associated with practicing in this area since the SEC, Congress, and investor advocates have not been shy in their criticism of the program,” Ellenoff said. “For some who have a passing involvement, they may revisit their engagement in the space.”

(Adds context on current SPAC IPO pace in 10th paragraph. A previous version of this story was corrected to accurately spell Zeidel's name.)