Many Big Law firms touted the diversity of their new partner classes this year, particularly when it came to gender, but an analysis by Bloomberg Law shows a far more mixed picture.

The percentage of women in newly announced partner classes for the top 15 firms on the AmLaw revenue rankings ranged from 21 percent to 53 percent this year, according to the analysis. And in total, the stats showed 38 percent of new partners named in that group of firms were women.

Bloomberg Law crunched numbers from these top revenue firms’ global promotion announcements and reached out to the firms to assemble a comprehensive look at gender diversity in new partner classes publicized this year.

Morgan Lewis stood out as the top promoter of female attorneys in the group, with 16 new women partners out of 30 total.

“We believe in fostering an inclusive environment and in the power diverse teams of partners and other lawyers bring to providing innovative solutions to our clients,” Jami McKeon, chair of Morgan Lewis, said in an emailed statement to Bloomberg Law. “Morgan Lewis’s early adoption of the Mansfield Rule coupled with our affinity groups and other key initiatives such as our Remote Working and Ramp Up programs are all part of our continued investment in and nurturing of diverse talent.”

On the other end of the spectrum was Skadden, which tapped three women for partner this year out of a total of 14 promoted attorneys. 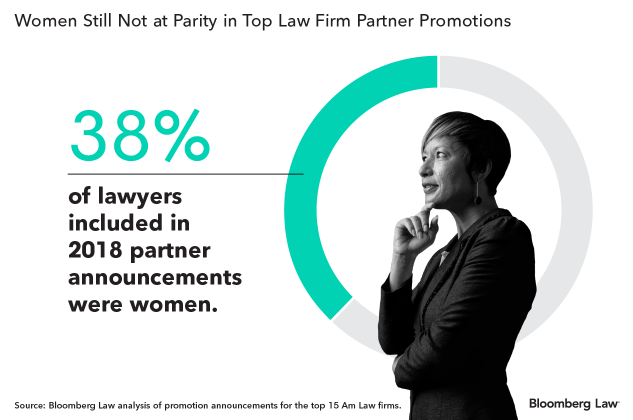 The cohort of top revenue firms in Bloomberg Law’s analysis named partner classes slightly less gender diverse than the classes named this year across Big Law more broadly. According to the Diversity and Flexibility Alliance, roughly 39 percent of Big Law attorneys promoted to partner in 2018 were women. When the alliance began tracking this data in 2012, approximately 33 percent of these new partners were women.

“There is a slight uptick,” said Jean Lee, president of the MCCA, which tracks demographic data across the legal industry. “If you look at the AmLaw 100, the numbers really haven’t changed that much in the last five years.”

Lee cautioned against looking at any given year in isolation as a measure of a firm’s progress towards inclusion. For example, when firms do well, they tend to advertise their numbers more boldly.

“There are a lot of firms, their numbers are horrific, but that one year they promote all women they post it on social media” and it looks like the firm is doing well, Lee told Bloomberg Law. In the same vein, firms that may have robust diversity programs may face heat for one bad year, she said.

Earlier this month, Paul Weiss received public blowback after publishing a LinkedIn post with photos of its new partner class, the vast majority of which is white and male. The law firm has since removed the post.

“It was just so blatant, because not only was it all white men, but they put the one woman in the corner,” Lee said. “But I know lots of partners at this firm, and I know the efforts they’re trying to make. I quickly pulled up the partnership data, and in fact their numbers are much better than the national average.”

In a statement emailed to Bloomberg Law, Paul Weiss chairman Brad Karp touted the firm’s promotion of diverse attorneys while adding, “I regret the gender and racial imbalance in our newly elected partnership class.” This year’s class, he explained, “resulted from an idiosyncratic demographic pool … which I can assure you will not be repeated.”

“You certainly have to recognize firms that have done well this year, but at the same time it’s not indicative that this firm has solved it and will have diverse classes year over year,” he told Bloomberg Law.

It’s also important to note that women of color remain underrepresented, making up only 2 percent of the equity partnership ranks, according to NAWL. And across Big Law firms, the total number of black women in the equity partnership ranks has actually decreased in past years, Lee said. Bloomberg Law’s analysis of the top 15 firms only included a breakdown by gender, not by race, ethnicity, or other identity.

A brief note on Bloomberg Law’s analysis: The data include both equity and non-equity partners. Since firms reveal their new partner classes on different timelines, this analysis is limited to promotions announced in calendar year 2018. Some of those partnership decisions were originally made in 2017, and some will not go into effect until 2019. The majority of firms were able to confirm that their announcements were global and included all partner tracks.

One firm in the group of the top 15, Sullivan and Cromwell, was not counted in the analysis as the firm did not provide a copy of its 2018 partner class announcement or make one accessible online. The firm did not respond to multiple calls and emails requesting data about the partner class broken down by gender.