Some of the country’s biggest law firms early in the coronavirus pandemic rushed to cut pay and trim staff, fearing an economic storm ahead. More than half a year later, many are faring better than expected.

Nearly half of the largest 100 law firms in the country resorted to some combination of pay reductions and delays, furloughs, or layoffs as the pandemic swept the U.S. Now 27 of those 48 firms have restored pay in part or completely, according to a Bloomberg Law analysis.

A handful of the most profitable firms have even given out “pandemic bonuses” of up to $40,000 a piece for associates.

The moves are a sign that many Big Law firms have successfully managed the pandemic, at least so far. Firms with strong practices in areas like bankruptcy and segments of capital markets have leaned on those areas for revenue during the economic downturn, while others have trimmed overhead elsewhere.

Industry leaders braced early in the pandemic for a 20 to 40% revenue decline, according to Thomas Clay a consultant at Altman Weil, who works closely with large law firms. Many have seen just a 5% to 10% dip, with variations depending on practice areas, Clay said.

More firms are already planning to scale back cuts. K&L Gates said it will fully restore pay for partners, attorneys, and staff on Oct. 16, while Mintz, Levin, Cohn, Ferris, Glovsky, and Popeo’s rollbacks will take effect starting with its Oct. 23 payroll. Baker McKenzie said its salary reductions for attorneys and staff will end on Dec. 31.

Still, not everyone is in the clear.

“I’m not saying the triage is over, but basically they’ve weathered the storm to a degree that they can operate and sit down and now plan proactively rather than just reacting to the crisis,” Clay said.

‘Keep the Lights On’

Many firms were quick to make cuts early in the spring to ensure they “literally had enough money to keep the lights on,” said Marcie Borgal Shunk, president and founder of legal consulting firm The Tilt Institute.

“I think there’s been a step back to say okay, we see what the uncertainty is, we have a little bit more of a better understanding these days and that is allowing us to come back to where we were,” she said.

Many firms have found ways to curb losses by finding new sources of revenue and slashing costs.

A few, like Boies Schiller Flexner received federal Paycheck Protection Plan loans. Some firms have also benefitted from strong practices in counter cyclical practice areas like bankruptcy and the debt issuance side of capital markets , where business has boomed. 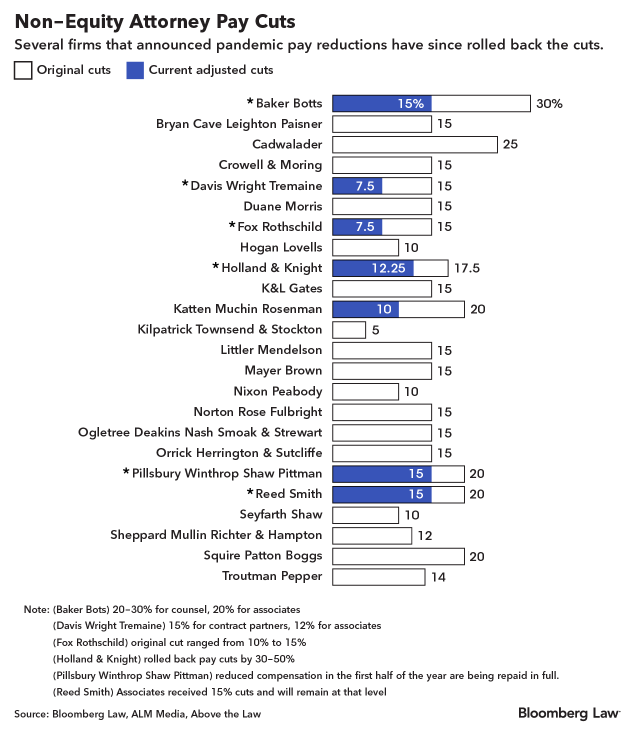 Clay estimated many Big Law firms spent roughly 30% to 35% less than they would have on travel, events, marketing, and other business development expenses as an additional buffer against the virus’ economic effects.

Of the 27 firms that have already eliminated or rolled back pay cuts or furloughs earlier this year, many cited better than expected business outcomes in 2020 as the reason for the move.

Another possible motive: the need to retain star attorneys and attract new talent. Reversing pay cuts signals that a firm is still a lucrative and attractive place to work, for both current lawyers and potential lateral hires.

“These savvy firms in the market realize that the war for talent is going on with or without Covid, so if you have a good team its really important to hold on tight to them and remain competitive in the market so that when you’re looking to fill really select positions that are in high demand you can do it,” said Mary Rosenfeld D’Eramo, vice president of operations at legal recruiter Mestel & Company.

Moves to return pay to market level, along with the special pandemic bonuses that firms like Cooley, Wilkie Farr & Gallagher and Davis Polk & Wardwell have offered to thank attorneys for their work, can help firms retain their talent, Rosenfeld D’Eramo said.

The other 15 firms that haven’t yet said they are rolling back pay cuts face a less certain future.

“If a firm is still at the point where they’re continuing or maintaining wage cuts, we think there must be some concern there,” said Jeffrey Lowe, global practice leader of the law firm practice at Major Lindsey & Africa.

Most of the firms that haven’t yet rolled back their cuts are clustered in the lower half of the AmLaw 100, with profit margins ranging from 20% to 40%, according to Bloomberg Law’s analysis. All but two firms reported revenue per lawyer figures less than $1 million in 2019, according to Am Law data.

Nearly 20 law firms have cut payrolls by eliminating jobs. The layoffs have hit staff more often than lawyers, as the shift to working from home reduced the need for certain office support work.

Davis Wright Tremaine managing partner Jeff Gray said the firm “made the difficult decision” to lay off some of the 8% of its furloughed staff, “not knowing when, if ever, their previous work will return.”

“Needs of firms are different now than when we started 2020,” Rosenfeld D’Eramo said. 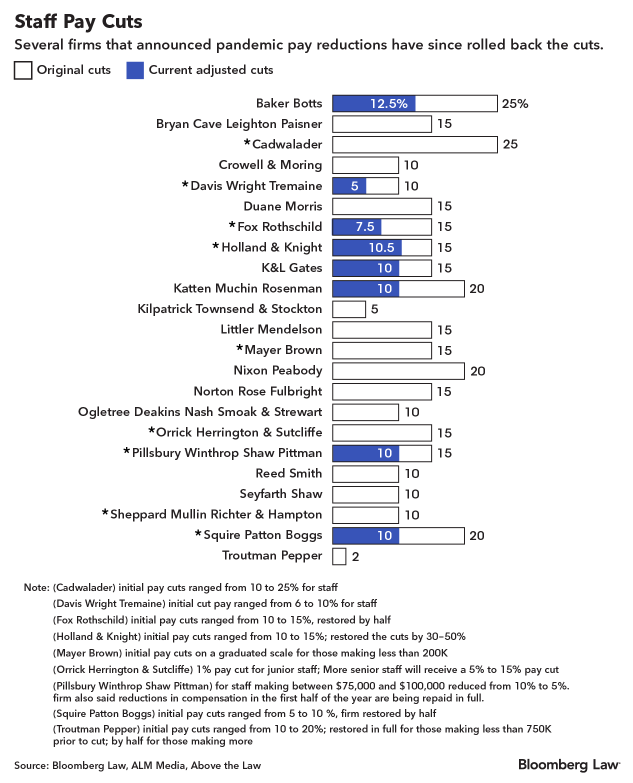 Winston & Strawn in September announced it was shifting certain work to a Winston Resource Center, a group providing lawyers and clients support services that “addresses evolving work practices while improving operating efficiencies.” The firm said the move involved the elimination of some employee roles.

The economic downturn caused by the coronavirus crisis also may have sped up changes like these that have been on the horizon since before the pandemic. Law firms were already moving towards having less administrative support staff and finding ways to leverage technology and moving underperforming partners out of partnership, Borgal Shunk said.

“When the markets were strong and firms were gaining revenue year over year, it was easy to defer those decisions,” she said. “Given that’s no longer the case, the impetus to make those decisions and be a little bit more stringent with respect to those decisions is here.”

A searchable chart of law firm cuts and other moves is available at https://news.bloomberglaw.com/business-and-practice.