The coronavirus pandemic’s devastating effects on large company balance sheets are paying off for law firms, which made nearly $235 million so far this year on work leading up to the biggest bankruptcy cases.

That’s nearly double the amount of cash that firms hauled in for the same type of work in all of 2019.

Through June, 33 publicly traded companies with more than $100 million in assets each had sought court relief from creditors, according to a UCLA Law School database.

Those companies paid more than $235 million in fees to law firms either in the form of retainers or during the 90-day period before a bankruptcy petition, court records show. Only $120 million was paid all of last year in 25 filings, according to the UCLA-LoPucki Bankruptcy Research Database and a Bloomberg Law analysis of court records.

The number of bankruptcy filings matching the UCLA database’s standards was nine in June compared to 12 in May, which set a post-2009 record. During more normal years, some months see no filings.

But bankruptcy lawyers are preparing for a prolonged period of heightened activity, especially if rising coronavirus infections lead to a second round of business closures and stay-at-home orders.

“Some of the businesses that have been managed to stay out of Chapter 11 up until now, it is very unclear if they could survive another major hit to their revenue and liquidity that comes with sheltering at home for a few months in the fall,” George Davis, chair of Latham & Watkins’ 215-lawyer restructuring and special situations practice, said in an interview.

Kirkland & Ellis, has dominated the competition this year for work in bankruptcies filed by large public companies. The Chicago-founded firm has represented 15 of the 33 companies, earning more than $145 million in fees for its work prior to those companies’ bankruptcy filings. That represents more than 60% of fees paid to law firms by the 33 companies, according to the Bloomberg Law analysis.

The firm, which declined comment on its bankruptcy work, has represented retailers , , and . It has advised firms in the energy business including , Covia Holdings, and . Kirkland is representing eight of the 10 largest publicly-traded bankrupt companies by assets this year, the UCLA database shows. 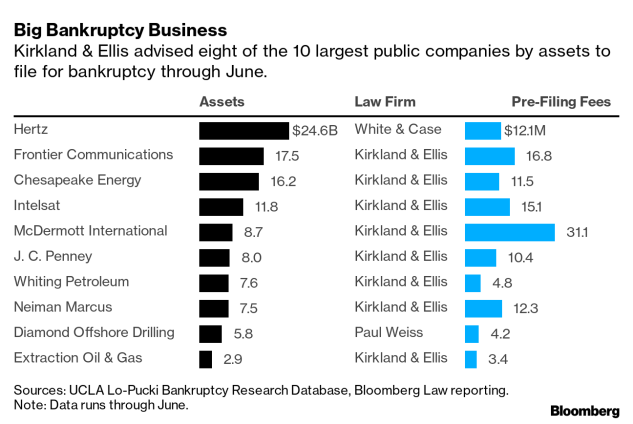 The data compiled by Bloomberg Law has some limitations as a tool to compare law firm fees. There is no standard format to report pre-petition bankruptcy fees, and firms take varying approaches to billing during that period.

The majority of the fees tracked by Bloomberg Law were in the form of retainers, which firms draw from as they work on matters. The other fees were payments firms said they received within the 90-day period leading up to the bankruptcy filing. Still, the data offers insight into what is often one of the most lucrative aspects of bankruptcy work for lawyers: representing bankrupt companies in court.

And while a handful of law firms hold a tight grip on that practice, other Big Law firms had invested in restructuring practices as a hedge in recession. Many of those lawyers are busy representing creditors, financial institutions, or smaller indebted companies.

Lynn LoPucki, a UCLA School of Law professor who developed the database, said the best predictor for how much money a company will pay its law firm during a bankruptcy is how many professionals are authorized to work on the case. The amount of assets is a “strong second,” he said.

Pre-petition law firm fees are nearly twice as high so far this year while the total assets involved in the bankruptcies is fairly similar to last year’s level. The 33 bankruptcies through June were filed by companies with a combined $141 billion in assets, compared to about $135 billion last year, the UCLA database shows.

LoPucki said last month the number of bankruptcies stemming from the pandemic could exceed the records set following the dot-com crash and the 2008-09 financial crisis. 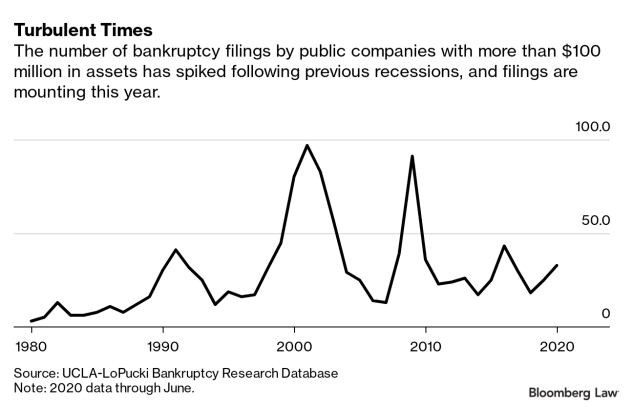 Smaller and private companies are also filing for bankruptcy protection as the coronavirus pandemic rages.

A separate tally compiled by Bloomberg of bankruptcies filed by companies with more than $50 million in assets showed 28 companies sought court relief from creditors in June, the same number as May. The bankruptcies in June generated more than $85 million in pre-filing payments to law firms, court records show.