Law firms of varied sizes saw revenue and demand increase in the first nine months of this year, with the largest players seeing the biggest gains, according to a Wells Fargo survey.

Law firms responding to the survey reported a 14.3% average jump in revenue, the bank said Monday. That’s more than double the 5.7% increase reported in 2020 and the 6.3% uptick in 2019, said Joe Mendola, senior director of sales for Wells Fargo Private Bank Legal Specialty Group.

“Firms continue to benefit from this ‘best of all worlds’ environment with almost everything going right: growth in demand, rates, and productivity – each up 6% or more, against generally easy comparisons a year ago,” Wells Fargo said in the report.

More than 120 firms, including 64 ranked in the Am Law 100, participated in the survey. Regional firms and those the Am Law 200 also responded. 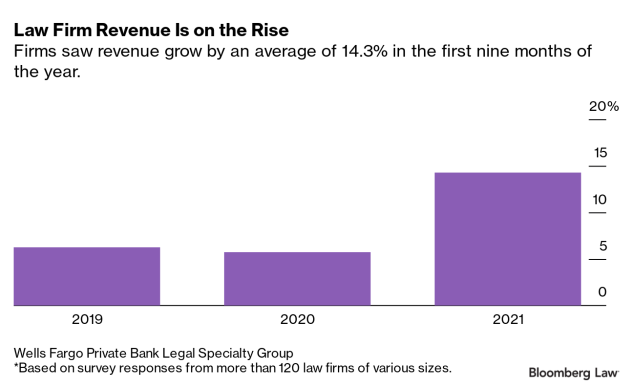 Overall, more than 90% of firms reported increased revenue. The largest firms did the best, with revenue growing 17% at the Top 50 firms compared to a 10% increase for others.

The survey is the latest sign of a lucrative year for law firms, particularly those among the largest in the country.

Paul, Weiss, Rifkind, Wharton & Garrison Chairman Brad Karp told Bloomberg Law in October that the firm is on track to grow its revenue by more than $250 million, with profits per partner expected to surpass $6 million. The firm’s noticeable gains in 2021 echoed a near 19% revenue increase last year.

Paul Weiss’ demand has grown nearly 20% this year, Karp said. Along with other major firms, it saw a significant uptick in deal activity and transactional work.

Baker McKenzie said in October it had 30% growth in its private equity transactions group in the first six months of 2021. The firm said its global revenues rose 7.8% to $3.1 billion over the same period.

Mendola said transactional work was a major driver of increased revenues. He also noted that litigation, which had been difficult to see to conclusion in 2020 when the coronavirus pandemic closed courts, and real estate deals had also been revived.

Firms based in California, New York, and the Northeast area showed the strongest gains overall, because many top national firms are concentrated there. That contrasted with firms based in the Great Lakes and the Southwest, primarily Texas, which showed the lowest growth.

“For Texas, the deep freeze in February stalled business, while firms from outside the region continue to expand their presence in the state, poaching local firms’ lawyers and clients who traditionally were bound to homegrown firms,” the report found.

Overall lawyer count in the participating law firms increased 0.6%, compared to a slight decrease in the first six months of 2021. Revenue per lawyer increased nearly 14%—up from 4% last year—boosted by strong increases in lawyer productivity (6%) and standard billing rates (6%).

The much-discussed associate salary increases—hiking starting lawyer salaries to $205,000—announced by many large firms earlier this year started to make an impact in the third quarter of 2021, the report found.

Mendola said he expects firms to continue the pace in the final three months of 2021. One uncertainty is collecting outstanding client bills, he noted.