Welcome back to the Big Law Business column on the changing legal marketplace written by me, Roy Strom. Today, we look at how population changes differed between Big Law firms and the rest of the country. Sign up to receive this column in your inbox on Thursday mornings.

Growing up in Denver, Jon Van Gorp remembers family vacations to Salt Lake City, where he’d float in the lake and relax in the low-key city.

Now when the Mayer Brown chair visits, he sees a Ferrari dealership across the street from his hotel. “I don’t remember that when I was going there as a kid,” he said. “It’s definitely a changing market.”

Those changes are “something we want to get in on at the front end,” Van Gorp said, so Mayer Brown in January opened an office in the city.

Six AmLaw 100 firms have opened offices in town since 2020. One of those, Mayer Brown, also did so in January and now has 17 lawyers in Salt Lake City.

In total, there are 14 AmLaw 100 firms in the market, employing 240 lawyers, according to Firm Prospects, a law firm and attorney analytics company, and Bloomberg Law reporting. That number nearly doubled in slightly more than a year.

The growth tracks with U.S. Census Bureau data showing Utah was one of the fastest growing states last year.

AmLaw 100 rosters proved to be resilient in those population-losing cities, however.

Headcount in New York, the biggest AmLaw 100 market, increased 2.3% last year to more than 21,000 lawyers, according to Firm Prospects.

Chicago saw the largest percentage increase among the four cities, growing by 4.3%, Firm Prospects says. San Francisco was the biggest decliner, losing 3.4% of its AmLaw 100 lawyers.

“2021 was really a reshuffling of top-tier attorneys more than anything else,” said Adam Oliver, CEO and co-founder of Firm Prospects. 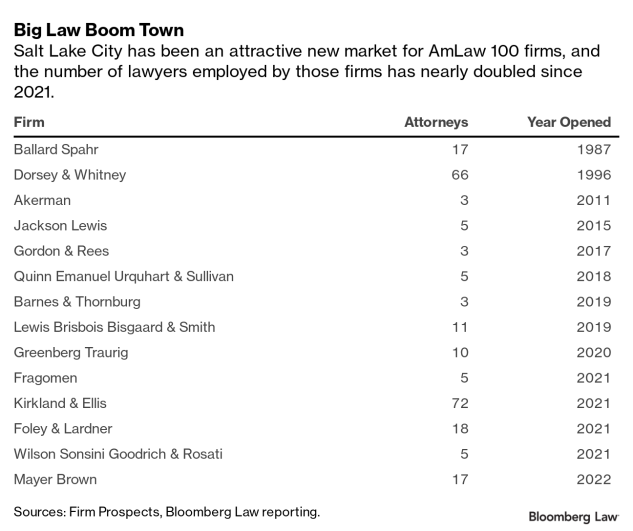 Big Law firms are often viewed as slow to change, especially geographically. New offices are expensive. The old markets are the most lucrative.

But law leaders’ traditional cost-saving instincts are running up against another characteristic of the business: Firms follows the money. Legal work flows from the movement of capital and broader economic growth.

That’s what attracted Van Gorp to Salt Lake City. He sees it as a young market attracting engineers and venture capitalists who are eager to put money to work in the “Silicon Slopes.”

Mayer Brown has already advised Salt Lake clients across its global offices in the U.K., Brazil, and Singapore, he said.

“A lot of the founders of these companies, and the investors who invest in these companies, are ex-pats from Silicon Valley who were attracted to Utah for a whole variety of reasons,” Van Gorp said, noting the lifestyle and lack of state income tax. “We think it will just continue to grow, and we can grow with them.”

Salt Lake City isn’t going to supplant New York or Chicago in Big Law importance any time soon. But firms’ moves to the area show they’re responding to population and business trends faster than they’re often given credit for.

On Big Law Diversity: Lawyers of color who spoke to my colleague Ayanna Alexander said they felt they were judged solely on their merits during remote work and fear that could disappear as they return to the office.

On In-House Diversity: The Coca-Cola Co. has officially walked away from race-based staffing requirements for law firms doing work for the company, Brian Baxter reports. A policy announced by former Coca-Cola general counsel Bradley Gayton that would have required law firms to staff at least 30% of new matters with diverse attorneys was never implemented and are not a policy, current general counsel Monica Howard Douglas said in a letter to Coca-Cola shareholders.