Law firm political action committee donations to Republicans have caught up with those for Democrats this year as the GOP was poised to take control of the US House in Tuesday’s midterm election.

The PACs, funded through employee contributions, gave roughly equal amounts to each party in 2022 after favoring Democrats 60% to 40% last year, according to the nonprofit Center for Responsive Politics.

As of Oct. 28, the PACs collectively gave about $7.5 million to individual candidates this two-year election cycle, with 55% going to Democrats and 45% to Republicans, according to the center, which tracks spending at OpenSecrets.org.

Among all corporate PACs—not just those of law firms—Republicans took in about 60% of donations this year, said Andrew Mayersohn, an OpenSecrets committees researcher. That may be a reflection of the challenging political environment Democrats are facing, he said.

Republicans were in a position to take control of the House, according to a Washington Post -ABC News poll taken from Oct. 3 to Nov. 2. Republican-leaning voters were more certain about about voting than Democrats, 80% to 74%, according to the poll of 881, with an error margin of +/- 4 percentage points.

Key Senate races, including Republican Herschel Walker and Democrat Raphael Warnock in Georgia, and Republican Mehmet Oz and Democrat John Fetterman in Pennsylvania, will determine which party controls that body. 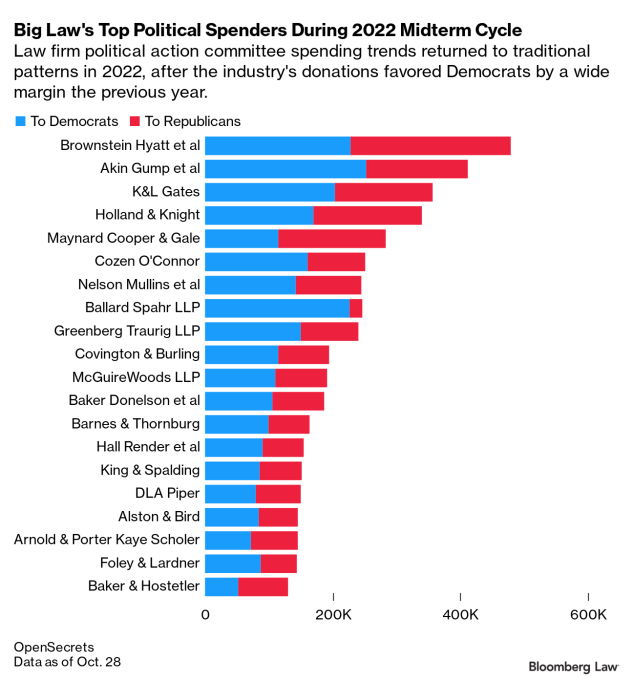 “If they are successful in helping candidates whose positions are sympathetic to the needs of their clients, then it makes their jobs much easier,” said Burns.

Corporations “have to give on a bipartisan basis” as a practical matter, said Ki Hong, who leads the political law group at Skadden, Arps, Slate, Meagher & Flom and is a corporate PAC adviser. “You don’t know which party will be in power, and regardless of who’s in power, you do not want to alienate the minority party.”

While corporate PACs leaned Republican this year, their money was evenly divided between the parties in 2021, according to OpenSecrets.

The firms that gave the most PAC donations during the 2022 cycle are those with big lobbying shops in Washington.

Brownstein Hyatt, Akin Gump Strauss Hauer & Feld, Holland & Knight and K&L Gates, which ranked as the top law firm PACs in terms of donations this cycle, also have some of the biggest federal public policy practices.

Brownstein Hyatt, which is on pace to earn the most revenue of any D.C. lobbying firm this year, has assessed donations on a case-by-case basis, said Marc Lampkin, leader of the firm’s lobbying practice.

“Our general philosophy is that using our PAC is important to maintain and build relationships on a bipartisan basis with folks on the Hill,” said Lampkin. “One of the ways to meet members and understand their positions is through fundraising receptions.”

One possible explanation for the growth in GOP donations this year from corporate PACs is the end of contribution freezes that were put in place after the Jan. 6 attack at the U.S. Capitol, Mayersohn said.

Cozen O’Connor, among the 100 biggest firms in the country, in August and September made separate donations to four House Republicans who voted against certifying the 2020 presidential election, after previously stating that it would halt donations to all 147 GOP lawmakers that took that step. It’s a step various businesses and law firms took over the past two years.

Holland & Knight and Squire Patton Boggs, each of which have big lobbying practices in Washington, were among businesses that continued making donations to Republican objectors after implementing temporary pauses. Squire Patton’s spending freeze lasted through all of 2021.

Cozen O’Connor, which has directed a strong majority of its contributions this cycle to individual Democratic candidates, did not respond to a request for comment.

While its spending fell during this past cycle, Squire Patton launched a reconstituted PAC in April with plans to give at least $1 million per election, a goal that would make it the largest PAC in the legal industry by far.

The firm’s PAC board now includes four partners based outside Washington, lobbying practice leader Ed Newberry said. Squire is trying to dedicate more time to fundraising and engaging with clients and candidates beyond the Beltway, he added.

Asked whether the firm considered any new policies around social issues or withholding donations to Republicans that voted to overturn the election, Newberry said, “that’s not a basis for making contributions from our PAC.”

“There’s no litmus test,” Newberry said. “It’s a much more strategic approach focused on our clients needs and ability to solve client problems.”

— With reporting by Ian Fisher