A pedestrian wearing a protective mask passes a Neiman Marcus Group Inc. store in Chicago on May 7, 2020. The company is one of several large debtors represented by Kirkland & Ellis in recent bankruptcy filings.
Christopher Dilts/Bloomberg

Kirkland & Ellis has brought in nearly $100 million this year representing distressed retailers and other large, public companies in a rash of mostly pandemic-related bankruptcies.

The Chicago-founded firm is among those who have spent recent years investing in their counter-cyclical bankruptcy practice. Those practices are now in high demand as businesses seek bankruptcy protection in the wake of the coronavirus pandemic and ensuing economic shutdowns.

Early results show Big Law competitors have so far been unable to topple Kirkland for what are often the most lucrative bankruptcy assignments: representing large, indebted companies negotiating a reprieve from creditors. Kirkland’s clientele includes brand name retailers such as , , , and Stage Stores.

“There’s a widely held perception that Kirkland has one of the best restructuring practices in the world,” said Kent Zimmermann, a consultant for law firms at the Zeughauser Group. “It’s another example of how it can really pay off to pick your spots and be among the best in chosen areas of focus. That’s what you’re seeing at Kirkland.”

There were 12 large, public companies with more than $100 million in assets that filed bankruptcy in May, according to a UCLA database. That was the most filings in any month since March 2009. Kirkland advised on seven of the filings in May.

That helped the firm build a bigger lead for the year. Through May, Kirkland has advised 11 of the 24 debtors fitting the UCLA database profile. No other law firm has represented more than three.

Kirkland has received more than $94 million in payments related to those cases, according to a Bloomberg Law analysis of court dockets. The firm declined to comment for this story.

In total, the law firms advising those companies have reported earning nearly $153 million in the form of retainers or fees in the 90-day period leading up to the bankruptcy filing, according to a Bloomberg Law analysis. That figure does not include court-awarded fees for work during the formal bankruptcy proceeding, a stage in the bankruptcy process most of this year’s cases have yet to reach.

The early figures are far from a total accounting of the Big Law bankruptcy practice. Still, they detail a significant chunk of the market for debtor-side representations, which is often the most lucrative role in a bankruptcy proceeding.

For example, in the bankruptcy proceeding, which concluded in 2019, a judge awarded Kirkland more than $56 million in fees. Kramer Levin, which represented a committee of unsecured creditors, earned more than $15 million. 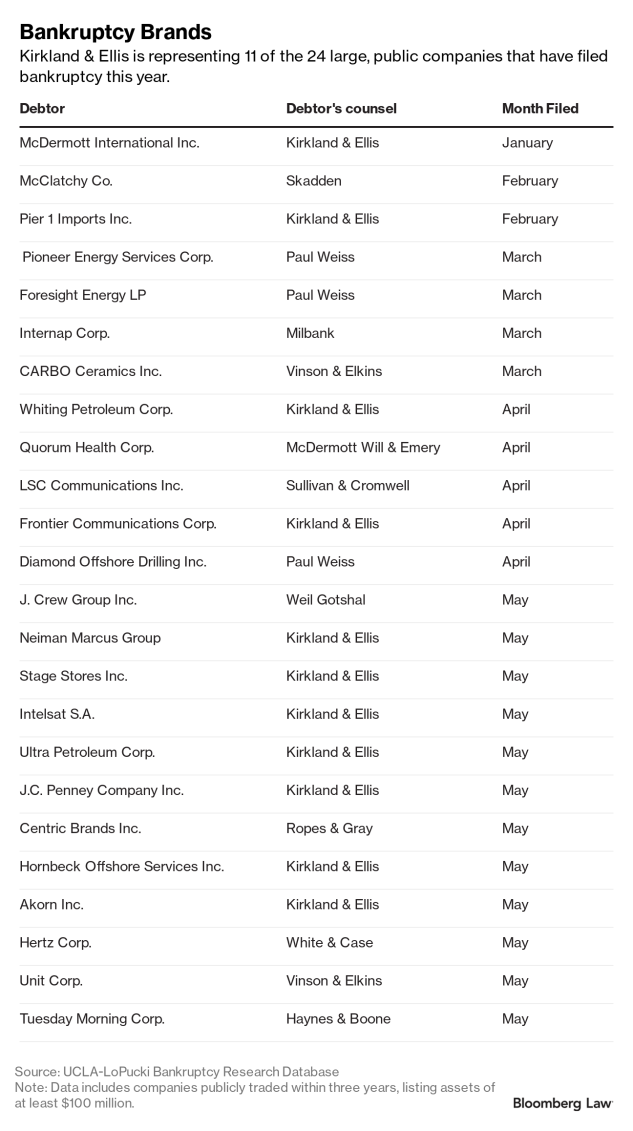 Kirkland has earned more than half of the bankruptcy fees for retail industry companies in the UCLA database as they suffer from shuttered storefronts and a move toward online shopping.

Six large public company retailers have filed bankruptcy this year, reporting having paid their law firms a total of $36 million. Kirkland, which is advising four retailers, has received $23 million in retainer payments on three of those cases. It has not yet disclosed fees earned for its work on behalf of J.C. Penney. Neiman Marcus paid Kirkland more than $14 million in the form of an advanced retainer.

Weil Gotshal, which historically has had one of the most active debtor-side bankruptcy practices, is representing J. Crew’s parent company Chinos Holdings. The firm said it earned nearly $12 million for its work in the three-month period leading up to that filing.

Haynes & Boone, a Texas-based law firm, is representing discount retailer Tuesday Morning Corp. and received a $507,000 retainer shortly before filing the case. The firm said it had been paid about $1.2 million from Tuesday Morning in the year leading up to the bankruptcy.

Paul Weiss is representing three of the 24 major public company debtors: , Foresight Energy LP, and . Partner Paul Basta, who joined Paul Weiss in 2018 from a previous position on Kirkland’s top executive committee, is a lead lawyer on two of those cases.

Kirkland’s $94 million haul is an incomplete count. The firm has not yet reported its early earnings for work on behalf of retailer J.C. Penney or communications satellite provider Intelsat. Vinson & Elkins also has not reported its pre-petition fees or retainer for its work advising , an oil and gas producer. And the firm has no doubt billed more than that figure on these cases, since the pre-petition filings only cover the work leading up to a bankruptcy.

Kirkland is the country’s largest law firm by revenue, bringing in more than $4 billion last year, according to AmLaw rankings. It is also one of the most profitable law firms with its equity partners earning nearly $5.2 million on average last year.

The data compiled by Bloomberg Law has some limitations. There is not a standard format to report pre-petition bankruptcy fees, and firms take varying approaches to billing during that period.

The majority of the fees tracked by Bloomberg were in the form of advanced retainers, which firms draw from as they work on matters. Some firms listed payments they received within the 90-day period leading up to the bankruptcy filing.

It can be difficult to compare firms’ billings because bankruptcy fees are often larger in cases with bigger companies, and some firms request larger retainers than others, said Lynn LoPucki, a UCLA Law School professor who compiles the bankruptcy database.

Kirkland’s retainer payments ranged from $2.4 million in the Stage Stores bankruptcy to $31 million for its work representing , which builds oil platforms and other projects for energy producers.

LoPucki said the billing data is useful to show which firms are getting cash in the door for bankruptcy work.

“I am a strong believer in the principle that in the valley of the blind, the one-eyed man is king,” LoPucki said. “Nobody really knows what is going on with regard to bankruptcy fees.”

There is more certainty, LoPucki said, in the general trend of bankruptcy filings. It is going to surge, he said. 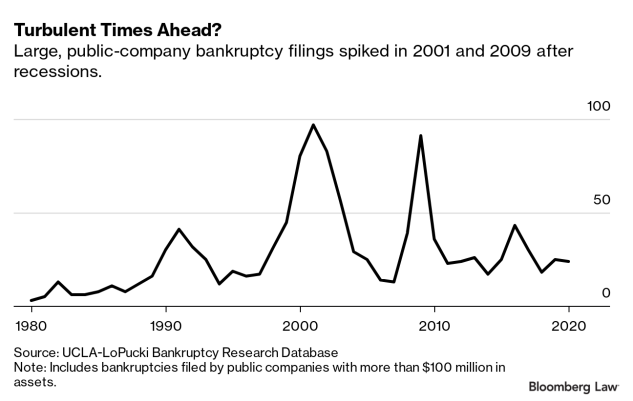 The 12 filings in May doubled the number of filings from January through April. And the 24 filings through five months this year are just one shy of the 25 large public company bankruptcies filed during all of 2019, according to LoPucki’s bankruptcy database.

“This could be larger than either of the two earlier booms,” LoPucki said.