Not content with a life in retirement as a potentially unemployed musician, former Kirkland & Ellis partner and longtime clarinetist and concert producer Jeffrey Gettleman recently returned to the firm as it prepares to handle a deluge of restructuring work due to the coronavirus crisis.

Gettleman retired from Kirkland in December 2018 after more than 16 years working in its bankruptcy and restructuring practice in Chicago.

But it didn’t stick for long. Less than two years after putting court filings behind him in favor of musical compositions, Gettleman again heard Kirkland’s turnaround tune.

In late March, he rejoined the firm as it prepares to face off with Big Law competitors to win millions of dollars worth of work expected to result from a coming avalanche of bankruptcies. Though the decision to return was Gettleman’s own, it likely couldn’t have come at a better time for his firm.

“Our department is extremely busy,” Gettleman, 74, said. “We’ve filed, I can’t even tell you how many cases, since I started.”

“I’ve been involved in music my whole life,” said Gettleman, who has played the clarinet since he was 10. “It was something I was doing no matter what my work life happened to be at the time.”

“It took me 18 years to get that out of my system before I went back again,” he recalled.

In 2002, Gettleman first joined Kirkland, where over the next few months he was staffed on Chapter 11 proceedings for United Airlines. Over the course of his first stint at the Chicago-founded firm, Gettleman handled bankruptcy cases for the likes of W. R. Grace & Co. Inc., J.L. French Automotive Castings Inc., Calpine Corp., Portola Packaging Inc., SIRVA Inc., Flying J Inc., and Corus Bankshares Inc.

Gettleman, a clarinetist in the army, plays in Saigon, Vietnam in 1970 (left). Gettleman gives a pre-performance talk to the audience at one of his chamber music concerts in Chicago in November 2019. (right)
Courtesy of Jeffrey Gettleman

Gettleman wasn’t initially looking to retire, but, by December 2018, he had a few musical projects on tap and little time for them. It was then, he figured, “time to move off in that direction.” He left the role as a knowledge management lawyer in Kirkland’s restructuring group, that he had taken two years before.

One of Gettleman’s first major projects after in his new retirement was “War and the Human Heart,” a concert consisting of music he wrote while commuting from Kirkland’s Chicago office to his home in Valparaiso, Ind. The production honored military veterans and dealt with the theme of war, an important subject to Gettleman, who spent time in Vietnam as a member of the U.S. Army. The composition was performed in 2019 at Valparaiso University, Utah State University, and Chicago’s St. James Cathedral.

“I realized over the course of the year I was retired that I probably retired 10 years too early,” Gettleman said. “I’m not a sit-on-the-rocking-chair-on-the-porch kind of guy.”

Earlier this year, the Covid-19 pandemic canceled his musical plans for the foreseeable future. So he turned back to Kirkland and began discussing a return with the firm.

“I thought with the pandemic and the lockdowns the bankruptcy bar is going to be very busy,” he said.

Bankruptcy filings have typically surged during past recessions. Thirty-nine large public companies filed for bankruptcy in 2008, according to the UCLA-LoPucki Bankruptcy Research Database. By 2009, that number jumped to 91. 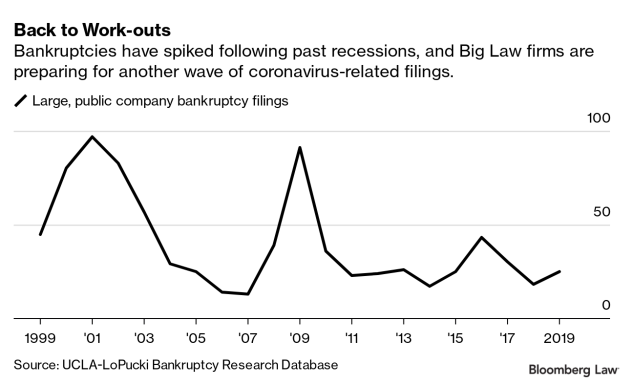 Since rejoining the firm a little over a month ago, Gettleman has been thrust into helping teams working around the clock to meet filing deadlines.

Even though everyone is working remotely, Gettleman said the work processes still run as smoothly as before. But he did anticipate that his role in bankruptcy work this time around would be more supervisory in nature, rather than running large restructuring cases.

For Kirkland’s part, a spokesperson said the firm is “delighted to welcome Jeff back.”

Gettleman isn’t the only Kirkland veteran to return to the firm’s restructuring front lines. David Eaton, who left in 2017 after 26 years at the firm, also came back as a partner in March, said Gettleman.

The market for bankruptcy attorneys has been heating up as the pandemic takes its toll on the U.S. economy.

The firm is also representing department store chain J.C. Penney Co., which filed for Chapter 11 bankruptcy on May 15.

“It’s hard for me to keep up on the cases we’re filing,” Gettleman joked. “The volume has been so great.”

Roy Strom contributed to this report.