The first Black woman justice joins a court that’s on a right-wing rampage. So why would anyone think she can do anything to change the majority’s mind?

I can’t help but wonder if Ketanji Brown Jackson is feeling a bit crestfallen about her new gig.

She’s been on the Supreme Court for less than a month, and we should still be celebrating her elevation as the first Black female justice. But somehow, the party seems over, if it started at all. While there was evident pride and jubilation as she was sworn in by Chief Justice John Roberts, there also was an air of solemnity.

What’s sobering is that Jackson’s new role—while hugely significant from a historical perspective—seems strangely inconsequential at this point.

Fact is, the conservatives (“reactionaries”?) constitute a supermajority on the court, and they are on a tear. In this last term, the court swiftly and aggressively turned back the clock. Gone is a woman’s constitutional right to abortion. Decimated is the Environmental Protection Agency’s power to address climate change. Trampled are states’ rights to enforce gun control. And obliterated are the lines separating church and state.

It’s as if the majority took a machete and lopped off 50 years of progress in one fell swoop.

Obviously contemptuous of public sentiment—61% of Americans say abortion should be legal in all or most cases, and 59% of registered voters favor gun control—the court is on a rampage. So why would anyone think a new and more liberal justice, even one as eminently qualified and likable as Jackson, can change the majority’s mind?

It seems Jackson is the right justice for the wrong time.

“It is somewhat bittersweet to see a Black woman achieve this pinnacle of the legal profession at a time when the Court’s standing with the public is at a low point and many are questioning its institutional legitimacy,” wrote Melissa Murray, professor of law at New York University, in an email.

So what can Jackson possibly achieve besides joining her fellow liberal sisters—Justices Elena Kagan and Sonia Sotomayor—in writing passionate dissents?

Lisa Tucker, a Harvard Law School classmate and friend of the 116th justice, thinks that Jackson’s mere presence on the court carries power.

“We can’t overstate the optics,” said Tucker, a law professor at Drexel University. “Being the first Black woman on the court, and someone who’s above and beyond qualified, I think those things pack a wallop.” 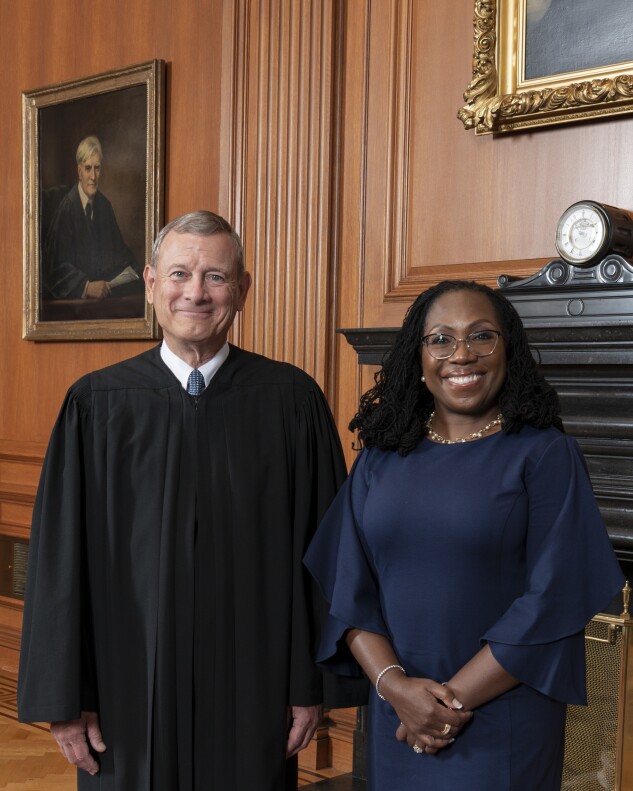 Justice Ketanji Brown Jackson stands with Chief Justice John Roberts shortly after Jackson was sworn in on June 30, 2022.
Photographer: Fred Schilling/Collection of the Supreme Court of the United States via Getty Images

Tucker added that her friend is “amazing,” and that “there’s no doubt that she will blow her colleagues away with her incredible judgment. It’s got to inform the conversation in that room.” (Fun fact: Tucker was so sold on Jackson’s judgment that she sought her stamp of approval for her then boyfriend, now husband: “I took him to Washington, and she gave him the thumbs up.”)

Jackson might have stellar judgment and emotional intelligence to spare—remember how patient she was during her confirmation hearings when Texas Sen. Ted Cruz harangued her about critical race theory with visuals of giant babies in diapers, or when Tennessee Sen. Marsha Blackburn badgered her to define “woman”?—not to mention legal brilliance. But will any of that matter?

We shall see as the court hears hot-button cases during Jackson’s first term on redistricting maps in Alabama, the Clean Air Act, the right of a business to refuse service to gays–not to mention the affirmative action cases.

All eyes will be on Jackson during arguments on an affirmative action case involving the University of North Carolina. (Jackson indicated during her confirmation hearings that she would recuse herself from hearing a similar case involving Harvard University because she had served on its board of overseers.)

On Friday, the court announced that it would hear the North Carolina case separately, clearing the way for Jackson to participate. Though she will likely make compelling arguments to retain affirmative action—perhaps offering a glimpse of how being a Black woman shapes her views—I doubt Jackson will persuade the conservative justices one bit.

We all know how those cases will end: The court will kill affirmative action, OK Alabama’s redistricting map, allow businesses to discriminate against the LGBTQ community, and decimate the Clean Air Act—because that’s part of the extreme right-wing agenda. It’s all hopelessly predictable.

But Jackson could have some victories, according to Murray: “Although Justice Jackson joins a hobbled three-justice liberal minority, there may be some opportunities to find common cause with some of the Court’s conservatives on issues like criminal justice,” she wrote, noting, “Justice [Neil] Gorsuch’s libertarian leanings have led him to join the liberals to cobble together a ‘strange bedfellows’ majority on some key criminal justice issues.”

Indeed, we just saw one of those “strange bedfellows” episodes—albeit in a dissent. In her very first vote, Jackson dissented from a decision not to grant a stay in a case, along with Kagan, Sotomayor, and—can you believe it?—Amy Coney Barrett, in which the majority let stand a Trump-era immigration policy.

But those opportunities “will likely be few and far between,” said Murray. “More often, Justice Jackson will find herself outflanked by the Court’s ascendant conservative bloc. In such circumstances, her dissents may provide succor to disappointed progressives. For the meantime, it will have to be enough.”

But is that enough? I, for one, would like to think that Jackson can do more.

Harvard Law professor Laurence Tribe offered a dose of optimism: “The perspectives and experiences she brings to the court as its first Black woman, and an incredibly brilliant woman at that, are bound to inform what even her most stubborn colleagues think about on which they haven’t firmly made up their minds already,” he said. (Query: Is there anything on which the conservatives “haven’t firmly made up their minds already”?)

As for Jackson’s inevitable role as dissenter, Tribe stressed that’s not to be discounted: “It’s not difficult to imagine her greatest dissents as a junior justice becoming the law of the land someday.”

Most of all, Tribe urged a long-term perspective. “The fact that she will find herself in dissent more often than not in the cases that matter most over the next few years shouldn’t obscure the degree to which things can change,” said Tribe. “She won’t even turn 52 until mid-September, so she’s likely to serve for at least 30 years. The world in which she is among the most senior justices will be very different from the world she inherits as the most junior of the justices.”

His prediction: “It’s not hard to imagine her one day becoming Chief Justice Ketanji Brown Jackson, breaking yet another concrete ceiling.”

Yes, patience is in order. After all, Clarence Thomas waited 30 years to get his day in the sun.

Vivia Chen
Columnist
Are Justice Thomas and Judge Jackson Opposites On Recusals? (1)
Bullied and Interrupted: Sexism, Racism at Judge Jackson Hearing
The First Black Female SCOTUS Nominee Must Be ‘Twice as Good’
The Next SCOTUS Justice Will Be a Black Woman. Deal With It.
© 2022 Bloomberg Industry Group, Inc.
All Rights Reserved