The Missouri senator has been leading the charge for traditional manhood. That’s a hard sell when you’re caught running for the hills.

Poor Josh Hawley. Try as he might, it seems he’ll never live up to his ideals of masculine glory.

How embarrassing for the strapping young senator from Missouri to be branded the “fleeing coward” of the Capitol insurrection—by his hometown newspaper, no less. Hawley earned that moniker, and others, when the Jan. 6 committee showed his famous fist pump in solidarity with the crowd gathering before the uprising, followed by footage of him sprinting out of the Capitol as the rioters got out of control.

Not exactly a profile in courage. But it sure was funny.

Even Ted Cruz couldn’t help laughing. Though the Texas senator said he had better things to do than watch the hearings—“mow my lawn,” “comb my hair,” “watch the paint dry on the walls”—he caught the Hawley video.

“I’ll admit—some of the Twitter folks setting it to music and the like, certainly worth a chuckle,” Cruz was quoted as saying, adding that he’s particularly fond of Hawley set to the “Chariots of Fire” theme song.

Josh Hawley running away to a variety of soundtracks.

I don’t know what’s more remarkable—that Hawley managed to reveal a more human side of Cruz (he has a sense of humor!), or that a supposedly brilliant politician could be this inept at playing the game.

For a guy with a resume that any Big Law firm would drool over—graduate of Stanford University and Yale Law School, and former clerk to Chief Justice John Roberts—Hawley is failing spectacularly. Instead of gliding onto the stage as the breakout star of the Republican Party and positioning himself as a future presidential contender, he’s become a laughingstock.

And he did it by his lonesome.

Hawley has made masculinity his hallmark—exalting, presumably, men of gallantry who would put women and children first in the face of danger. While other Republicans have made noises about masculinity—Senate candidate J.D. Vance from Ohio defended Kyle Rittenhouse’s shooting of rioters in Kenosha, Wisconsin, and tweeted “masculinity is good” after a veteran fought robbers at a store; and North Carolina Rep. Madison Cawthorn urged mothers to raise sons to be “monsters”—Hawley has made it his raison d'être.

In a speech at the National Conservatism Conference last year, Hawley lamented the decline of traditional masculinity. Because of liberal messaging about “toxic masculinity” and suggestions “that their manhood is the problem,” he said, “more and more men are withdrawing into the enclave of idleness, and pornography, and video games.” And, he added, that’s why we’re also seeing a decline in the number of males in higher education and an uptick in unemployed men. He also blamed the media, the vaccine mandate, critical race theory, and the liberal kitchen sink for emasculating the American male.

“While the Left may celebrate this decline of men,” Hawley said in his rallying cry, “I for one cannot join them.”

Such noble sentiment. And if you’re hankering for more of the same, you’re in luck. Hawley is coming out with a book next year, grandly titled, “Manhood: The Masculine Virtues America Needs.”

So how will it sell? Well, let’s just say it’s awkward to make red-blooded American masculinity your brand when you’re caught running for the hills.

Meanwhile, Hawley is doubling down. “I just want to say to all of those liberals out there and the liberal media, just in case you haven’t gotten the message yet, I do not regret it,” Hawley was quoted as saying in a speech reacting to the video shown by the Jan. 6 committee. “And I am not backing down. I’m not gonna apologize, I’m not gonna cower, I’m not gonna run from you.”

One can have a field day with those remarks. Suffice it to say, Hawley comes off as a whining weasel. 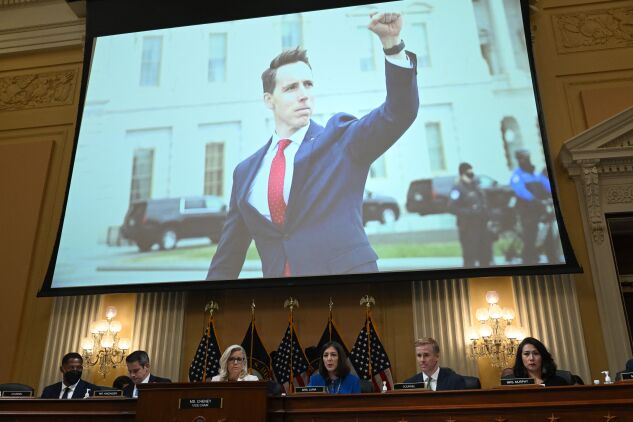 If Hawley’s party really needs a new mascot for machismo—some sort of reassuring John Wayne figure—I have a suggestion: Rep. Liz Cheney. I know that might be too gender-bending for some but Wyoming’s sole member of the House, one of only two Republicans on the Jan. 6 committee, actually embodies “responsibility, bravery, fidelity, and leadership”—all that manly stuff Hawley is hyping in his book.

I mean, if you were facing a pack of wolves in the wilds of Wyoming or the halls of Congress, is there any doubt which one you’d turn to?