A gloomy year for capital markets lawyers has them hoping for brighter skies in 2023.
Michael Nagle/Bloomberg

There’s some good news for capital markets lawyers: 2022 is over.

It was a dismal 12 months for US initial public offerings, which raised just more than $18 billion last year, according to data compiled by Bloomberg. That’s down more than 95% from the record $275 billion raised in 2021, propelled by a boom in blank-check companies that have since fallen off the map.

Some Big Law practitioners are cautiously optimistic that the market will thaw this year, but nobody’s expecting a return to the boom times. Companies considering a public offering are still grappling with an unpredictable market as the US Federal Reserve continues to raise interest rates to tamp down inflation.

“It will probably take some of the bigger named companies that have stronger financials and profitability to return to the market as the first movers, and hopefully that will open up the market and others will follow,” said Marcel Fausten, a New York capital markets partner at Davis Polk & Wardwell. 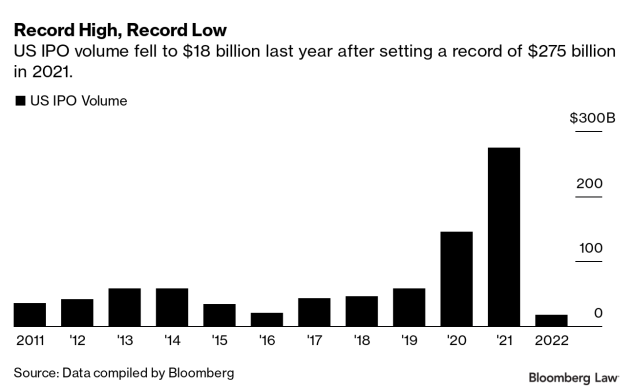 Only two firms who placed in the top 10 advising issuers or underwriters in 2021 had a less than a 90% decline in deal value last year. Weil Gotshal & Manges, experienced an 88% drop in issuer-side work from 2021 to 2022. Ellenoff Grossman, which focuses on special purpose acquisition company work, saw its underwriter-side practice fell a “mere” 84% from 2021’s record.

Some firms that helped companies raise more than $10 billion in 2021 advised on IPOs raising a total of less than $1 billion last year, according to data compiled by Bloomberg. Latham & Watkins, Kirkland & Ellis, Cooley, and White & Case are among the big names on the list. 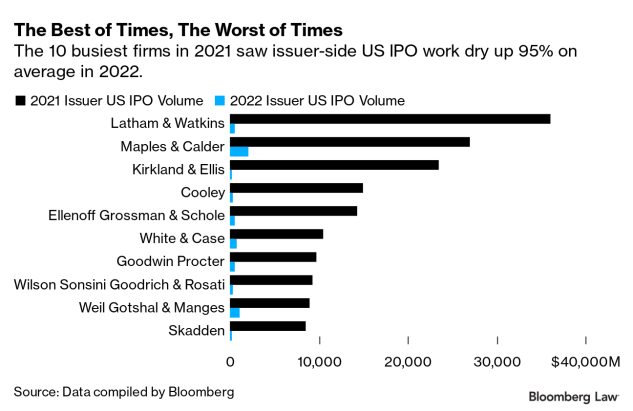 The same dynamic occurred on the underwriter side, where firms including Skadden, Latham, Kirkland, Goodwin Procter, Cooley, and Shearman & Sterling, advised on deals worth less than $1 billion. Those firms all saw at least a 93% decline in that type of work this year, the Bloomberg data show.

Douglas Ellenoff, a partner at Ellenoff Grossman, said despite the turmoil SPACs have proven they’re a “viable, legitimate way of going public.” Still, he acknwledged it was “a rough year” and that SPACs and traditional IPOs alike need to see better trading performance.

“At some point, everybody has to focus on returns and performance,” he said.

The top 10 firms in IPO value from 2021 on both the issuer and underwriter side averaged a 95% decline last year, the data show. 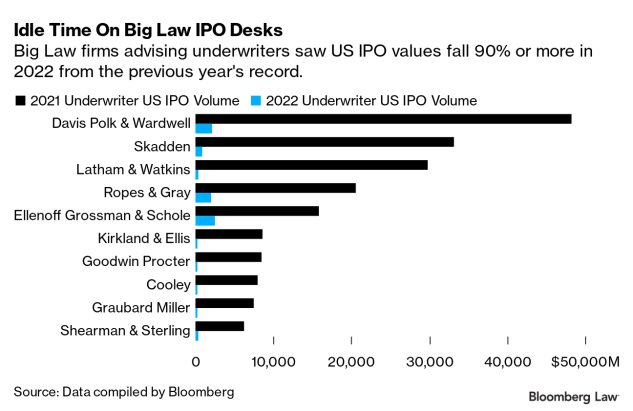 Some law firms, including Cooley and Kirkland, have laid off lawyers in an effort to right-size their associate ranks to the current level of relatively depressed demand.

Private companies are still adjusting to significant declines in public market valuations, Davis Polk’s Fausten said. He is cautiously optimistic that the IPO market could reopen in the second half of the year.

“A lot of private companies have valuation expectations still grounded in what people were seeing in ‘21 and have not necessarily readjusted,” Fausten said. “There’s a process of those valuations being brought down to be more in-line to their public peers.”