Hispanic lawyers continue to trail other minority groups in reaching the top of major law departments despite being the largest minority workforce in the nation.

Hispanics held 2.2% of all general counsel jobs in the Fortune 1000 this year. The 22 Hispanic general counsel at the country’s largest companies is an increase of just one top lawyer since 2019, according to Jean Lee, CEO and president of the Minority Corporate Counsel Association, which tracks diversity data.

Building the number of Hispanic general counsel in America’s biggest corporations could go a long way toward improving diversity in the legal industry. Top corporate lawyers have a wide influence on who is hired and promoted, not just internally, but at their outside law firms.

To get more Hispanic lawyers into the general counsel’s office, diversity advocates say there will need to be an active effort from all legal chiefs across the board to find and support Hispanic talent at every step of their career paths.

“The problem is along the entire continuum, from education all the way through professional achievement, but I think you do have to start getting people into these positions, as well as increasing the number of Latinos who view a career in the law as achievable, attainable, and something that they can succeed at,” said Kim Rivera, chief legal officer and president of strategy and business management at HP Inc., based in Palo Alto, Calif.

Hispanics make up 17.6% of the country’s overall workforce, the largest of any racial or ethnic minority group, according to the Labor Department’s Bureau of Labor Statistics.

“The issue, in my mind, is an issue of unconscious bias,” said Ricardo Anzaldua, the general counsel and executive vice president of The Federal Home Loan Mortgage Corp. “People generally are more comfortable dealing with people who are like themselves, and it goes the same for lawyers as it does for anybody else,” said Anzaluda, whose Virginia-based company is commonly known as Freddie Mac. 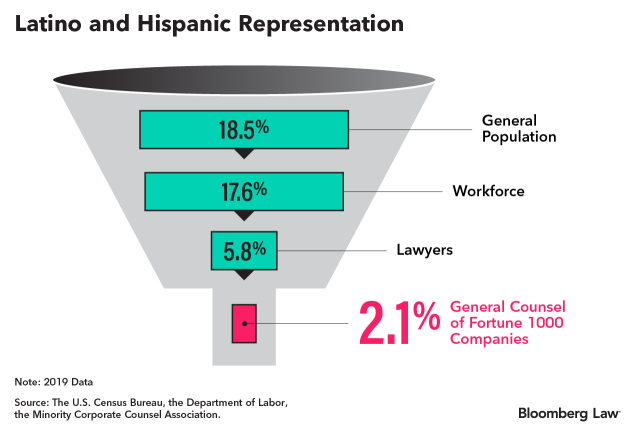 There has been some progress. According to a new MCCA survey, only 0.7% of Fortune 1000 general counsel were Hispanic in 2004. But Hispanic representation has grown more slowly than other minority groups tracked by the MCCA.

The problem may start at the law firm level, where many attorneys prove themselves and build client relationships before going in-house. Anzaldua recalled it wasn’t easy when he was a Big Law associate.

“They threw you into the pool, so to speak, and you could sink or swim, and it didn’t matter whether you were a minority or not. But if you’re not a minority, and you can relate to somebody who’s in the partnership and get some help, get support, then your chances of swimming are lots better,” Anzaldua said.

Rivera said recent dialogue around race, including Black Lives Matter, has highlighted lack of diversity across the board, shifting the onus away from just minorities themselves to fix diversity in law firms and corporations.

“The conversation has opened up now to ‘What does everybody else have to do?’ That’s a very different conversation,” Rivera said. “To make it to the general counsel chair at big companies requires a lot. You have to be not only smart and tenacious and hardworking and clear about what you’re trying to achieve, you actually need to have opportunities, experience, a network, mentors, supporters, sponsors.”

One major move to get Hispanic lawyers into the general counsel’s office is Poder25, an initiative founded by the Hispanic National Bar Association in 2017.

“Putting an initiative around it creates a focal point. It creates a way of getting our allies to support us on this. And I’ve seen a lot of traction from partners at law firms, from other senior in-house leaders, from recruiters that are not Latino but are very interested in promoting diversity,” said former Poder25 cohort member Jose Gonzalez, who is also the general counsel of Chicago-based CNA Financial Corp.

Poder25 comprises two cohorts, the “GC Ready,” and the “Nexters.” The program offers networking and training opportunities, and there are currently 65 total members.

Sonia Zeledon, associate general counsel of The Hershey Company, based in Hershey, Pa, and vice chair of HNBA’s corporate counsel division, said she is confident Poder25’s goal will be met.

“We have tremendous talent within the Latino community,” said Zeledon. “The question is whether corporations are willing to commit to increasing the numbers of Latino general counsel.”

The pool of Hispanic talent is expected to grow, Gonzalez added, noting that a quarter of the U.S. population under the age of 25 is Hispanic, but that won’t automatically lead to an increase in Hispanic general counsel.

(Updates with MCCA survey statistics in tenth paragraph and population estimates from Gonzalez in second-to-last paragraph.)