Director of Legal Operations Mary O’Carroll, who built the ops function at the technology giant from the ground up, has departed after 13 years to become digital contracting company Ironclad’s first chief community officer.

O’Carroll, who joined Mountain View, Calif.-based Google in 2008 as its first legal operations professional, will also exit her role as president of the Corporate Legal Operations Consortium, an organization she helped found in 2016 along with other prominent ops leaders. She’ll remain a CLOC member but has stepped down as president, per the group’s policy on tech vendors in leadership roles. Her successor is Mike Haven, Intel Corp.'s head of legal operations and associate general counsel.

“For the legal operations field, it doesn’t get much better than being the president of CLOC and leading this incredible 60-person team at Google,” O’Carroll said in an interview this week. “I’ve always had this passion for the transformation of the business of law, and I’m definitely not done with that.”

The company counts Google-owned FitBit as a customer and also named companies like L’Oreal, Mastercard, and Staples as clients in a Thursday statement. Ironclad has also partnered with Google Cloud to use its artificial intelligence for its smart contracting models, according to Ironclad’s website.

“We exist to empower the passionate, energized innovators who are changing the way contracting works,” said Ironclad CEO and co-founder Jason Boehmig in the statement. “There is no one better than Mary—a visionary who helped establish legal operations—to lead that community.”

O’Carroll said she hopes to “create the world’s leading community focused on digital contracting” in her new role.

Her career in many respects mirrors the recent growth of the legal operations industry, which has become an increasingly important part of many legal departments in the last decade. Over 60% of departments now employ at least one legal operations professional, up from 21% in 2015 according to the Association of Corporate Counsel survey data. 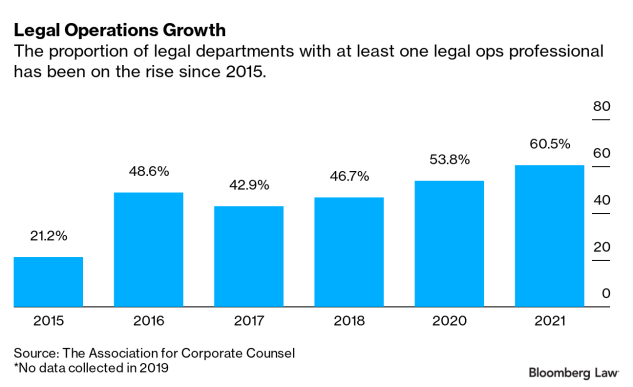 Before moving to Google, former investment banker O’Carroll worked for law firm Orrick, Herrington & Sutcliffe, where she was a profitability manager and advised the Big Law firm on operations and management practices.

When she arrived in-house at Google, she said she found a dramatically different legal operations regime than exists today.

“My general counsel said, ‘We’re spending tons of money with outside counsel, but I don’t know where its going, with whom, on what. We don’t have information, it’s just this black box,’” O’Carroll recalled.

She said Google had an e-billing system at the time, but didn’t have the tools and processes in place to produce enough actionable data about legal spend, especially given the company and law department’s projected growth. She advocated for a system overhaul.

“I said, ‘If this doesn’t work out you can fire me, because I believe that strongly that this is the way,’” she said.

O’Carroll later brought this problem solving drive to CLOC, where she and other legal department operations leaders, including many from other Silicon Valley tech companies, have shared information about their best practices and built a network. The organization has in recent years expanded to include the entire “ecosystem” of legal operations stakeholders, including law firms.

O’Carroll said part of the inspiration for her move to Ironclad is to address weaknesses in the legal industry’s contracting processes she calls “the 80% problem.” She said she believes contracting is the biggest challenge that legal departments face, and improving it could be transformative.

“No one will tell you that their contracts process is optimal,” O’Carroll said. “The speed at which you can execute them and the data that’s in the contracts is just so core, not just to legal, but to the sales team and the finance team, and to the CEO, frankly.”

The global pandemic and the subsequent shift to remote work only accelerated the importance of efficient processes and digitization in law departments, according to O’Carroll. She said that the effects of recent financial pressures on law departments are reminiscent of how the 2008 financial crisis was a driving force for the initial rise of legal operations.

“When there are times of constraint and the businesses are under a lot of pressure, the legal department and the general counsel also start feeling that pressure to prioritize ruthlessly, to be more efficient,” she said. “We get constrained budgets and headcounts, but the work still keeps coming at us. It’s not like we can turn off demand.”