Justice is facing calls to recuse himself from U.S. Supreme Court cases involving the 2020 presidential election after revelations that his wife repeatedly pushed former President ’s chief of staff to do more to overturn his loss to Joe Biden.

Thomas already participated in the Supreme Court’s this year to let some of Trump’s papers be turned over to a congressional panel investigating the Jan. 6, 2021, Capitol attack. Thomas was the lone dissenter from that order, giving no explanation.

“I think it’s a big problem,” said , a judicial ethics scholar who teaches at New York University Law School. “Justice Thomas should have recused himself from any case that concerned, and any that hereafter concerns, the validity of the election, the work of the Jan. 6 commission, or the Capitol invasion.” 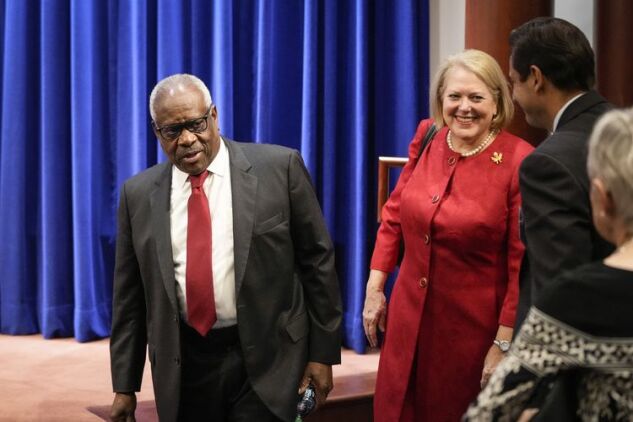 The Washington Post reported Thursday that Ginni Thomas, a political activist, was in close contact with Trump Chief of Staff in the weeks following the 2020 election, promoting conspiracy theories about ’s victory. “The majority knows Biden and the Left is attempting the greatest Heist of our History,” she texted on Nov. 10, the Post reported, citing documents Meadows turned over to the committee.

A person familiar with the text messages confirmed their authenticity to Bloomberg.

Another person familiar with the activities of the House committee investigating the Jan. 6 Capitol attack said its members are discussing whether to have Ginni Thomas appear for closed-door questioning -- either voluntarily, or under subpoena, if need be. But no decision has been made as of Friday. Not all committee members -- who have not gathered as a group since the texts were leaked -- believe it is necessary, that person said.

“Judges are obligated to recuse themselves when their participation in a case would create even the appearance of a conflict of interest,” Wyden said in an emailed statement. “A person with an ounce of commonsense could see that bar is met here.”

The activities of Ginni Thomas, 65, are creating another layer of controversy around a justice who has been one of Washington’s most polarizing figures since 1991, when he won Senate confirmation after denying sexual-harassment allegations during a televised hearing that transfixed the nation. It comes as Thomas, 73, Friday after a weeklong hospital stay to treat an infection.

Federal law requires justices to disqualify themselves whenever their “impartiality might reasonably be questioned.” Judicial ethics experts said Friday that cases involving the 2020 election and Jan. 6 Capitol siege meets that standard for Thomas.

Thomas should recuse “from Jan. 6 cases, because she was clearly involved,” said , a University of Minnesota Law professor and former White House ethics lawyer. “That doesn’t mean she committed any crimes but she was close enough to the events of Jan. 6 that he should recuse.”

Ginni Thomas earlier this month told the Washington Free Beacon that she was at the Jan. 6 rally near the White House but went home before Trump took the stage and didn’t go to the Capitol.

Thomas hasn’t recused from any cases during the court’s current term, which started in October, according to Gabe Roth, executive director of the watchdog group Fix the Court.

The Supreme Court isn’t covered by the Code of Conduct that applies to other federal judges, and recusal decisions are largely up to the individual justice. Chief Justice has said the justices consult the code for ethics issues.

House Minority Leader said Friday he believes it’s up to Thomas to decide whether he needs to recuse.

“Justice Thomas could make his decisions like he’s made them every other time,” McCarthy said at a news conference concluding the House Republican policy retreat in Ponte Vedra Beach, Florida. “It’s his decision based upon law.”

, a former Thomas law clerk and president of the conservative Judicial Crisis Network, said the attacks on her former boss were politically motivated.

“The left’s partisan crusade to force Justice Thomas off of cases is not based on real recusal standards but on politics,” Severino said in an emailed statement. “Liberals don’t like the fact that he is Black and won’t follow their agenda, so they invent flimsy controversies to discredit him for thinking for himself.”

The congressional panel has had more than two dozen Ginni Thomas-Mark Meadows messages for months, according to the person familiar with the texts. They are among thousands of emails and other communications and documents Trump’s last chief of staff turned over to the committee on Nov. 26 and Dec. 7.

The first of those Thomas-related exchanges is dated Nov. 5 and the last is from mid-January 2021. The documents may not reflect all the exchanges between the two because Meadows stopped cooperating with the committee late last year, failing to show up depositions in November and early December.

Ultimately, the House voted to cite him for contempt of Congress, and the House has referred its contempt action to the Justice Department.

Committee Chair revealed in a Dec. 7 letter to Meadows’ lawyer, , that the committee has a ”privilege log” indicating Meadows withheld from the panel over 1,000 text messages from his personal mobile phone. Terwilliger did not return multiple calls or messages for comment.

The Ginni Thomas exchanges with Meadows that are in the committee’s possession have not been a significant focus of its investigation -- and their existence was not publicly or widely known until this week. Much of the committee’s work has been conducted behind closed doors, with an eye to holding public hearings by May.

But her activities present the appearance of conflict for Thomas, legal ethics experts said.

“The public will assume that Justice Thomas knew about Mrs. Thomas’s activities or that he intentionally tried to avoid that knowledge, which in the law is the same thing as knowledge,” Gillers said. “You can’t close your eyes to the obvious and then excuse your behavior by claiming ignorance.”