What’s a nice firm doing in a case that could jeopardize Native American rights?

Gibson Dunn & Crutcher’s latest pro bono newsletter touts work for immigrants, advocates for social justice, Afghan refugees, supporters of reproductive rights, and what it generally calls, “some of the most vulnerable members of our communities.”

But what’s not highlighted is a matter that could soon come before the U.S. Supreme Court with major repercussions for the Native American community. The case is Brackeen v. Haaland, and what’s surprising is that Gibson Dunn is seeking to overturn a landmark legislation championed by Native Americans. At issue is the constitutionality of the Indian Child Welfare Act and whether it is racially discriminatory. Enacted in 1978, ICWA addressed the forced removal of Native American children from their families and communities that’s been long part of American policy. The law gives preference to members of the Native American nation in custody matters.

What puts Gibson Dunn right smack in the political/cultural cross hairs is that firm partner Matthew McGill is arguing that ICWA discriminates against non-Native Americans who want to adopt Native children. (The name plaintiffs, Chad and Jennifer Brackeen, are an affluent White couple. Though they won the right to adopt their son in Texas state court, they’re now challenging ICWA in federal court for the adoption of their son’s half sister.) Moreover, “red” states Texas, Louisiana, and Indiana have joined the case as plaintiffs, claiming that the law violates states’ rights.

Asserting that White parents are victims of a law that addresses racism and genocide against Native Americans and aligning yourself with Texas Attorney General Ken Paxton—hey, what can possibly be controversial about that? As Nick Estes, a citizen of the Lower Brule Sioux Tribe, writes in The Guardian, the terms “reverse racism” and “state’s rights” are “codewords frequently associated with dismantling anti-racist policies.” He adds, “the spirit of [General] Custer still haunts the fate of Native children even today.” 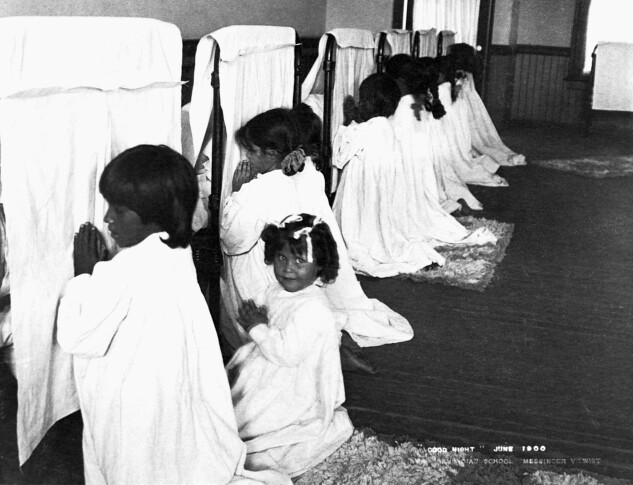 Girls at the Phoenix Indian School in Arizona, June 1900.
(Photo by © CORBIS/Corbis via Getty Images)

The Brackeen case is traveling a slow, bumpy path to the Supreme Court. In 2018, Judge Reed O’Connor of the U.S. District Court for the Northern District of Texas ruled in their favor, deciding that ICWA was racially discriminatory. However, in April, the Fifth Circuit Court of Appeals issued a mind-boggling 325-page opinion by 16 judges that left the constitutionality of the law up in the air—which is why bets are on that the Supreme Court will hear the case. In September, plaintiffs, along with the Solicitor General and tribal nations filed petitions for certiorari with the Supreme Court.

The Native American community is up in arms that ICWA might be overturned. Not only would they lose priority in custody matters but tribal sovereignty could be decimated, say proponents of the law. So what’s a nice (mostly liberal?) firm like Gibson Dunn with a progressive leader, Barbara Becker, doing in this unholy mess?

No doubt, the firm knows it has a hot potato in its hands. Asked about the representation, the firm spokesperson Pearl Piatt essentially said that pro bono is an individual matter: “Gibson Dunn’s pro bono program is incredibly diverse, reflecting the diversity of our attorneys. We support our attorneys’ efforts to raise significant constitutional issues of national importance on behalf of our clients.”

The stakes couldn’t be higher, say legal scholars who specialize in American Indian law. “This litigation is incredibly important for the Indian nation,” says Elizabeth Reese, who’s the first Native American faculty member at Stanford Law School. “The Act was passed because the US government was engaged in horrific policies that targeted Indian children—policies designed to destabilize tribal sovereignty.” Keeping the statute intact, she adds, “is incredibly important to safeguarding tribal survival.”

“Brackeen is the most significant case of the 21st century, without question,” says Matthew Fletcher, professor and director of the Indigenous Law & Policy Center at Michigan State College of Law, who’s also a member of the Chippewa Indians. ”The challenges to ICWA are varied, so dependent on how the Court rules, the consequences could be monumental.”

What’s worrying the Native American community is the proverbial slippery slope—that invalidating ICWA in the adoption context might lead to the eradication of its hard-earned rights on other fronts. In fact, some members have suggested that the adoption issue is just a smoke screen for what’s really motivating the law’s antagonists: corporate greed. If the Supreme Court rules ICWA unconstitutional, warn the law’s advocates, it could invalidate Native American protection with respect to land and natural resources and the casino industry, opening the floodgates to businesses in the energy and gaming sectors.

Some commentators are singling out Gibson Dunn for special scorn. In The Guardian, Estes asks: “So why are corporate law firms like Gibson Dunn–which has represented Walmart, Amazon, Chevron and Shell and is a former employer of the far-right Arkansas senator Tom Cotton–showing up at custody battles to square off with poor Native families and tribes? Are they really interested in the welfare of Native children?” Native American journalist Rebecca Nagle also railed against the firm in a podcast, noting, “Gibson Dunn also specializes in the other industry that comes up against tribes a lot: oil.”

Before I go on, permit me to say that some of the criticisms seem naive. Although I often call out firms for hypocrisy, it’s silly to lambaste firms for the clients they serve. I mean, what major law firm doesn’t represent rapacious corporate interests?

And what does Gibson Dunn partner McGill have to say about all this, particularly the charge that the real intent of the suit is to undermine Native sovereignty?

“This case is about preserving the Brackeens’ family and, especially, the continued well-being of their children,” McGill responded in an email. Whether the little girl at the center of the case “is adopted by the loving family that has raised her now for more than two years or sent to live with a Navajo relative will not impact tribal sovereignty in the least, but it will very much affect [her] well-being,” he added. “This case is about the well-being of that three-year-old little girl, not abstract notions of tribal sovereignty.”

Indeed, I have no reason to doubt that McGill is pursuing this case because he sincerely believes that ICWA hinders some Native American children from being placed with good families. We all know interracial/inter-ethnic adoptions are riddled with political baggage, and kids are often caught in the middle and pay the price. As a parent of two daughters adopted from China who is also friendly with people who have adopted children of a different race, I’m not unsympathetic to McGill’s position.

Yet, we can’t discount the possibility that there’s a conservative agenda or at least a conservative strain at play. Is it an accident that Texas, under the activist leadership of Attorney General Paxton, is working hard to defeat ICWA? Or that the Cato Institute and the Goldwater Institute—conservative think tanks that advocate state rights and libertarianism—are supporting the defeat of the law?

At the end of the day, I’m not sure what to make of the case. Is the intent of the lawsuit about helping children find loving homes? Or is this part of some right wing agenda to erode Native American interests to pave the way for good old American capitalism?

Of course, there’s always the chance it could be both.