FTX customers going outside bankruptcy court to recover losses from Sam Bankman-Fried’s failed crypto empire are using a legal path that has worked in past collapses such as WorldCom and Enron: They’re going after the supposed enablers.

Laws that freeze claims against debtors in bankruptcy don’t apply to third parties. So customers have filed more than a half-dozen proposed class actions against the NFL’s Tom Brady, accounting firm Prager Metis and Bankman-Fried as an individual, among others.

“When you have a massive financial collapse like FTX, there are going to be many, many institutions—and perhaps individuals—who allegedly profited improperly along the way,” said Samuel Issacharoff, a New York University law professor.

History shows such actions have a shot at paying off, said James Park, a UCLA School of Law professor. The implosions of WorldCom and Enron two decades ago, also amid fraud revelations, led to class-action settlements in the billions of dollars paid out by underwriters, banks and other parties.

“If you’re not able to recover from the primary violator, you’re going to have to bring the case against someone else,” Park said.

FTX and more than a hundred affiliates filed for bankruptcy Nov. 11 in the midst of a liquidity crisis that caused it to halt customer withdrawals. Lawyer Adam Moskowitz saw little use in what could be a drawn-out Chapter 11 process for the proposed class of FTX customers he represents.

“I’m looking at another 10-year bankruptcy trying to chase down where the money is,” Moskowitz said. “We want to stay as far away as possible from that bankruptcy court.”

Less than a week after the bankruptcy filing, Moskowitz sued nearly a dozen celebrity FTX endorsers, including Brady and comedian Larry David.

The celebrities and companies being targeted must decide to engage in a potentially costly legal fight or pay to settle so the claims go away.

“It doesn’t cost that much to file a lawsuit,” said Adam Pritchard, a University of Michigan law school professor. “And if Tom Brady will write you a check, it was worth it.”

Debacles like the one involving FTX can present opportunities for class-action lawyers, who earn a percentage of damage awards or settlements. Plaintiffs’ counsel who won a $7.2 billion award for investors of Enron got nearly 10% of the pot.

The lawsuit by Moskowitz and famed litigator David Boies’ firm, Boies Schiller Flexner, claims FTX’s yield-bearing accounts, which pay interest on crypto holdings, were unregistered securities. Brady and other celebrities are therefore liable for promoting an illegal product, they allege in the Florida suit. 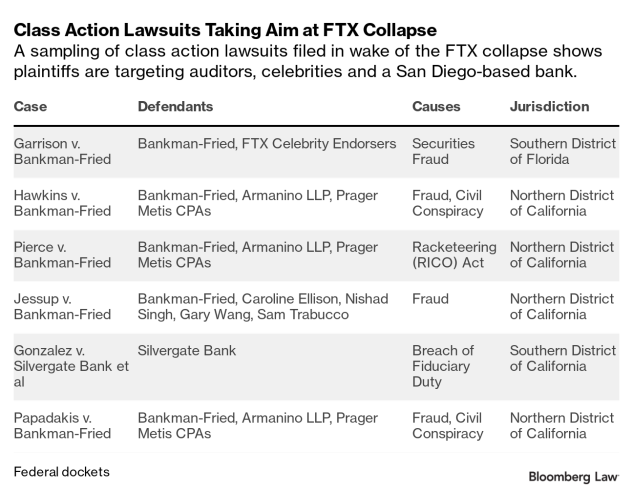 The case hinges on whether a judge rules the accounts are securities, in which a person can expect profits from the efforts of others, Pritchard said.

Latham & Watkins, which is representing Brady and several celebrity FTX endorsers, didn’t immediately respond to a request for comment.

Pomerantz is among multiple firms targeting two of FTX’s outside auditors—Armanino and Prager Metis—for alleged civil conspiracy in California. The auditors misled the public by validating the supposed financial health of FTX entities through their certified reports and public statements, Pomerantz alleges in its suit.

Several California boutique law firms have targeted Silvergate. The bank should be held liable for aiding fraud because FTX customer assets were commingled with Alameda Research in “plain sight” of Silvergate, one of the suits alleges.

Edelson PC, a firm most known for its privacy complaints against Big Tech companies, has targeted Bankman-Fried and other FTX executives for alleged fraud and unjust enrichment.

Bankman-Fried is facing eight criminal counts, including wire fraud for allegedly misusing billions of dollars in customer funds. He entered a not guilty plea on Jan. 3 in the Southern District of New York and faces an October trial.

The class actions face hurdles in collecting money for FTX customers. One question is how quickly, or slowly, the suits will move along as the Department of Justice pursues its criminal case.

“A lot of it will depend on the interest of the U.S. attorney’s office in whether it wants its case to go forward without adjacent private actions, and how deferential the courts will be,” Golan said.

Some claims will also face far higher bars to overcome than others, Park said. Third parties like auditors may be able to argue investors didn’t rely on them in their decisions to invest or do business with FTX and therefore can’t be held liable.

How laws apply to crypto adds another area of complication, he said.

The FTX implosion makes for “an attractive case” for class action firms, Park said. “On the other hand, it could be pretty risky because it’s an uncharted area of law.”